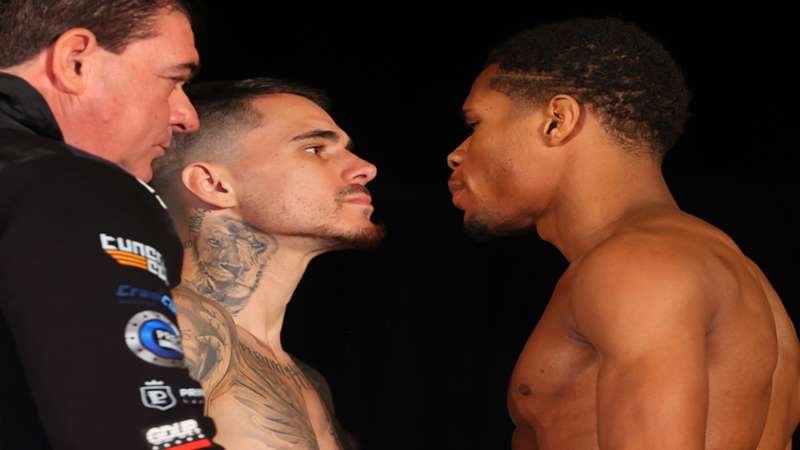 The undisputed lightweight championship of the world is at stake.

Devin Haney had the odds against him going into Saturday's undisputed lightweight title fight against George Kambosos Jr. Haney was traveling to Kambosos' native Australia. He wouldn't have his entire corner there with him. His father and head trainer, Bill, couldn't secure a visa until late Thursday and made it just in time to watch his son try to accomplish his dream. And Kambosos spewed trash talk all fight week to get inside Haney's head.

Haney remained mentally strong and let none of it faze him in the slightest bit as he skipped and smiled to the ring at Marvel Stadium in Melbourne, Australia, amid a chorus of boos in front of 41,129 people. The 23-year-old went in there and showed why he's one of the best in the world but outboxing and dominating Kambosos from start to finish to win by unanimous decision (118-110, 116-112, 116-112) to become the undisputed lightweight champion. DAZN had it scored 119-109 for Haney. The victory makes Haney the first fighter in the four-belt era to become the undisputed champion at 135 pounds. The last fighter to become the undisputed lightweight champion in any period was Pernell Whittaker in 1990.

Haney (28-0, 15 KOs) came right out and shut down the crowd and Kambosos by firing the first of 333 jabs, according to CompuBox. He kept blasting away with the jab that it left Kambosos with a battered and bruised face.

Kambosos (20-1, 10 KOs) had no answer. The former three-belt lightweight stayed too much Haney's range, wouldn't pull the trigger, and applied little pressure. That plan made it an easy night at the office for Haney. Whenever Kambosos moved off the center line, Haney would blast a right hand and go right back to the jab. He would see Kambosos only throwing two shots at a time, which allowed Haney to tie him right up, release, and go back to the jab.

The victory makes Haney the youngest undisputed champion in the four-belt era.

Kambosos does have the right to an immediate rematch in Australia. But it is unknown if he'll invoke it.

Here is what happened at George Kambosos Jr. vs. Devin Haney.

A historic night is upon us, so grab the refreshments and enjoy as we provide results and highlights of Kambosos vs. Haney.