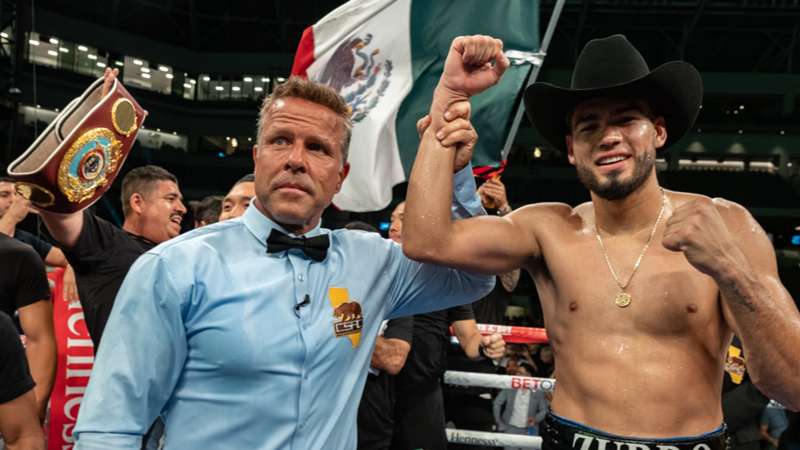 Golden Boy Promotions
Watch Zurdo vs. The Monster on DAZN

The former super-middleweight champion marches on towards a future title shot.

In his next fight, Gilberto Ramirez wanted a crack at WBA (super) light heavyweight champion Dmitry Bivol. Unfortunately, "Zurdo" didn't get what he wanted, but a victory gets him into the mandatory position.

Ramirez will take on Yunieski Gonzalez on Saturday, Dec. 18 from the AT&T Center in San Antonio, TX, live worldwide on DAZN. The winner becomes the mandatory challenger for Bivol, who currently doesn't have a fight scheduled. The co-main event features DAZN News' No. 5 women's pound-for-pound fighter Seniesa Estrada as she defends her WBA Minimumweight title against unbeaten Maria Santizo.

Ramirez (42-0, 28 KOs) is a former WBO super-middleweight champion. He made five successful title defenses before moving up to 175 pounds. The 30-year-old is 3-0 with all the victories inside the distance. Most recently, Ramirez notched a fourth-round knockout of Sullivan Barrera in July. While he failed to get Bivol inside the ring this time around, he's glad he gets the chance to close 2021 on a good note.

"I'm happy and excited to be back in the ring before the year ends and showcase my talent again in Texas," Ramirez said in a press release. "Of course, I was a little disappointed that Bivol didn't want to sign the contract and make the fight happen, but that's boxing. I know my team and Golden Boy have been working strategically to make this happen, and I will not disappoint all my fans on December 18.

"Yuneski is a tough Cuban fighter, and I know I will need to be my best that night. With this being the WBA World Title eliminator, I know he will do everything to change his life with this fight. Once this fight is over, Bivol will have nowhere to run and will have to face me."

Gonzalez (21-3, 17 KOs) has had a successful career in the light heavyweight division. He has stayed busy in 2020 and 2021, facing and defeating Guillermo Romero, Alex Theran, and Tommy Karpency by consecutive knockout victories. The heavy-handed fighter has been seeking an elusive world title fight and will get closer to his goal if he can defeat Ramirez.

"I am coming to give my all December 18," Gonzalez said. "It will be an interesting fight since I am the only Cuban boxer who's not a 'runner,' so fight fans will enjoy every minute of all the action. I have worked hard for the last year and a half, and it has paid off. I fight for freedom for thousands of kids who don't have this opportunity. I'm coming to give Texas a night to remember."

Estrada (21-0, 8 KOs) won the WBA belt in March with a decision win over Anabel Ortiz. However, Estrada gained more hardware in her last time when she moved up to junior flyweight and beat Tenkai Tsunami also via decision to win the WBO title.