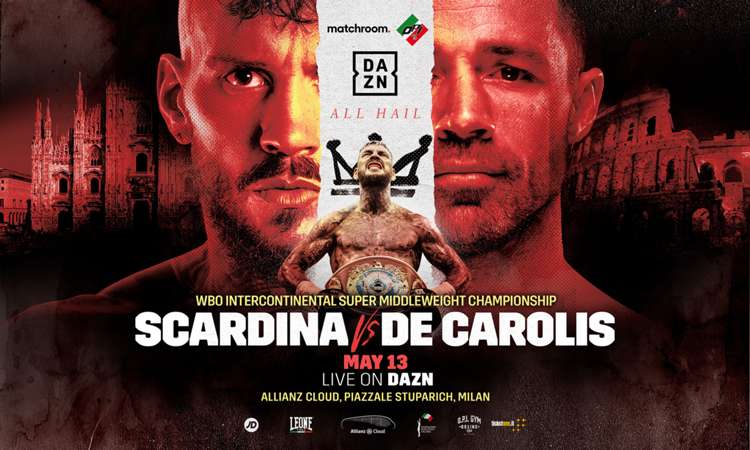 Matchroom Boxing
Watch Zurdo vs. Boesel on DAZN (except Mexico)

An upset in Milan.

Daniele Scardina had been tabbed a rising star on the European boxing scene and a contender to fight for a world championship.

For now, those aspirations were dashed on Friday at the Allianz Cloud in Milan as Giovanni De Carolis dropped Scardina twice and stopped him at the 0:10 mark of the fifth round.

De Carolis (31-10-1, 15 KOs) came out as the aggressor. He was trying to control the ring, work inside the clinch, make it a dirty fight and push Scardina back with the jab and right hand. Scardina was content with continuing to gather intel. But that nearly cost him as near the end of the round, De Carolis caught him with a looping right hook and wobbled him for a quick moment. De Carolis tried to finish things off but ran out of time.

About a minute into the second, De Carolis almost caught Scardina again, this time with a left hook. However, Scardina bit down on his mouthpiece and trudged forward. Furthermore, a left hook stopped De Carolis in his tracks and focused on pounding the body. But De Carolis stormed right back with 30 seconds remaining as he once again nailed Scardina with another flush left hook.

Scardina (20-1, 16 KOs) finally shook the cobwebs in the third and especially the beginning part of the fourth round. He established the jab, which helped the native of Italy connect on the right hand and started to make De Carolis reluctant to come fire back. That changed in a moment's flash as flurry of power shots punctuated by a left hook dropped Scardina. De Carolis went wild, thinking he’d won the fight. The referee looked like a deer in the headlights on how he should handle it as Scardina was on shaky legs and staggering all over the place. Somehow he convinced the referee to let him continue. That almost came to a screeching halt as a right hook nearly sent Scardina back to the mat as the round ended.

Scardina might have survived the fourth, but De Carolis ensured he didn’t make it out of the fifth. He landed a right hook followed by a vicious right uppercut to send Scardina rocking one more time. As Scardina went to the ropes, De Carolis landed a left hook. After missing a wild left hook. De Carolis closed the show as he walked towards Scardina and unloaded a blistering left hook. Scardina was on his way to falling face first when De Carolis hit him with two short right hands for good measure to send him to the canvas to close the show as the referee finally did the right thing and waved the fight off.