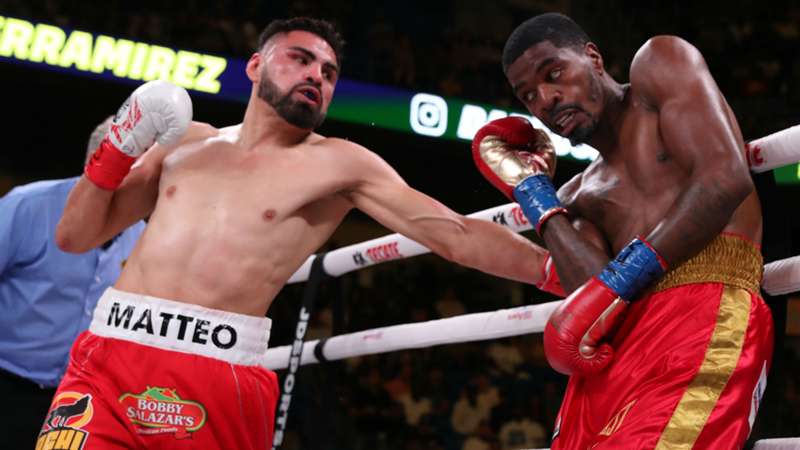 DALLAS — Jose Ramirez vs. Maurice Hooker had all the makings of a fight of the year candidate, until it suddenly came to a halt when Ramirez unified the WBO and WBC super lightweight titles with a devastating sixth-round stoppage of Hooker on Saturday night in Hooker's hometown and live on DAZN.

This 50-50 fight at the College Park Center on the campus of the University of Texas at Arlington wasted little time winning over fans. A clash of styles turned into a scintillating showdown between previously unbeaten fighters, with Ramirez's pressure making all the difference. It was expected that Hooker would use his 80-inch reach and work from the outside while the 2012 Olympian knew he had to work his way inside to get Hooker's attention. Few, however, knew that the fight would produce early fireworks that would send the crowd into a frenzy and never let up.

It all started started when Ramirez sent Hooker down in the first round. It was clearly a slip but ended up being ruled a knockdown, which forced Hooker into having to fight from behind early. Sensing that Hooker may be desperate, Ramirez went to work on his opponent's body and refused to give him room to breathe. Hooker did have his moments whenever he was able to push his way off the ropes and bring the fight into the center of the ring. He plucked away at the jab and set up some impressive power shots, including a hard right hand that briefly wobbled Ramirez in the fourth round.

Again, Ramirez's pressure was simply too much. In the fifth, he drilled the hometown fighter to the body and set up thudding hooks upstairs just when Hooker's hands would come down.

And then, this heated bout in front of an ultra-hot crowd quickly came to a halt.

Both fighters slowed down in the sixth after fighting at a frantic pace over the fight's first 15 minutes, but a lazy jab from Hooker was all the opening that Ramirez needed. The 26-year-old fired a hard left hook that immediately decimated Hooker's equilibrium and sent him stumbling into the ropes. Ramirez wasted little time closing the distance and throttling Hooker with a bevy of power shots to force the stoppage at the 1:48 mark.

Ramirez improves to 25-0 (17 KOs) with the victory. More important, he added Hooker's WBO title to his WBC title and will await the winner of another unification bout between Regis Prograis and Josh Taylor later this year as he aims to become the undisputed king of the super lightweight division.

“I felt very confident within my skills just like any fighter," Ramirez said afterward. "A real champion has faith in themselves. I believe in my team, I believe in myself. I came here with one mission: to become the unified champion and I did it. I am the very best guy.”

Hooker aims to come back stronger after suffering the first loss of his career.

“I just lost focus for a quick second," Hooker (26-1-3) said. "I was playing around with my jab hand and I lost focus. That just shows you, one second with a top fighter can change everything.”

Here's a look at how the full Hooker-Ramirez card went:

Result: Just as things were slowing down, Ramirez launched a counter left hook that wrecked Hooker. With blood in the water, Ramirez applied pressure and throttled Hooker with power shots until he earned the stoppage at the 1:48 mark of Round 6.

Round 6 (12:12 a.m.):  A slower start to this round. All of a sudden, Ramirez uncorks a left hook that destroys Hooker. Hooker tries to cover up but Ramirez is all over him and landing heavy. It's over!

Round 5 (12:08 a.m.): Hooker lands some solid uppercuts as Ramirez ducks inside. Ramirez rushes in and lands some hard body shots. He's really digging in. Hooker is freezing in there. Hooker rallies and slams a left hook into Ramirez's face. But Ramirez's pressure is the story in a fight that is shaping up to be a fight of the year contender. 10-9, Ramirez (49-45, Ramirez)

Round 4 (12:04 a.m.): Hooker lands a hard right hand to open the round. Ramirez slows down slightly but still working his way inside. Great short right by Hooker followed by a body shot. 10-9, Hooker (39-36, Ramirez)

Round 3 (12:00 a.m.): Ramirez is negating Hooker's reach advantage by closing the distance, but Hooker opens up on the inside for a brief rally. Ramriez drives in and pounds away a Hooker again. It's a tale of two fights with Ramirez winning. 10-9, Ramirez (30-26, Ramirez)

Hooker and Ramirez bring the HEAT to end Round 3!!! 🔥

Round 1 (11:52 p.m.): Ramirez applies pressure immediately. Hooker lands a right hand, and Ramirez drops him with a counter. It looked like a slip. An extremely hot crowd lights up whenever these two exchange. Hooker countering well while Ramirez continues to press. Both had their moments, but that's a Ramirez round. 10-8, Ramirez

Ramirez steps on Hooker's foot and gets rewarded a first round 'knock down.' 😶#HookerRamirez pic.twitter.com/hHPkAGLkga

11:41 p.m.: It's not his hometown, but Jose Ramirez gets a nice ovation from the crowd in Texas. This is Maurice Hooker's city, however, and the man from Oak Cliff, Texas, is receiving a rousing ovation.

Result: The scores of 119-108, 116-111 and 116-111 shouldn't be used as an indicator of how this fight went. Frenois brought the fight to Farmer but had a hard time finding a home for his punches. Farmer's defense was brilliant, and he scored with his jab when necessary. The 119-108 score is ridiculous, but the right man won.

11:06 p.m.: There have been a fair share of borderline punches by Farmer, but one clearly drifts low and costs him a point in the 10th. It may not matter, but you never know how the judges are seeing this fight — neither fighter has definitively taken off with it.

10:54 p.m.: Farmer has opened up a bit more on offense and is sitting down on his punches. That still hasn't been enough to get Frenois to stop throwing. A low blow in the seventh round sent Frenois into a frenzy of punches, and Farmer dodged nearly all of them. Again, Farmer is very impressive on defense but now appears to be interested in scoring in the later rounds.

"With Sweet Pea on his trunks .. Defensive excellence."

10:45 p.m.: Farmer is working but Frenois clearly isn't going to lay down and has landed some good shots. We're entering the sixth round and Farmer hasn't quite run away with this.

10:32 p.m.: The biggest takeaway after two rounds is the improvement Farmer continues to make as a defensive fighter. He may never have the power to get opponents out early, but he has learned how to make them miss and make them pay. He's up two rounds on Frenois, who is an unknown but arguably beat Jono Carroll in his last fight.

10:18 p.m.: The most active champion in boxing, Tevin Farmer, is up next, aiming to win convincingly and get closer to possibly landing a shot against Gervonta "Tank" Davis, who's also fighting tonight.

10 p.m.: After 10 rounds of action, judges see it in favor of Williams by unanimous decision (97-91, 97-91, 96-92). Williams was the sharper, more accurate puncher and more polished boxer overall. He showed a willingness to make it a phone-booth fight, even though he didn't have to.

9:45 p.m.: Another blatant low blow as the ref deducts another point from Vicente in the seventh round.

9:43 p.m.: Ref deducts a point from Vicente in the sixth round for a low blow. Williams is the sharper boxer, but this has been a good fight.

9:30 p.m.: Williams and Vicente still very much trying to feel each other out through three rounds. You get the feeling that we're on the brink of fireworks in this one, though.

9:15 p.m.: Tramaine Williams and Yenifel Vicente have made their way into the ring, and this welterweight tilt will pave the way for the co-main event, pitting Tevin Farmer, looking to defend his IBF super featherweight title, against Guillaume Frenoi.

8:38 p.m.: Well, that was fast. Williams drops Harris with a vicious left hook liver shot, and Harris doesn't even think about getting up. An impressive first-round KO for Williams just one minute and 51 seconds into the fight. Harris is still down in pain.

8:30 p.m.: Austin Williams against Jabrandon Harris in middleweight action on the way, as the crowd continues to file in.

8:25 p.m.: Dawejko and Hernandez both landed clean shots through 10 rounds, but judges saw it unanimously in the favor of Dawejko by the scores of   96-94 (twice) and 98-92, although the last score was too generous.

8 p.m.:  Both Dawejko and Hernandez looking for a fight-changing punch to land through four rounds in this bout scheduled for 10.

7:45 p.m.: Joey Dawejko vs. Rodney Hernandez in heavyweight action up next. This is a rematch from their split draw in April 2017. Dawejko has sparred against the likes of Anthony Joshua, Deontay Wilder and the newly-crowned unified world heavyweight champion, Andy Ruiz Jr.

7:35 p.m.: Ababiy remains undefeated with the unanimous decision (60-54 across the board). Calzada, 30, definitely made the 20-year-old work for the win, though.

7 p.m.: This undercard from the University of Texas at Arlington is officially live on DAZN, as we're about to get started with Nikita Ababiy taking on Yunier Calzada.