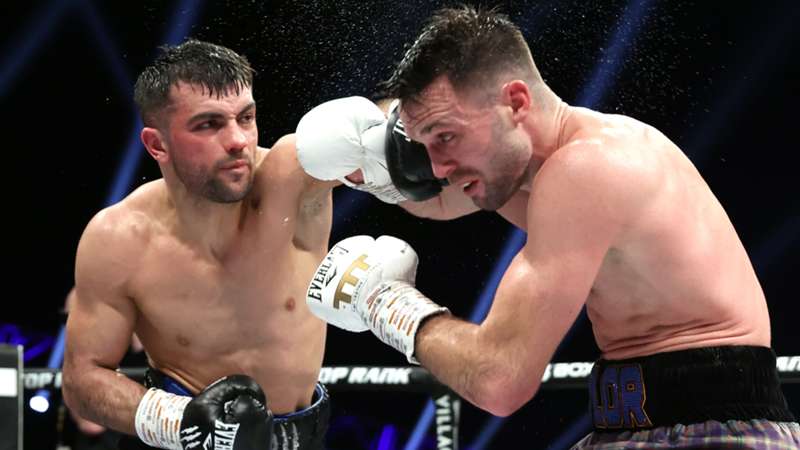 GettyImages
Check for Canelo-GGG on DAZN in your region

The English fighter wants his rematch.

Jack Catterall is still targeting a rematch with Josh Taylor as he weighs up his career options.

Catterall fought earlier in the year against the Scot for his homecoming match in a WBO mandatory defence, and was the clear underdog to many observers.

Nevertheless, Taylor put in an underwhelming display and a spirited effort from Catterall led many observers to believe that he was the rightful winner. However, Taylor was awarded the victory by the judges and a war of words has yet to be settled.

Taylor had planned to move up to welterweight in pursuit of bigger fights but, perhaps with the Errol Spence Jr. vs. Terence Crawford fight yet to take place, he has stayed at 140lbs and claimed he is keen to tee up a rematch.

Catterall, for his part, wants the same. He told Sky Sports: "Yeah definitely [a rematch with Taylor]. We all saw the controversy over the last fight, and there's definitely something to put to bed with Josh.

"Who knows...hopefully that fight can be made in the future and I would look to do the job properly this time and put it to bed.

"Initially the first few days [after the fight] were deflating, but I've got a great team around me, a great family. I'm in the gym, I enjoy being in the gym now and it's about using it as motivation.

"It's fire in the belly, and I think after that last fight I proved that I belong at the world level.

"I've had a lot of domestic fights over the years and I want to go on now and capture those world titles, so it's made me extra motivated to get back in and prove to everybody that I do belong at the top.

"Every cloud has a silver lining. I didn't get the result in Scotland in February, but the support I've had after the fight has been amazing and hopefully all the new fans can continue to support me going forward.

"Josh has said and done things after the fight I don't think the public have taken well to, but it is what it is. It's nothing to do with me.

"Ultimately, I would love to get that fight again and go and settle it."