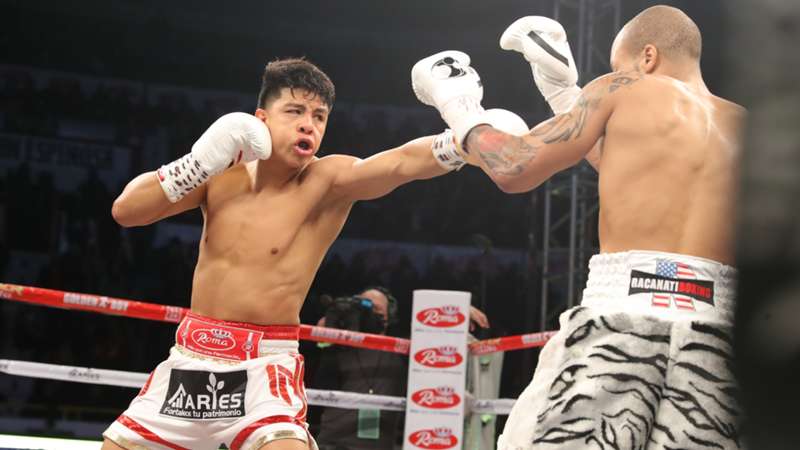 On Saturday, Jaime Munguia continued his journey towards a shot at middleweight gold as he battled D'Mitrius Ballard from Plaza Monumental de Playas de Tijuana in his hometown of Tijuana, Mexico. But, would Munguia be able to handle the pressure of fighting in his own backyard?

Munguia (39-0. 31 KOs) passed with flying colors as he dropped and stopped Ballard by TKO at the 1:47 mark of the third round. DAZN News had the fight even at the time of the stoppage.

Typically, Munguia is high-octane from the outset. Not this time around, as he was processing the intel and feeling Ballard out. The 25-year-old figured Ballard out quickly and went to work in the second. A left hook shook Ballard's knees for a moment, but Munguia could not capitalize in the short opening. Instead, Munguia started throwing combinations beginning with the left hook to the body and finishing upstairs.

Ballard came out aggressive to start the third. But his eagerness cost him as he threw a left, and Munguia blasted a check left hook that made Ballard stumble. Munguia smelled fish in the water. He got Ballard in the car and began teeing off to send Ballard to the canvas. Ballard made it to his feet. But he looked to his corner, looking for a way out. Munguia rushed Ballard and continued the onslaught. A left hook sent Ballard's mouthpiece out, and the referee waved it off.

The question is now, what's next for Munguia? He's ranked No. 1 by the WBO and WBC, which puts him in line for a shot at WBO titlist Demetrius Andrade or WBC titleholder Jermall Charlo.

Here is what happened at Jaime Munguia vs. D'Mitrius Ballard.

Munguia def. Ballard via TKO at 1:47 of the third round.

A triple jab from Ballard to try and back up Munguia to begin the third. Munguia started pounding the body. Ballard threw a left, and Munguia blasted a check left hook, making Ballard stumble. Munguia smelled fish in the water. He got Ballard in the car and began teeing off to send Ballard to the canvas.

Ballard made it to his feet. But he looked to his corner, looking for a way out. Instead, Munguia rushed Ballard and continued the onslaught. A left hook sent Ballard's mouthpiece out, and the referee waved it off.

facebook twitter whatsapp
Munguia begins the second with a double left hand. Left hook connects for Munguia buzzes Ballard. Munguia going back to the body. Big left to head from Munguia. Double jab by Ballard. Four-punch combination by Munguia. A one-two from Ballard. Better round for Munguia. (10-9 Munguia, 19-19)

facebook twitter whatsapp
Not much in the opening 90 seconds. Lot of exchanging jabs, which Ballard has the edge. Good double left to the body from Ballard. Body shot by Munguia but Munguia comes back with one of his own. (10-9 Ballard)

The time for talking is over. It's time to fight.

After what can be best described as an awkward second round, the third was the same. Zepeda sent Viedas to the canvas with a left hand. The beating continued as Zepeda got Viedas to the ropes and started unloading to send Viedas to a knee. Instead of letting him go down, Zepeda hit him while he was on his knee with a body shot to crumble Viedas.

Instead of calling for a disqualification for throwing a punch on a downed opponent, the referee counted Viedas out.

Horrible job by the official. A pretty easy call to make that wasn't made.

facebook twitter whatsapp
Zepeda looked to have everything under control when he sent Viedas to the canvas. Viedas came back swinging and sent Zepeda to the canvas. Zepeda roared right back and appeared to send Viedas down again with a left. But referee ruled it a slip and deducted a point.

Would be shocked to see Viedas make it out of the third.

facebook twitter whatsapp
It's time for the co-main event of Munguia vs. Ballard as William Zepeda (24-0, 22 KOs) squares off with Luis Viedas (29-11-1, 10 KOs) in lightweight action.

Zepeda is one to watch in the lightweight division. He's knocked out his last 14 opponents. Can he make it 15?

Diego Torres wins by UD and remains undefeated, but the Tijuana crowd wasn't having it 😳#MunguiaBallard pic.twitter.com/PyzLBsNjqC

The crowd boos the decision but it was the right call. Torres won the fight but he earned the victory. Escobedo walked through Torres' heavy shots, which caused a massive gash over his eye. Not did Escobedo absorb the punishment with blood streaming down his face, he fired back with a relentless assault to Torres' ribs. The punches were taking their effect on Torres as he kept dropping his left arm to his side.

But the comeback was too little, too late and Torres remains undefeated (14-0, 13 KOs). Definitely want to see Escobedo fight again though. A ton of grit and heart.

facebook twitter whatsapp
In the beginning of the ninth round, Torres' mouthpiece came out for the third time. That was one too many times for the referee as he deducts a point from Torres.

Diego Torres loses his mouthpiece for a third time and the referee deducts a point 🔻#MunguiaBallard pic.twitter.com/Y99LPESeab

facebook twitter whatsapp
Escobedo making things difficult for Torres in the sixth round. He's the one now landing first and putting Torres on his back foot.

Can Escobedo continue the momentum?

All Diego Torres halfway through

facebook twitter whatsapp
Torres is making mincemeat of Escobedo's face through five rounds. The volume and power punching from Torres is too much for Escobedo. Wouldn't be shocked if the fight is stopped in the next round or two.
facebook twitter whatsapp
Up next at Munguia is Diego Torres (13-0, 13 KOs) facing Jonathan Escobedo (8-2-1, 2 KOs) in super lightweight action.

Can Torres continue his torrid run?

Espinoza came out a man on a mission. He bum rushed Laurel into the corner and a shot sent Laurel to the canvas. Laurel attempted to come back with a couple of shots. But, he threw a left to the body and Espinoza countered with a check left hook on the temple to send Laurel to the canvas and got counted out.

Great way to start the show.