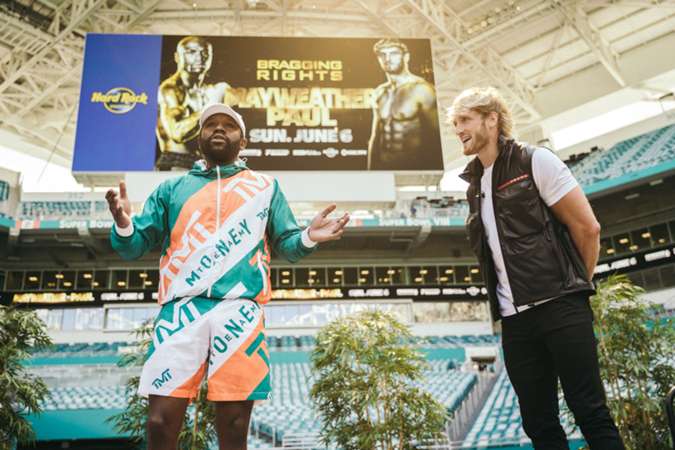 Mayweather's training partner says he has increased his training for the bout with Logan Paul in order to teach the brothers a lesson.

Mayweather faces Logan in an exhibition on June 6 in Miami, one which nobody expects to be anything but a win for the actual boxer. And Floyd claimed in a recent interview that he doesnt need to put together a gameplan or exert too much extra effort to do whatever he wants with the YouTuber.

However, Doughlin told Betway Insider that on the contrary, Mayweather has stepped up his training purely to make Logan pay for all the trash-talking — and to make Jake, 3-0 in his own boxing sideshow exploits, watch his brother suffer for the infamous 'gotcha hat' incident and taunts.

"I think Floyd thought taking his hat was disrespectful and it looks like it has lit a fire under him from what I saw at the gym," said Doughlin. "I was very impressed. I think that had to do with the Paul brothers p—ing him off.

"Floyd’s one of the greatest in the world - but I didn't think that he was going to train intensely for this. But now they’ve p—ed him off now, so he’s turning it up. What I saw today from Floyd was very impressive.

"I was blown away. I was kinda expecting him to do a cookie cutter workout, shadow box and spar someone really bad just to stay active. That’s what I was expecting.

"But I came into the gym at around midnight and the energy and atmosphere in the gym felt like a real Mayweather fight. Floyd looked great, man - he didn’t miss a beat.

"Still cocky, still having fun, still crafty - it was a real sight to see. Watching him get rounds of sparring, hitting the bag, on the pads - he had great energy. I learned a lot just watching that.

"Floyd was to be the best in the world and he retired. So while he’s not taking this fight with Logan Paul as seriously as a real fight against Errol Spence for example, he’s taking it as seriously as he needs to for what this fight is — which is for a kid who’s a little bit crazy and disrespectful, who does not understand the craft of boxing.

"Floyd’s going to teach him boxing’s an art. It does not matter if you’re bigger than me, or stronger than me because I have boxing skill. Floyd is one of the best technicians in the sport and I feel Floyd is taking that seriously.

"He has a need to show this kid boxing is about skills and not just a fight - it’s a science. 100 percent he’s going to make him pay."