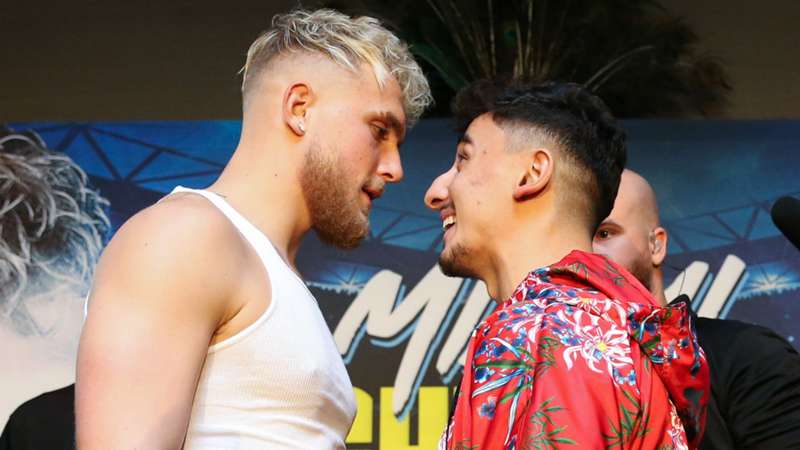 Jake Paul feels it's all on the line Jan. 30 against AnEsonGib.

If you were expecting Wednesday's press conference between social media stars Jake Paul and AnEsonGib to be a traditional boxing presser, think again.

There was a lot of trash talk about YouTube subscribers, followers on Facebook, Twitter and Instagram, and views on those various social media platforms. For a moment, though, Paul got emotional when he refused to answer a question about what would happen if he lost his Jan. 30 bout to Gib in Miami (live on DAZN), and admitted there is a lot on the line.

"It seems like I’m overlooking him because that’s the narrative we’ve built. At the end of the day, I have to defeat him first. Jan. 30 is what I'm focused on. But I know I’m going to win. You have nothing to lose. This is your biggest payday. This is your 15 seconds of fame. You’re seven-and-half seconds in. How is it so far? Is it good? You enjoying your 15 seconds of fame? Soak it in while you can.

"But here’s the thing: You have nothing to lose. I have everything to lose. I’m Jake Paul, the big, bad wolf. If you think you have a mental edge over me, you’re f—ing wrong, kid."

Paul and Gib were both on the undercard of the first fight between Paul's brother, Logan, and KSI. Jake Paul defeated KSI's brother, Deji, and Gib beat fellow YouTube personality, Jay Swingler. Paul admits he's looking past his foe at the end of the month and has his focus on KSI, so he can avenge his brother's loss.

"Gib's a doormat to me," Paul said. "He's merely something I'm wiping my shoes on, on the path to avenge my brother. My brother lost because of a two-point deduction. It was a controversial win for KSI. But KSI got the win — and all respect to him — but I'm a different fighter, and I have a different mentality. And after I beat Gib, KSI is going to get the smoke. KSI's already said he's down, so to me, this is where this is naturally all going. I'm going to be here again in a couple of months after this fool gets knocked out."