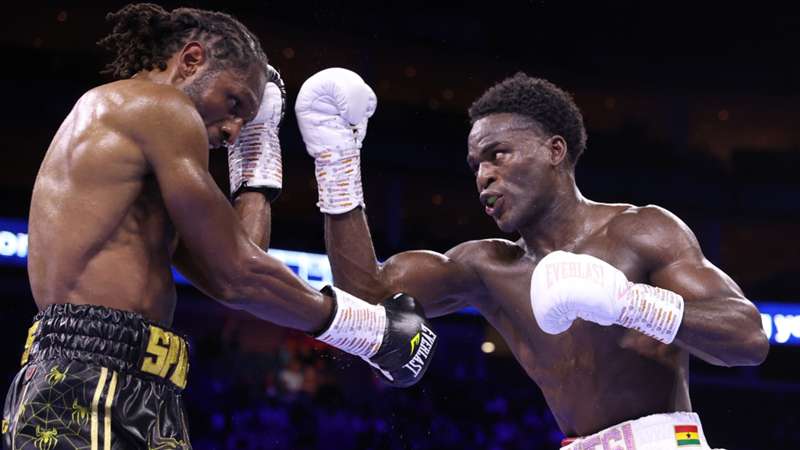 Is Joshua Buatsi closer to a title shot?

Joshua Buatsi and Craig Richards had a lot on the line Saturday when they squared off in a pivotal light-heavyweight clash from the O2 Arena in London.

The bout was a WBA title eliminator. With Richards out of the way, Buatsi (16-0, 13 KOs) made it clear that he's ready for a title shot against WBA (super) champion Dmitry Bivol.

"I want the world title shot next, Buatsi bluntly said in his post-fight interview.

It is unknown as to what Bivol is going to do next after upsetting Canelo Alvarez at the beginning of May. Alvarez has a rematch clause, but he hasn't declared what he'll do next.

Here's what happened between Joshua Buatsi and Craig Richards.

facebook twitter whatsapp
Left hook for Richards, who needs a lot more of those. A right by Buatsi. Right to the body from Buatsi. An uppercut from Richards and a right from Buatsi hurts Richards. Straight right from Richards, but Buatsi comes right back with an uppercut. An exchange of rights. An impressive six-punch combination from Buatsi to end the round. Richards needs a stoppage to win on my scorecard. (10-9 Buatsi, 107-102 Buatsi)

facebook twitter whatsapp
A battle of jabs in the first minute of the ninth. Two overhand rights from Richards. Buatsi fires off a right of his own. A great jab from Buatsi. A left hook from Richards. (10-9 Richards, 87-84 Buatsi)

facebook twitter whatsapp
Richards firing off a series of jabs which looked to have surprised Buatsi. A right hand from Buatsi. A low blow by Buatsi, and he's warned by the referee. Right hand and a left hook from Richards. A jab and two right hands from Buatsi. A right and a left hook makes Buatsi grab for dear life. Richards unloads a series of shots. Buatsi comes back. Richards fires off a combo of his own. Buatsi unloads two overhand rights that shook Richards, who stumbled to the corner. What a round. (10-9 Richards, 78-74 Buatsi)

facebook twitter whatsapp
Not much action this round. Both guys look to be resting up for the latter half of the fight. Buatsi controlled the round with the jab to win it on my card. (10-9 Buatsi, 69-64 Buatsi)

facebook twitter whatsapp
A right gets Richards to the ropes, but Buatsi can't do much with the advantage. An exchange of left hooks. Straight right connects for Buatsi. A barrage from Buatsi hurts Richards. Buatsi is taking the foot off the gas, allowing Richards to land a flush right. I don't like Buatsi's method of slowing down when he had Richards on the ropes. (10-9 Buatsi, 49-46 Buatsi)

facebook twitter whatsapp
A jab to begin the fourth for Buatsi. An exchange of body shots. Right uppercut snaps Buatsi's head back. Left hook stops Richards in his tracks. A series of hard lefts to the body from Buatsi. Richards isn't deterred as he lands a left hook. Hard right from Richards. Overhand right from Buatsi. And they slug it out to the end of the bell. Best action round of the fight so far. (10-9 Buatsi, 39-37 Buatsi)

facebook twitter whatsapp
An exchange of jabs to start the third. A hard right to the body from Buasti, but Richards comes back with a right. Double jab by Richards. Overhand right from Richards. Another hard body shot from Buatsi, whose making that a point of emphasis. A right stuns Richards, but Buatsi has no time to follow up. (10-9 Richards, 29-28 Buatsi)

facebook twitter whatsapp
Buatsi starts the second round like he ended the first as a stiff jab snaps Richards' head back. A right-hand lands for Buatsi. An exchange of jabs. A right to the body followed by a right upstairs from Buatsi. (10-9 Buatsi, 20-18 Buatsi)

facebook twitter whatsapp
It's time for the main event as Joshua Buatsi (15-0, 13 KOs) battles Craig Richards (17-2-1, 10 KOs). Huge test for Buatsi as two fights ago, Richards gave Dmitry Bivol all he could handle. Richards got into the ring, and Buatsi made a beeline to him on danced around a couple of times. Things are getting testy before the first bell has even sounded.

A dominant performance by Cameron, who showed why there are levels to the sport. It's time for a megafight for Cameron. She's one of the pound-for-pound top women's fighters in the world. However, she no longer seems interested in an undisputed title fight against Kali Reis and looks more towards Katie Taylor and four-belt welterweight champion Jessica McCaskill.

facebook twitter whatsapp
Through five, it's all Cameron. She's boxing perfectly. Setting everything up with a crisp jab which is stopping Bustos in her tracks. Bustos has landed few and far significant shots that would put Cameron in any danger.

facebook twitter whatsapp
In the co-main event of Buatsi vs. Richards is Chantelle Cameron (15-0, 8 KOs) defending her IBF/WBC super lightweight titles against Victoria Bustos (23-6). It should be nothing more than a busy body for Cameron while she waits for Kali Reis.

If you didn't like this fight, then this wasn't for you. A knockdown drag out from the opening bell to the final bell. Both guys left it all out there and gave it all they had.

Babic's style is an exciting one to watch and has become must-see. A fun fight that awoke the crowd.

facebook twitter whatsapp
Since the knockdown, Babic has gained control in the second and third rounds. His constant pressure and uppercuts down the middle have slowed Balski down considerably. Both guys were exhausted walking back to their respective corners.

Down goes Babic 20 seconds in

facebook twitter whatsapp
Babic came roaring in and started slinging away. They were trading shots when a Balski left hook sent Babic to the canvas. I wasn't expecting that one. Could we have an upset in London?

Babic is down in the FIRST round 😲 pic.twitter.com/oJufjnAlGR