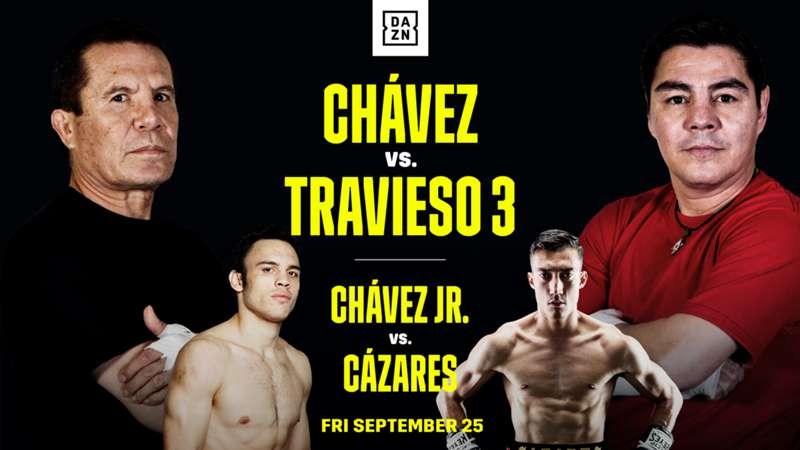 Click here to watch Chavez vs. Arce 3 on DAZN

Father and son will set foot in the ring on the same fight night as former middleweight champion Julio César Chávez Jr. faces off with Mario Cázares in the main event while his legendary father, Julio César Chávez, battles Jorge Arce for the third time in a four-round exhibition on Sept. 25 from the Grand Hotel in Tijuana, Mexico, live on DAZN USA.

Chávez Jr. (51-4-1, 33 KOs) last fought in December and lost to Daniel Jacobs after refusing to come out of his corner for the sixth round. Currently, he's under an indefinite suspension from the Nevada State Athletic Commission for refusing to take a drug test before the bout with Jacobs. At the time, Chávez was able to get a temporary injunction to allow the fight to go on, where it took place in Arizona. But he returns to the ring on Sept. 25 against the undefeated Mario Cázares in Mexico.

Cázares is best known as the last guy to get a victory over current middleweight and super middleweight champion Canelo Álvarez in the amateur ranks back in 2004. The 30-year-old has faced low-quality opponents in his five-year career, with Chávez being the most notable name on his resume.

The 58-year-old Chávez Sr. and 41-year-old Arce meet for the third time on the exhibition circuit.

During his professional career, Chávez was a multiple-time world champion and won titles in three different weight classes. Chavez compiled a record of 107-6-2 with 85 KOs. The Mexican legend and all-time great started his career by going unbeaten in his first 90 fights (89-0-1). He fought the likes of Pernell Whittaker, Frankie Randall (twice), Meldrick Taylor (twice), and Oscar De La Hoya (twice) before retiring in September 2005.

Like Chávez, Arce also was a multiple-time world champion, but he captured belts in four different weight classes. His most notable foes were Vic Darchinyan, Nonito Donaire, and the last bout of his career against Jhonny González in October 2014.

Chávez vs. Arce 3, Chávez vs. Cázares: How to live stream on DAZN

The Chávez vs. Arce 3 and Chávez vs. Cázares fights will be available on DAZN in the United States.

DAZN isn't a traditional TV channel but is a live sports streaming service.

A subcription to DAZN includes not only the Chávez vs. Arce 3 and Chávez vs. Cázares card but other fight sports events and original programming included in DAZN's multi-sport offering.

Current subcribers can watch Chávez vs. Arce 3 and Chávez vs. Cázares as part of their plan.

The Chávez vs. Arce 3 and Chávez vs. Cázares fights will take place at the Grand Hotel in Tijuana, Mexico. Fans won't be present and social distancing of personnel will be in effect due to the ongoing coronavirus pandemic.

Chávez vs. Arce 3 and Chávez vs. Cázares fight card