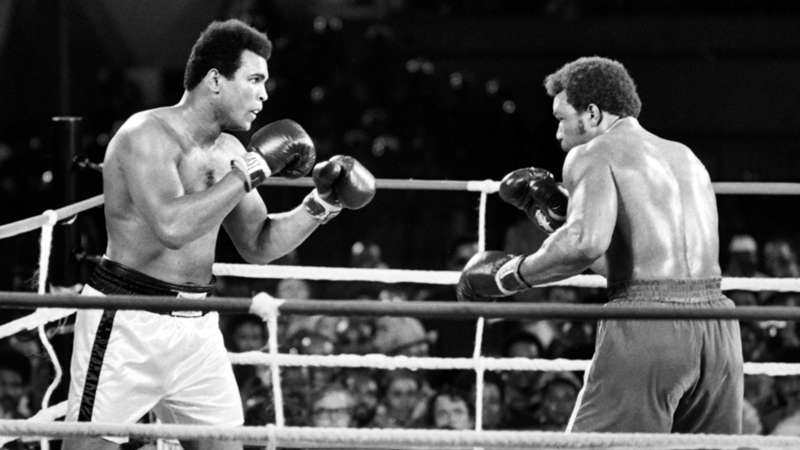 With the Andy Ruiz Jr.-Anthony Joshua rematch announced for Dec. 7 in Saudi Arabia, let's run down some other world locations for notable heavyweight fights.

When Matchroom Boxing announced that the Andy Ruiz Jr.-Anthony Joshua rematch was set for Dec. 7 in Diriyah, Saudi Arabia, the fight promotion's poster read "Clash On The Dunes," and it was evident that Eddie Hearn was going to use the bout's location as part of its massive buildup.

That triggered flashbacks to Muhammad Ali vs. George Foreman in "The Rumble In The Jungle" in Zaire and the Ali-Joe Frazier rubber match known as the "Thrilla in Manila."

And that got us thinking about some of the locations across the world that have played host to some of boxing's most notable heavyweight bouts.

The Heavyweight Championship has been contested all over the world 🌎#RuizJoshua2 pic.twitter.com/1Iivm3eYKj

Here are some of the classics — where will Ruiz-Joshua in Saudi Arabia rank when the rematch is finished?

Ali vs. Frazier in "Fight of the Century"

There was only one place fitting for the "Fight of the Century" — at New York City's Madison Square Garden, known as "The World's Most Famous Arena." There, the world witnessed "Smokin' Joe" put his all into a left hook that dropped Ali with a thud in the 15th round en route to winning the decision and handing "The Greatest" his first pro loss.

Ali vs. Foreman in "The Rumble In The Jungle"

Foreman entered the fight undefeated and feared as one of the hardest punchers in boxing. He left, though, as a defeated man. Ali used the painful but effective "Rope-a-dope" strategy, as he lay on the ropes and absorbed punishment until Foreman fatigued and "The Greatest" pounced, peppering him toward a rousing eighth-round KO to the crowd's delight in Zaire.

Ali vs. Frazier in "Thrilla in Manila"

The third and final clash between the rivals wasn't their best, but both fighters showed plenty of heart. The bout was stopped after the 14th round when Frazier's eyes were swollen shut and his trainer wisely stopped him from answering the bell. That gave Ali the TKO victory in the sweltering Philippines heat.

Tyson vs. Douglas sure didn't have the feel of anything special entering the fight with "Buster" as a massive 42-to-1 underdog. But Douglas made sure to change that narrative dramatically with a jaw-dropping 10th-round KO of Tyson to hand "Iron Mike" his first loss. Douglas became the new unified world heavyweight champion, cementing the Tokyo venue as the scene of the greatest upset in boxing history.

Foreman vs. Frazier in "The Sunshine Showdown"

The still-undefeated "Smokin' Joe" got caught with a rude awakening in the form of Foreman, who blasted the unified world heavyweight champion with a vicious second-round TKO to take the crown. Frazier's first loss came in devastating fashion under the sun before a raucous crowd in Jamaica's capital.

Like Tyson vs. Douglas, the wide public opinion was that Lewis wouldn't have much trouble defeating Rahman and retaining his heavyweight straps. Instead, the 15-to-1 underdog Rahman dropped Lewis with a thunderous right hand for a shocking fifth-round KO to become unified champion of the world.