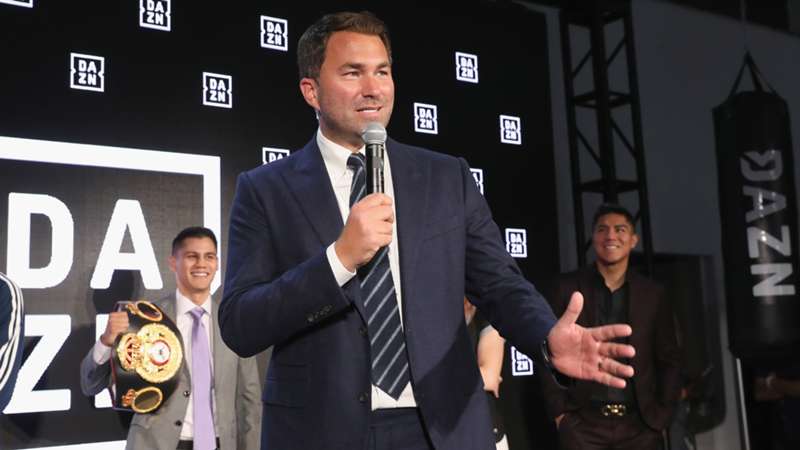 Exclusive: Last week, the game changed. Matchroom Boxing chief Eddie Hearn explains in detail why they chose to move from Sky, what this means for fans and what the future holds.

June 3, 2021 was the day it became official: Matchroom Boxing is coming to the UK and Ireland from July, starting with the second Fight Camp series which commences on the 31st.

It’s easy to assume that Matchroom chairman Eddie Hearn, one of if not the most open and engaging promoter in boxing, was giddy with anticipation to finally discuss the game-changing five-year deal in public.

That assumption was proven correct by the man himself, in an exclusive interview with DAZN shortly after the announcement.

“You know me, I’ve got the biggest mouth in boxing — arguably in all of sports!” he quipped. “So for me to not be able to say anything until June 3rd was very difficult.

“When you do a deal like that, you want the world to know, as soon as possible. But it was good at the same time, because it gave us the opportunity to work behind closed doors to start building the infrastructure, the schedule and do a lot of work before the announcement. So, we’re in a really good place to start moving forward with Fight Camp coming up at the end of July, and the schedule towards the end of the year.

“It’s not like we’re jumping to a new partner because of our relationship with DAZN in the rest of the world. The move feels very natural, but at the same time very exciting as well.”

The end of a long and successful exclusive deal with Sky Sports in the UK and Ireland — the broadcaster has been the home of Matchroom for British fight fans since 2012, with the upcoming Lewis Ritson vs. Jeremias Ponce card marking the end of an era on home soil — surprised many, even though Hearn and DAZN already enjoy a close relationship in many other global markets.

Hearn told me that no one solitary factor led to the decision; the time was simply right to move forward with his grand plan for ‘the sweet science’.

“It’s a mixture of a lot of things, really,” explained Hearn. “First, it’s the vision that DAZN has for boxing not just in the UK but globally.

“With the launch of DAZN in the UK recently, as part of the global platform, I’ve found myself wearing two different hats. One week I’ll be promoting Anthony Joshua on Sky, and the next week I’ll be heading out for Canelo Alvarez on DAZN UK, and that doesn’t always sit well with people.

“I saw this as the opportunity to wear just the one hat. Now, wherever I am in the world and wherever I am promoting a show, this is the only place you can watch it, worldwide.

“There are many different areas of why we made the decision to move. One is the investment, being able to stage major fights and give the fighters opportunities to make great money. But also the progression of Matchroom Media, our content arm that will work in close collaboration with DAZN towards the production of events.

“And there’s never been a global platform for boxing. You’d always sell your rights internationally to different broadcasters. So when DAZN came up with this, straight away I thought it was a fantastic idea.

“It can normally be quite hard naming all the broadcasters that carry your show. There could be 40, 50 different broadcasters. Then, and this is quite common for a boxing promoter, you create the event, you create the narrative, you create the hype and then you get to fight night and the big moment, and you lose control of how that’s delivered.

“That’s just how it works with a host broadcaster, but this deal is very different. We will be delivering the live broadcasts and all the action in our own narrative and style.

“And now there will be a global synergy between Matchroom and DAZN, which is very similar in terms of the mindset for a global expansion and that’s very important for the growth of boxing worldwide.

“This enables us to open up another key market with DAZN. Already we’re in the US, we’re in Italy, Spain, now the UK and that will grow significantly over the months and years in various markets based on the data we see on the global platform.

“I was particularly impressed with the speed at which they acquired subscribers and the ease fans made in moving towards watching content and streaming via the platform.

“That gave us a lot of momentum going forward, and then with Ryan Garcia vs. Luke Campbell and Canelo Alvarez vs. Billy Joe Saunders, that’s when you saw the numbers really begin to rise — and that’s when I saw that this really has an outstanding future.”