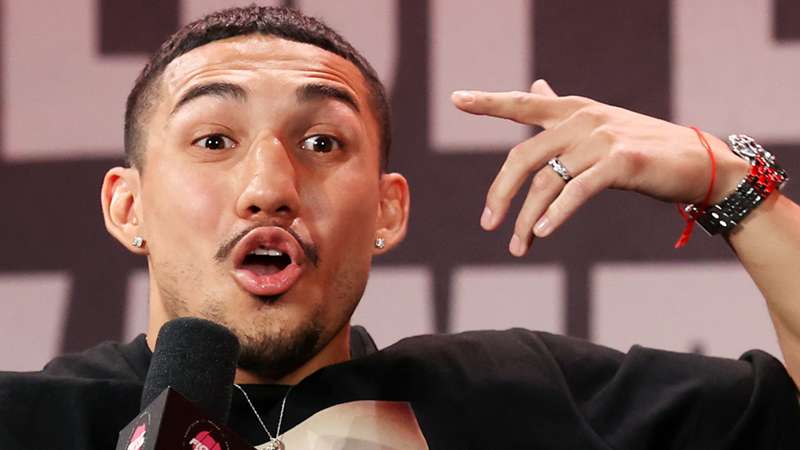 Exclusive: The unified lightweight champion tells DAZN News about how he wants his hostile Takeover to continue after facing George Kambosos on Saturday night. That includes a Haney fight and jump to 140 pounds and beyond.

The news of Teofimo Lopez’s amended deal with Top Rank broke Saturday, reportedly raising his minimum purses from his previous amount of $1.25 million.

That came after he’s set on receiving approximately $3.9 million for his unified lightweight title defense against George Kambosos on Saturday, June 19 via pay-per-view on the streaming service Triller, as reported by ESPN. Headlining that card should further build Lopez’s profile, as the event is also set to feature artists such as Meek Mill, Farruko and Myke Towers.

All being said, any thought of “The Takeover” being complete following Lopez’s dominant unanimous decision over Vasiliy Lomachenko in October was premature. If anything, “The Takeover” is just beginning. Consider this its evolving process.

“That's one chapter that we took over and now we're just constantly pushing for more,” Lopez tells DAZN News over a Zoom conference call last week, referencing his manhandling of Loma and how it marked just the beginning of his upward trajectory in the sweet science.

“So, there's so many takeovers in this position that it's really good to know that in this place that I'm in, there's so much more than I can do,” he says with excitement in his words and doom in his eyes toward any future opponents. “The fact that I'm only 23-years-young, I'm using my youth and age right now to take advantage of it.”

The business side of things being buttoned up spells that Lopez can shift his full focus to what he does best — fighting. After outboxing Lomachenko, who was believed by many to be the pound-for-pound best, Lopez is promising knockout devastation for Kambosos. Perhaps then, the Brooklyn native can look toward undisputed glory at lightweight.

Lopez wants to make an example out of Devin Haney

Lopez already owns the IBF, WBA and WBO lightweight titles in addition to being the WBC franchise champion as well. The only missing piece to what would be an undisputed reign is the WBC title in the clutches of Devin Haney. Lopez, though, thinks the latter should be accompanied with an asterisk.

“I don't think it's a true factor that he earned it in the ring,” Lopez tells DAZN News about Haney being recognized as WBC champion. “It's something that he got elevated and went up one and got his regular belt via email. That's why I call him the email champion.”

Lopez is referring to Haney being elevated from WBC interim lightweight champion to the official WBC titleholder following email correspondence with the sanctioning body.

For that very reason, Lopez wants to put a beating on Haney after Saturday night.

“My whole thing, my goal is I gotta focus on June 19th against Kambosos,” Lopez tackles first. “We get the job done and then we can make that fight (against Haney) happen. We can actually get the ball rolling on that. My whole goal is to really — not just beat him convincingly — but to knock his head off.”

Doing so would punctuate Lopez as the official undisputed ruler at lightweight, although it’s a distinction that he already claims to spurn Haney.

To 140 pounds, welterweight and beyond?

During the April press conference for the Kambosos fight, Lopez didn’t mince words in saying: “My goal is to become the first male to become two-time undisputed champion back-to-back.”

If he’s able to walk through Kambosos, as largely expected, and defeat Haney, that would mean Lopez looking forward to a tilt with newly-crowned junior welterweight undisputed king Josh Taylor.

The very thought of a Lopez-Taylor clash is mouthwatering. But Lopez doesn’t see the division being deep past Taylor and one other former champion. And the same can be said for lightweight if you ask the confident champ.

“It seems like we have a stacked 135-pound division, but we don't. In reality, we really don't,” boasts Lopez. “At 140, there's not really anybody but two guys I can think of are Jose Ramirez and Josh Taylor.”

Of course, welterweight, which touts champions such as Terence Crawford and Errol Spence Jr. is a different story.

“At 147, that's a stacked weight class,” Lopez tacks on. “There's so many options there. We have to wait and see. I really can't quite put my finger on it right now.

“I listen to my body,” Lopez additionally offers. “Eventually, we'll go to 140 and then we'll go to 147, then go to 154 and maybe 160. There's so many weight classes that I can probably achieve in a short period of time.

“I'm maturing more. I'm only 23, I have about two more years of that man strength left in me until it's completed. I think we'll just wait it out like that.”

All the smoke — whoever, whenever

One fight at a time adhering to boxing politics and protocol, but Lopez wants all the profile-raising, big bouts both soon and down the road.

“We're not picking and choosing,” he says. “We're just trying to make these big fights happen for the people, so they could tune in and watch. The more, the merrier.

“(Gervonta) ‘Tank’ Davis, Ryan Garcia, whenever he comes back from his (mental health) issues that he's dealing with, and so on and so forth. It's not about us fighting them, it's about them wanting to fight me.”