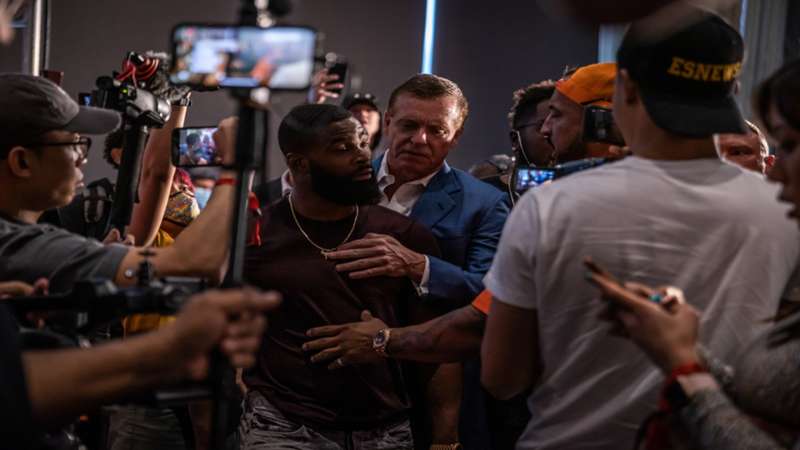 The former UFC welterweight champion is very protective of his mother.

CLEVELAND — Heading into their matchup on Sunday evening, Tyron Woodley and Jake Paul have already made it abundantly clear they don't like each other. You can hear and see the disdain when the other is brought up.

For most of their press conference on Thursday afternoon, Woodley and Paul were cordial towards each other. The conversation got a bit chippy near the end, but nothing out of the ordinary. That didn't last long.

Immediately after their second faceoff, pro boxer and member of Paul's team J'Leon Love got into a verbal altercation with Woodley's mother, Deborah. Woodley's sister got involved and went up to Love. The former UFC welterweight made a beeline towards the situation as both camps started yelling profanities, shoving and pushing each other. Security and police were able to deescalate the confrontation and were able to get the Woodley team out of the ballroom.

"One thing I don't do is disrespect," Woodley said to members of the media, which included DAZN News minutes after the skirmish. "And when disrespect comes to my mother, it's a whole issue. F— this money, f—this bag, f— the pay-per-view, f— the fight. When it comes to that, it will not be tolerated.

Paul talked trash to Woodley moments after the fracas. Woodley was visibly upset and demanded an apology from Love for the incident.

Some people feel what happened on Thursday was nothing more than a publicity stunt to drum up more interest in the fight.

"That's not an antic," Tyron Woodley said of the situation. "That's disrespect. That's an outlier. He could have took my hat, took my f—ing glasses. Made a joke. He could have even shoved me. He would have got slapped, but still. He crossed the line."