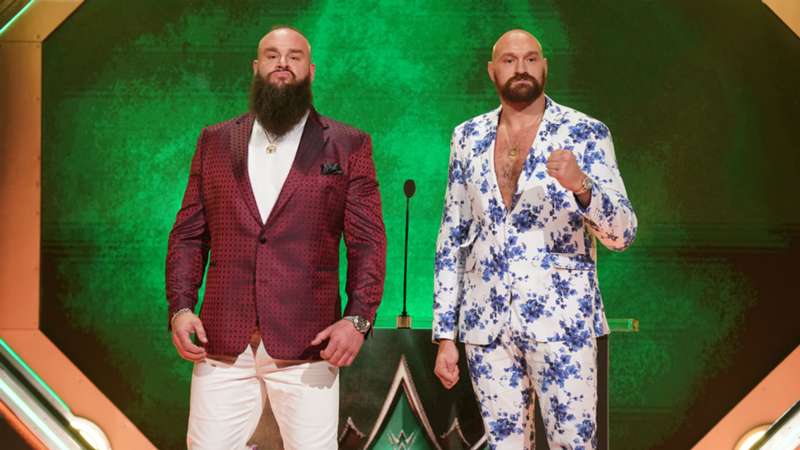 Tyson Fury will next set foot in the ring against WWE Superstar Braun Strowman. Although the match is strictly entertainment, there is concern that the cut suffered against Otto Wallin could reopen and put Fury's February 2020 rematch with Deontay Wilder in jeopardy.

LAS VEGAS — Lineal heavyweight champion Tyson Fury may have a date set for a return bout with Deontay Wilder on Feb. 22, 2020, but that doesn’t mean the showman will be sitting idle in the interim. Instead of waiting to see if Wilder will take care of business against Luis Ortiz on Nov. 23, the undefeated Gypsy King will take his talents to the WWE, where he faces the 6-foot-8-inch “Monster Among Men” known as Braun Strowman at the King Fahd International Stadium in Riyadh, Saudi Arabia on Oct. 31.

Although the finishes are predetermined, pro wrestling remains quite the physical brand of entertainment. And with Fury still healing from a serious gash over his right eye from his Sept. 14 bout with Otto Wallin, there is a legitimate concern that any incident could reopen that cut and jeopardize the highly anticipated heavyweight title tilt with Wilder.

“Apparently my promoter, my trainer, my manager, my family and everybody at home has been saying ‘Don’t take this fight because that guy is going to rip that cut open!’” Fury told DAZN News in an interview after the match with Strowman was announced at a press conference in Las Vegas. “But I’m quite quick and it’s really up to me to not allow him to rip that cut open.

“It’s worrying moments for the Wilder rematch, but I’m living in the moment.”

.@Tyson_Fury chats with SN's @AndreasHale about his deal with the WWE, the Wilder rematch and more. 👇 pic.twitter.com/WuZgI61T0q

Ever the showman, Fury in the WWE has always seemed like a natural fit. And it is far from the first time that a boxer has participated in a match on WWE television. There are a few examples including when Floyd Mayweather Jr. faced The Big Show at WrestleMania 24 back in 2008, Mike Tyson was the special enforcer in the world heavyweight title match between “Stone Cold” Steve Austin and Shawn Michaels at WrestleMania 14 in 1998 and when James “Buster” Douglas served as the referee for a match between Hulk Hogan and “Macho Man” Randy Savage in 1990.

But Fury’s natural charisma, size and status as an undefeated champion was the perfect storm of qualities that made his WWE debut not an “if” but “when.” And Fury reveals that the deal was in the works for several months for him to appear in the WWE but was finalized shortly after the Wallin fight.

“This deal came together just recently,” Fury said. “My people have been working behind the scene on it for the past few months but my involvement came over the past couple of weeks.”

Interestingly enough, Fury was never worried about the cut – which required 47 stitches to close up – or how it could be present an issue for his match. Instead, the 31-year-old was focused on getting into the squared circle during a time when he’s not actively training for a fight and has a little extra time on his hands.

“I always wanted to get involved with WWE for a number of years but because of my boxing career, I wasn’t able to," he said. "The opportunity arose recently, and I took a hold of it with both hands.”

Strowman vs. Fury will take place at WWE Crown Jewel on October 31 live on the WWE Network.