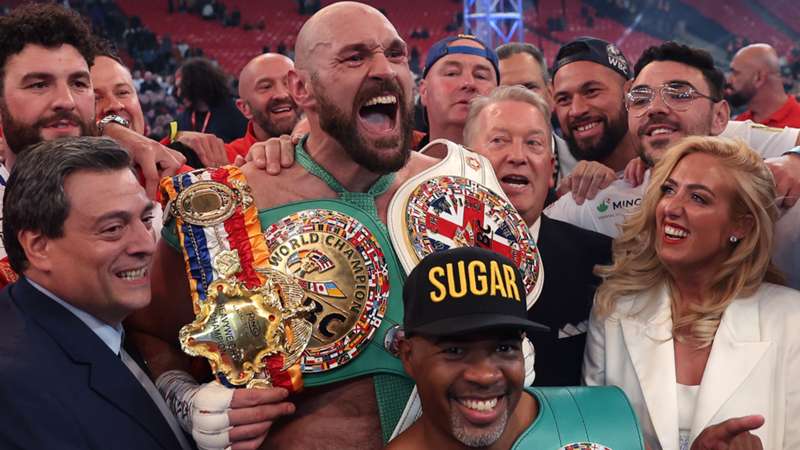 Tyson Fury and Derek Chisora are both familiar with each other. The popular heavyweights meet for a third time this Saturday night at the impressive Tottenham Hotspur Stadium with Fury’s WBC title on the line, and Chisora has it all to do.

A rivalry stretching well over a decade, Fury has always had the upper hand up to now. Here, DAZN looks back at the first two fights and it’ll provide Fury fans with a ton of confidence.

Both unbeaten and both dreaming of future world title glory, Tyson Fury and Derek Chisora first came to blows in the summer of 2011.

Each man had navigated their way through their respective heavyweight apprenticeships, and with the British and Commonwealth titles at stake, this was by far the biggest fight of their careers up to this point.

Headlining a huge Channel 5 show with a massive audience guaranteed, the night belonged to Fury as he answered multiple questions about the potential he held.

The Morecambe man’s superior skillset was evident early on and after 12 rounds, the judges confirmed what everybody already knew.

Fury was the winner, and this victory was the springboard for him to push on and enhance his legacy further.

For Chisora, the big fights weren’t over. Within a year of the Fury loss, ‘DelBoy’ was in action no fewer than four times as his profile soared in major fights with Vitali Klitschko and David Haye.

Fury may have taken his undefeated record, but Chisora was still very much a big attraction.

Despite the first fight providing enough clarity on who was the better fighter, Fury and Chisora would meet again at the backend of 2014.

European honours were up for grabs this time on a huge show that also featured Chris Eubank Jr stepping up in class to take on his bitter rival, Billy Joe Saunders.

Like the first fight, Fury started impressively, this time from a southpaw stance. Chisora, famed for his aggression and resilience had no answer to Fury’s approach, and as each round passed, the task became even harder for the Finchley man.

After ten completed rounds, Chisora's corner provided some much-needed compassion as they withdrew their man to allow Fury to go 2-0 in the series.

One year later, Fury etched his name into British boxing history as he travelled to Germany to upset Wladimir Klitschko and capture the lineal heavyweight title.

Chisora took a patient approach to his rebuild, but it wouldn’t be long before he continued his incredible story with memorable battles with numerous leading contenders.