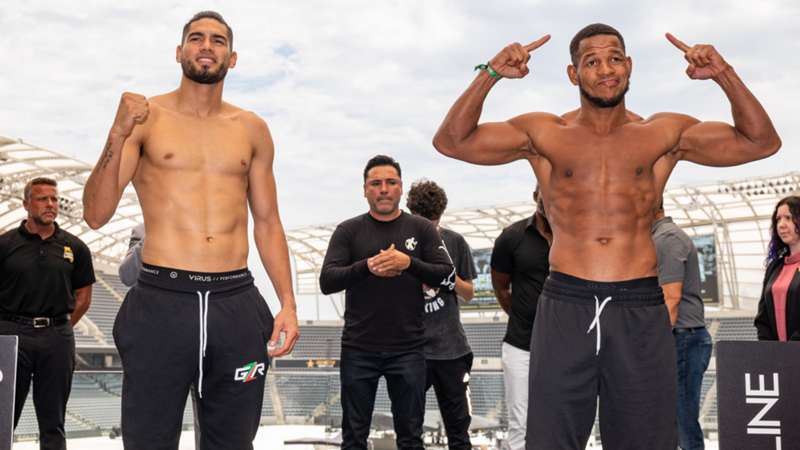 Getty Images
Watch Ramirez vs. Barrera only on DAZN

Gilberto Ramirez looks to avoid a banana skin on his quest for light-heavyweight glory.

The undefeated former super-middleweight world champion Gilberto Ramirez makes his third appearance at light-heavyweight tonight against Sullivan Barrera, and though his step up has gone very well so far Ramirez must be at his best to avoid a major career derailment against the determined Cuban.

Barrera turns 40 early next year but is unfazed by the belief that he is being served up on a platter to a future 175lbs titleholder, as evidenced by his recent exclusive interview with DAZN Mexico.

"It's a fight of great importance, for me and for Gilberto, because I think the winner of this fight opens the way to a world title fight," Barrera told Erika Montoya (translated into English from the original story).

"(Ramírez) is a world champion, a very good boxer, with a good style, and I think it will be a very interesting fight for the boxing fans in general.

"All boxers have the right to speak, to say. As I said before I respect him, he has a lot of talent, but he knows the name of the biggest fighter, with the best experience and the best record that he is going to face is Sullivan Barrera.

"I think they're betting on the fact that I'm 39 years old and Zurdo Ramirez is 30 years old, a guy nine years younger, a talented fighter too, of course. They're not betting on my experience, on what Sullivan has done, the road I've travelled. I always say the ring has the last word."

Here is everything you need to know about Gilberto Ramirez vs. Sullivan Barrera.

The Gilberto Ramirez vs. Sullivan Barrera fight card takes place on Friday, July 9 at 9 p.m. ET. Ramirez and Barrera are expected to make their ring walks at approximately ​11:30 p.m. ET, although that depends on the length of the earlier bouts.

Ramirez and Barrera will have their light heavyweight clash on DAZN  worldwide in over 200 countries and territories.

Where is the Ramirez vs. Barrera fight?

The event will take place at the Banc of California Stadium in Los Angeles.