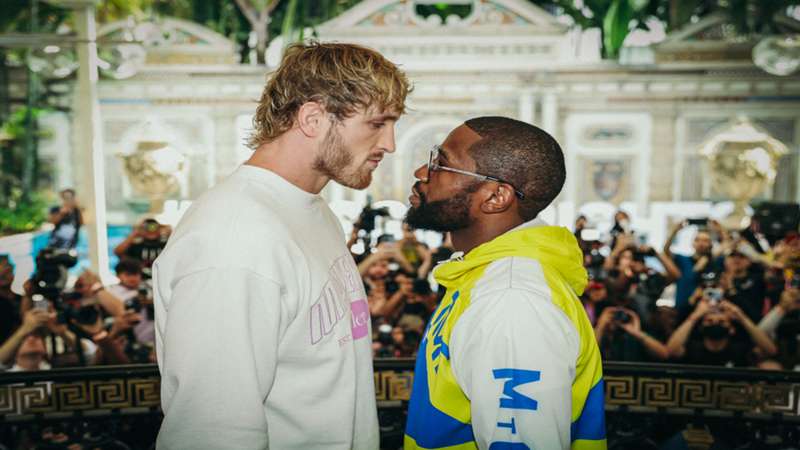 The former pound-for-pound king returns to the ring.

Floyd Mayweather Jr. steps throught the ropes once again as he takes on YouTube personality Logan Paul in an eight-round exhibition bout on Sunday from Hard Rock Stadium in Miami Gardens, Fla.

At the introductory press conference back in May, the 2020 International Boxing Hall of Famer and the social media personality were having fun with each other. Things turned ugly in a hurry when Paul's younger brother, Jake, got into a heated confrontation with the boxing great in the bowels of Sunday's contest.

Jake took Mayweather's hat, and security intervened quickly to try and separate them, which upset all parties involved and led to Mayweather wanting to get a piece of Logan.

Mayweather (50-0, 27 KOs) ended his legendary career with a 10th-round stoppage of UFC star Conor McGregor in August 2017 to retire undefeated. The 44-year-old competed in one exhibition bout when he went to Japan and violently knocked out kickboxer Tenshin Nasukawa in the first round on New Year's Eve in 2018.

Paul (0-1) returns to the sweet science for the first time since losing via split-decision to fellow social media personality KSI in November. Many are doubting Paul's chance to succeed. Who doesn't have that mindset? The 26-year-old from Ohio.

When is Floyd Mayweather Jr. vs. Logan Paul?

Mayweather vs. Paul takes place on Sunday, June 6. Pay-per-view coverage starts at 8 p.m. ET, with Mayweather and Paul expected to enter the ring at around 10 p.m. ET, but depends on the length of the previous main card bouts.

The Mayweather vs. Paul pay-per-view can be purchased for $49.99 through your cable or satelitte provider. You can watch the event online at Showtime.com and Fanmio.com.

Where is Floyd Mayweather vs. Logan Paul taking place?

Floyd Mayweather vs. Logan Paul takes place at  Hard Rock Stadium in Miami Gardens, Fla. It will be the first time Mayweather and Paul compete at the venue.