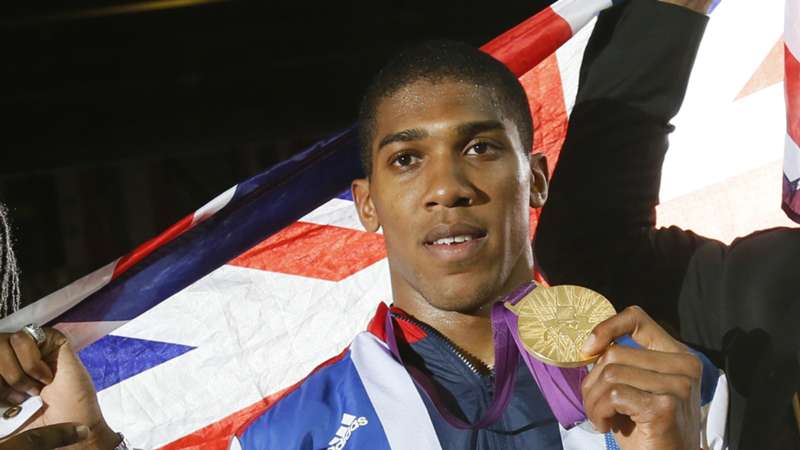 Everyone from Anthony Joshua to Oscar De La Hoya and "The Greatest" Muhammad Ali has an Olympic moment of revelry. DAZN News takes a look back at some of those incredible medal-winning feats.

Several boxing legends punctuated their amateur careers with a medal win on the grandest of international stages — the Olympics.

At 19-years-old, "The Golden Boy" emotionally dedicated his 1992 Olympic gold medal win to his late mother, Cecilia. He'd use that victory over German boxer Marco Rudolph in the final as a springboard for a pro career that started in November of that same year and resulted in the East Los Angeles native becoming a six-division world champion.

"The Real Deal" went on to become an undisputed cruiserweight and heavyweight champion in the three-belt era and the only four-time world heavyweight titleholder in boxing history. But not before he was robbed of a probable gold medal during the 1984 Olympic Games, when a referee inexplicably called for a break while he was in the process of launching a left hook to New Zealand's Kevin Barry's head in the second round of their semifinal light heavyweight match. Barry wasn't able to continue and what should have been a Holyfield win was declared a disqualification, as the dejected future Hall of Famer had to settle for a bronze in the Los Angeles Games.

While Holyfield's finish at the Olympics was controversial and reeked of a robbery, Jones' treatment in Seoul was a downright mugging that left a stench and stain on Olympic boxing. Jones, then 19, had beat Park Si-Hun, outlanding him in punches 86 to 32 over three rounds. Yet, when it was time for judges to score the fight, they inexplicably had Jones losing, awarding the South Korean fighter with the gold medal, while Jones was relegated to a painful silver. Jones memorably covered his face with a towel and walked out of the ring stunned. He'd become a pro less than a year later and go on to become a four-division world champion, including reigns at middleweight, super middleweight, light heavyweight and heavyweight.

Although they never fought as professionals, Lewis did execute a second-round stoppage against Riddick Bowe to win the super heavyweight gold medal representing Canda at Seoul. Despite that rematch never happening on the pro scene, Lewis became a three-time world heavyweight champ, defeating the likes of Evander Holyfield, Mike Tyson and Vitali Klitschko over the course of his Hall of Fame career.

The U.S. 1984 Olympic boxing team was stacked, touting nine gold medalists, including Whitaker, Mark Breland and Tyrell Biggs. It could have been 10 if Evander Holyfield wasn't robbed. Anyhow, Whitaker showed his boxing brilliance to come by soundly defeating Puerto Rican boxer Luis Ortiz to claim the gold at lightweight. That would propel a four-division world championship pro career, including indelible fights with Julio Cesar Chavez and Oscar De La Hoya — not to mention, a reverence from fellow boxers that continues today well past his untimely death in 2019.

A pristine 50-0 record as a professional over the course of a four-division world championship run, Mayweather certainly stamped his case for calling himself "The Best Ever." However, he had to learn to taste stinging defeat on the Olympic stage first. Although it was very reminiscient of Roy Jones Jr.'s treatment in Seoul eight years prior, Mayweather dropped a controversial decision to Bulgarian boxer Serafim Todorov to grab the bronze medal in a bout that he seemingly did more than enough to win. Of course, Mayweather made up for it by never tasting defeat again.

A broken thumb wouldn't stop "Smokin' Joe" from snatching gold at the Tokyo Games in 1964. The grandest of international stages had Frazier flashing the same left hook that he'd detonate on Muhammad Ali in the "Fight of the Century," defeating "The Greatest" back in March 1971 in a classic bout that just enjoyed its 50th anniversary, permanently etched into boxing fans' minds and hearts forever.

Well before "Big George" became one of the most intimidating, feared punchers in heavyweight boxing history, he was a gold medalist in Mexico City, where he bludgeoned Russian boxer Jonas Čepulis to a second-round stoppage with those weapons he calls hands. That same power never left — the proof being a 10th-round KO of 26-year-old Michael Moorer in November 1994 to become a two-time heavyweight champion and oldest heavyweight titleholder of all time at 45-years-old.

How sweet it was for young AJ to win the gold on his home soil in London. However, it wasn't easy.  Joshua had to outpoint battle-tested Cuban Erislandy Savón in the opening draw, before having to dig back to edge Italian Roberto Cammarelle in the final. That early mettle would reassert itself as a pro, where AJ is already a two-time unified world heavyweight champion at 31-years-old, looking to be grab undisputed glory later this year.

Shields doubled up on gold medals, too, making her the first American boxer — female or male — to win gold in two straight Olympic Games. The herstory continues, as Shields produced a unanimous decision over Marie-Eve Dicaire in March 2021 to become the first boxer ever — female or male — to be crowned undisputed world champion in two weight classes simultaneously during the four-belt era. Later this year, the self-proclaimed GWOAT (Greatest Woman of All Time) will attempt to become the first combat sports athlete to hold a world boxing title and mixed martial arts championship at the same time.

Ali lighting the torch to launch the 1996 Olympic Games became synonymous with "The Greatest" when it comes to his iconic Olympic moments. However, you'd have to date back to 36 years prior, where Ali, then Cassius Clay, delivered a gold medal as a light heavyweight in the 1960 Summer Games in Rome as his introduction to the grandest international amateur stage. He'd turn professional in October of that same year, going on to become a three-time heavyweight champion and arguably the most beloved boxer and global sports icon of his generation and beyond.