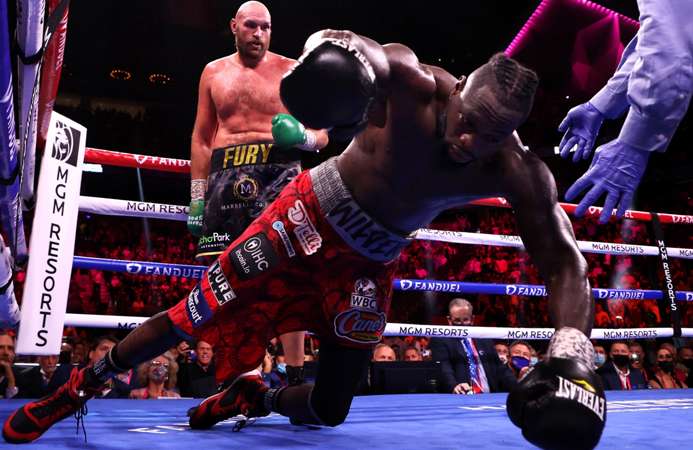 Debates about the best weight class in boxing are nothing new. DAZN provides a rundown of which divisions are currently the ones to watch.

One of boxing's most persistent debates outside of those surrounding individual boxers and specific championships is that of the various weight classes fighters compete at.

Given the weight restrictions at a championship level, the sport finds itself divided into groups of competitors and on any given day, one particular class can stand out above all others as the hottest scene for fight fans to keep tabs on.

So with that in mind, DAZN will be ranking the top 10 classes each month in their official Divisional Power Rankings.

Here are some of the criteria considered for this list:

So, here we go with the latest rankings!

In the space of two memorable weeks, the heavyweight division has a totally different look to it thanks to Oleksandr Usyk's dominat win over Anthony Joshua in September. The following month, Tyson Fury and Deontay Wilder concluded their rivalry with a stunning encounter where both men's stock went up despite Fury claiming the win. The heavyweight division is alive and well, and it has the potential to get even better in 2022.

With the talent available to create a potential golden era for boxing, lightweight takes top place as boxing’s best division. Teofimo Lopez, Vasiliy Lomachenko, Devin Haney, Ryan Garcia, and Gervonta Davis are all world class talents and if those fighters can keep each other busy over the next few years then boxing fans are in for a real treat.

Dominated by the Terence Crawford/Errol Spence rivalry, welterweight should be more than just a two man show. Shawn Porter is a match for all, Yordenis Ugas has arrived following his win over Manny Pacquiao, and Jaron Ennis and Vergil Ortiz Jr are ready to test themselves at the highest level. 147lbs has history on its side but its future also looks very promising.

Naoya Inoue may be the dominant force at bantamweight but there’s a deep list of contenders ready to take on the Japanese monster. Filipino pair, Nonito Donire and John Riel Casimero, will settle their rivalry in the near future, and their fellow countryman, Raymart Gaballo is also climbing the rankings. Guillermo Rigondeaux may feel like he has a point to prove and there’s Gary Antonio Russell threatening to make an impact.

154lbs might not have the marquee names but the depth in the division means that nobody in the top spots is safe. Jermell Charlo and Brian Castano fought to a draw earlier this year when trying to find out the dominant fighter, but there’s a lot of fighters underneath them confident of grabbing top spot including Brandon Adams, Tim Tszyu and Erickson Lubin.

Stephen Fulton and Brandon Figueroa were set to confirm the number one fighter at super-bantam on September 18th but COVID-19 once again stood in the way of mouth-watering boxing. Nonetheless, the eventual fight will be a big one, and due to the talent on offer in this division the future looks bright. Michael Conlan is ready for the highest level, Murodjon Akhmadaliev looks a serious fighter, and Luis Nery will have a point to prove following his loss to Figueroa.

All eyes are rightly on the thrilling rivalry between Juan Francisco Estrada and Roman Gonzalez but below those two outstanding fighters are a number of boxers eager to prove a point. Srisaket Sor Rungvisai will believe he’s the best fighter in the division despite a narrow loss to Estrada and you also have quality competitors such as Donnie Nietes and Kazuto Ioka.

Josh Taylor went all out to prove he was the best fighter at 140lbs when defeating Jose Ramirez earlier this year. With his lofty position secured, Taylor, if he decides to stay at super-lightweight long term could have his hands full with Mikey Garcia and Gervonta Davis. There’s also the possibility of revisiting past rivalries with Ramirez and Regis Prograis. Montana Love is another fighter worth monitoring too.

With a Japanese flavour dominating the top spots, light-flyweight's premier positions could throw up a number of interesting scenarios pitting Kenshiro Teraji, Hiroto Kyoguchi and Masamichi Yabuki against each other. Elwin Soto and Daniel Matellon are also two fighters with their targets set on the number one ranking.

A new division cracks the top ten for the first time as 160lbs exits in place of super-featherweight. Shakur Stevenson's superb win against Jamel Herring in October was a star-making performance and it appears that a fight against Oscar Valdez is one of the best to make in boxing. Stevenson is quickly on his way to becoming one of boxing's biggest names so any fight featuring him will be of interest.

Off the radar (for now)

Of course, with 17 recognised weight classes, there will be seven that do not make the rankings each month. Some of them will be bubbling under, ready to gain (or regain) momentum. One notable omission this time around, for instance, is super-middleweight. With the weight class becoming the Canelo Alvalez show only for the final leg of his unification plan vs. Caleb Plant to stall from September to November, 168lbs encountered a loss of momentum that one would expect it to build back up on the strengths of the pound-for-pound king alone. Also in a strong position to move into and up the rankings in the near future is another division Canelo has dabbled in, light-heavyweight.