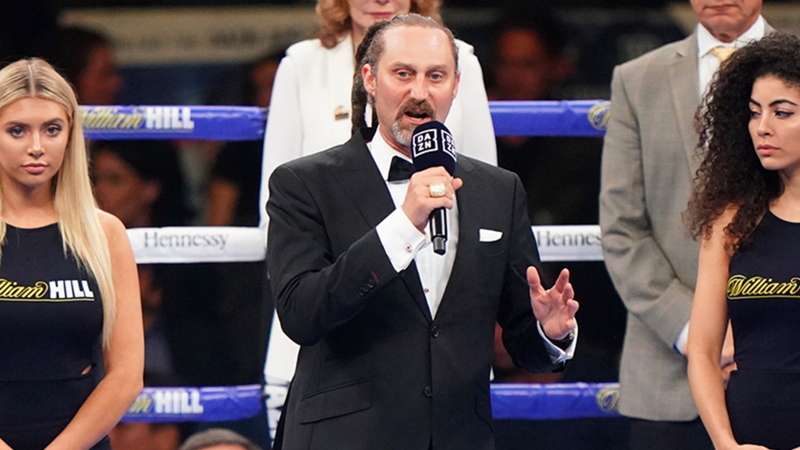 With his James Bond style and buttery Chardonnay delivery, you'd be hard pressed to find a smoother ring announcer than the one and only Michael Buffer. The venerable MC has lent his pristine vocals to some of the biggest professional boxing matches and sporting events for roughly 40 years with Let's Get Ready to Rumble being trademarked and synonymous to his name. Once those words reverberate before a boxing bout, Buffer skillfully segues between the red and blue corners, introducing each fighter's trainer, ring attire, weight, professional record, residence and name (with nickname) in that order.

Over in the mixed martials arts world, his brother, Bruce Buffer, abandons grace and embraces havoc with his vein-popping scream of an introduction for UFC fights: "IIIIIIT'S...TIIIIIIIIIME!" He then gestures over to the first fighter — sometimes coming inches away from him or her — and rattles off the combatant's MMA discipline, record, height, weight, residence and name in that order, before doing the same for his or her opponent across the Octagon.

Void from either introduction is the repetition of a fighter's surname. That's where David Diamante comes into play.

The veteran ring announcer is keeping an old boxing tradition alive by repeating fighters' surnames before bouts as evidenced by any of his recent work. Take the December 2020 tilt between unified world heavyweight champion Anthony Joshua and mandatory challenger Kubrat Pulev for example. Diamante proclaimed "This is it. The time has come. The fight starts NOW!" Diamante worked his way to the red corner first, introducing the challenger's trainer, ring attire, height, weight, record, residence and accomplishments, before announcing "Kubrat 'The Cobra' Pulev ... Pulev."

"I do announce surnames twice," Diamante tells DAZN News over a recent Zoom meeting. "Not everybody does it. In fact, I don't think there's anyone who does it now except myself.

"When I hear a fighter announced 'John Smith ... Smith' — to me, that's music," adds Diamante who has been a ring announcer for roughly 20 years. "I like the way it sounds. It sounds correct to me."

Diamante says he was inspired to repeat fighters' surnames after growing up and seeing some of his favorite ring announcers evoke the practice.

"But nobody else did it anymore and I wanted to keep it going. To me, it's like a boxing tradition and it's a New York thing. 'New York, New York, it's the city so nice they named it twice.' I really liked that."

Fellow boxing ring announcer Jeremiah Gallegos is happy that Diamante is keeping the tradition alive for the sweet science.

"It's quite classic," Gallegos tells DAZN News about Diamante repeating fighters' surnames, a practice that he doesn't do himself. "It's an old tradition that's been resurrected from David Diamante and David is a hell of a ring announcer. I'm glad he's doing it."

Outside of boxing, Bob Sheppard, the late longtime New York Yankees' public address announcer would introduce a player's number first, then his name and repeat the number. For example, "No. 2, Derek Jeter ... No. 2."

Diamante says that elocuted practice from "The Voice of God" resonates with him as well.

As far as the actual in-ring execution of repeating boxers' surnames, Diamante says he goes with feel rather than an actual hard internal count, although DAZN News clocked his pause from first mention of a fighter's last name to its repetition at anywhere from one to two seconds.

"I just kind of feel it," Diamante says about the timing at which to repeat a fighter's last name. "I try a little bit to breathe for a second ... and then I punch it again.

"I feel like these guys deserve that," Diamante adds of the extra mention of boxers' names. "That's another reason why I do it. And stylistically, it's a great way to do it."