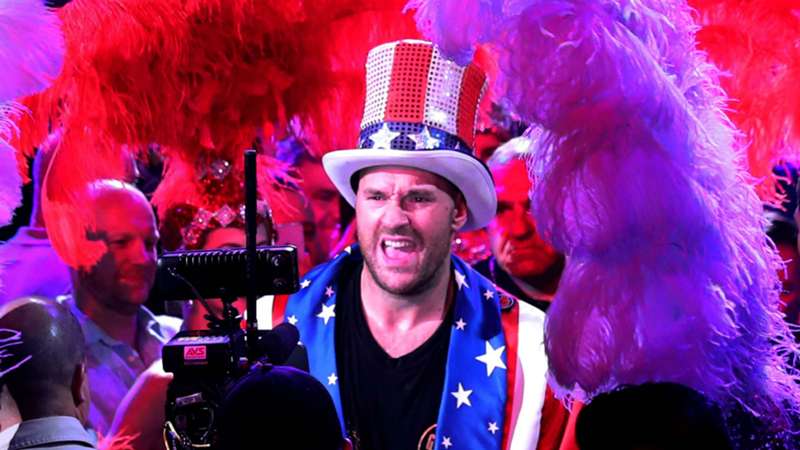 Tyson Fury is one of the biggest names in boxing, but he's still not a marquee attraction in the United States. How can "The Gypsy King" raise his profile?

Former undisputed heavyweight champion Lennox Lewis primarily fought in England. He sold out venues throughout the country. However, Lewis realized if he wanted to be recognized as a megastar and cement his legacy, he needed to make the trek across the Atlantic and ply his craft in America. Lewis traveled to the United States and faced the biggest names the division had to offer in Evander Holyfield (twice), Mike Tyson and Vitali Klitschko, and he became a star in the process.

Lineal heavyweight champion Tyson Fury has everything in the toolbox to become a star in the U.S. He's got the size (6-9, 257 pounds), the charisma and the skill inside the ring. How can Fury, who competes in his third consecutive fight in the U.S. on Saturday against Otto Wallin at the T-Mobile Arena in Las Vegas, get to the point of his fellow countryman?

For Fury to be a true star in the United States, the 31-year-old needs to start fighting opponents casual boxing fans actually know.

After a thrilling split draw against WBC champion Deontay Wilder in December, an immediate rematch appeared to be on the way. Before the ink could be put to paper, though, Fury signed a co-promotional deal with Top Rank, headed by Bob Arum.

The legendary promoter had other plans in mind for his newest signing. Arum wanted to build up Fury's name in the U.S. so that if a rematch with Wilder takes place on the scheduled date of Feb. 22, 2020, the sequel will be more significant than the reported 325,000 pay-per-view buys for the original. With Top Rank's fight cards airing on ESPN platforms, the idea made sense — put Fury on every significant ESPN show so he can be seen by as many eyes as possible.

The plan went into motion when Fury took on Tom Schwarz on June 15 at the MGM Grand Garden Arena in Las Vegas. What did we know about Schwarz? Nothing, except for the fact he was German, and after looking at his fight profile, he was undefeated.

Coming to the ring like Apollo Creed in "Rocky IV," Fury blitzed through Schwarz in just under two rounds.

"It was an amazing experience [fighting in Las Vegas]," Fury told DAZN News. "It was an experience I had been waiting for my whole boxing career because I finally got to fight there. I put on a great show, got a good win and sang a song afterward at the press conference and then went out and partied afterwards. So I ticked off every box of things to do in Las Vegas. I even won in the casino. I enjoyed it so much that I came back for seconds."

Coming back to "Sin City" for an encore presentation against Wallin was a head-scratcher for boxing fans and pundits alike.

You could understand why he took on Schwarz after the physical and mental war versus Wilder. Get your feet back under you, score an emphatic win, continue to build your fan base in America and then take on a top 15-contender next time out to show fans in the U.S. that you can beat legitimate guys, not just feast on tomato cans.

However, Fury and company went with Wallin. At the time of the fight announcement, the native of Sweden didn't even have a Wikipedia page, so it's no surprise Fury is expected to claim another easy victory. Sportsbookreview.com has Fury installed as a -2700 favorite, and Wallin is a +2000 underdog.

Arum defended choosing Wallin as Fury's next opponent, and Fury did the same.

"There’s nobody else to fight," Fury said. "If you look at all the other opponents that’s out there, Alexander Povetkin didn’t want to fight and took on my cousin instead. Wilder and [Luis] Ortiz are fighting each other. [Andy] Ruiz and [Anthony] Joshua are fighting each other. Charles Martin said no. Trevor Bryan is fighting Manuel Charr for the WBA title, and he turned down a fight with the 'Gypsy King' as well.

"There’s nobody else. Jarrell Miller popped for a drug test. The list goes on and on. You can only fight who is available."

While the statement is true that you can only fight who is available, money talks. If offered the right financial package, then Povetkin, Martin or Bryan likely would have at least considered facing Fury.

Taking back-to-back fights against names people haven't heard doesn't help Fury, and it showed at the box office for the Schwarz fight. Despite the announced crowd on fight night of 9,012 inside the MGM, the Nevada State Athletic Commission revealed that only 5,882 tickets were sold for a gate of $882,145. There's no word on estimated attendance for Saturday's fight, though sources have told DAZN News tickets haven't been selling well.

Putting Fury next to the Wallin types isn't going to get Arum and Fury to their desired spot. Fury should have been in the ring with an American fighter this time around, whether it was a guy like Bryan or even Miller following his suspension.

Fury is a marquee name in boxing. He should walk down any street corner and be bombarded with photo and autograph requests. One look at his strategy explains why that's not yet the case in the United States.