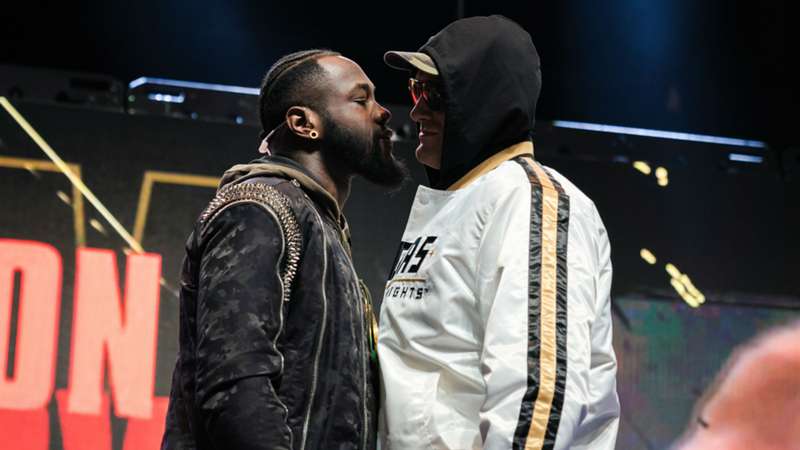 It may sound like blasphemy to suggest, but there is a reason that this rematch is reaching beyond the boxing community and taking over the world.

LAS VEGAS — There’s nothing in the world like a heavyweight title fight.

Well, let me rephrase that.

A world heavyweight title fight between two fighters in their respective primes with a litany of storylines to sink your teeth into.

Unfortunately, it had been decades since heavyweight championship boxing truly mattered to the mainstream. The Klitschko brothers held the sport hostage during most of the 2000s. Prior to that, noteworthy heavyweight clashes that captured the imagination of the world were few and far in between. During the 1990s, there were the legendary clashes between Riddick Bowe and Evander Holyfield, the epic atmosphere surrounding Holyfield-Tyson and the battles between Lennox Lewis and Holyfield.

But even those heavyweight tilts had their caveats. With the exception of Bowe-Holyfield, these heavyweight bouts had either clear favorites (Tyson-Holyfield) or featured fighters with blemishes on their record.

You may have to go back to Ali-Frazier 1 to recall a time where a pair of undefeated heavyweights in their prime squared off. Actually, the highly anticipated February 22 rematch between WBC champion Deontay Wilder (42-0-1, 41 KOs) and lineal champion Tyson Fury (29-0-1, 20 KOs) is eerily reminiscent of the 1971 clash that was coined “Fight of the Century.”

And it all started on December 1, 2018, when the two titans clashed and left the world salivating for more.

Like Ali, Fury was a champion who never lost his titles inside of a boxing ring. Granted, the circumstances were incredibly different, the fact remains that no opponent got the better of Tyson Fury inside of the squared circle. And, like Ali, Fury didn’t move like a heavyweight inside of that boxing ring. Not to mention, Fury was also coming off of a long layoff before stepping into the ring with a feared puncher.

Like Frazier, Wilder was known for his devastating punching power but there were questions regarding whether or not he should be recognized as the true heavyweight champion considering that he wound up with the WBC title that Wladimir Klitschko vacated. Frazier needed to prove himself to be champion against the undefeated Ali to silence those naysayers.

Frazier did just that with his unanimous decision victory over Ali.

Wilder and Fury resolved nothing with a split draw. But what was accomplished was heightened anticipation for a rematch — where the beauty lies in the chaos and unpredictability of it all.

What makes Wilder-Fury 2 the most anticipated fight since Mayweather-Pacquiao – and on some levels, even more so – is that there is almost an infinite number of possible endings to the fight. It could end in one round, go the distance, have multiple knockdowns, end on cuts, a split decision, unanimous decision, majority decision or – dare I say – another draw.

Although Mayweather-Pacquiao smashed gate and PPV records between two generational talents, the reality was that Pacquiao had just recently tasted a knockout defeat at the hands of Juan Manuel Marquez and there were questions surrounding his killer instinct. Of course, there was still intrigue considering Pacquiao’s unique style and how he rampaged through divisions, but most boxing pundits figured that Mayweather would win by decision.

Wilder-Fury 2 is incredibly different in that regard. For one, both are unbeaten and in their respective primes. Wilder, 34, is a fascinating war machine with a legendary equalizer that is unlike any weapon we’ve seen in boxing.

“They have to be perfect for 12 rounds and I only have to be perfect for two seconds,” Wilder has often proclaimed. But that isn’t lip service — those are facts with 42 wins, including 41 knockouts, as proof. One can argue that he allowed Bermaine Stiverne to survive 36 minutes just to prove a point because the rematch was a scintillating single round demolition that left Stiverne in a crumpled heap.

Look no further than Wilder’s last fight against Luis Ortiz for more proof. Whether purposefully or not, Wilder decided to be patient and give away rounds while looking for the perfect punch to sink Ortiz’ battleship. He finally detonated the bomb he was holding at the end of the seventh round when Ortiz fell asleep at the wheel in a fight he was in control of.

Fury, 31, is the polar opposite of "The Bronze Bomber." Although 20 of his 29 victories have come by way of knockout, the 6-foot-9 giant fights more like a lightweight than a heavyweight. He’s nimble despite his heavyset frame and sets brilliant traps for his opponents to fall into. It just so happens that his gigantic body carries enough weight that those punches tend to hurt his opponents more often than not.

“A boxer versus a puncher always makes a good fight, as we've seen over the generations and generations,” Fury said during fight week. “And 90 percent of the time the boxer always wins. So, I'm glad I’m the boxer instead of the puncher.”

There’s also the part where these two have met before and delivered a thrilling showdown and an epic, yet unsatisfying, conclusion that demanded a rematch.

You know the story by now: Fury boxed circles around a seemingly bewildered Wilder until Wilder – who could have packed it in due to frustration – clobbered Fury with a right hand to the temple and followed it with a thudding left hook that sent "The Gypsy King" crashing to the canvas. Nobody thought Fury would ever wake up. No, not before the count reached 10. Ever. Wilder blew a kiss to the crowd in celebration and danced to the neutral corner. But at the count of six, Fury stirred, rolled to his hands and knees and beat the count. Not only that, but Fury roared back and nailed his opponent with a bevy of powerful shots.

There’s a reason that the rematch carries so much intrigue.

For the first time in a long time, nobody has a clue what is going to happen. Not even the fighters, no matter what they have said in the buildup to the rematch.

“Anything is possible in that square ring,” Wilder said this week after confidently predicting that the fight wouldn’t go the distance. Unfortunately, in the back of his head is the image of Fury taking his Saturday’s best and getting to his feet. He also has to know that he would have lost the fight without the knockdowns.

As for Fury, he’s made it clear that he wants to win this fight via knockout inside of two rounds. But it’s not an arrogant statement. He has a reason for this.

“I said I’m going to get him out of there in two rounds because the longer the fight goes, the more opportunities he has to land that right hand,” Fury admitted.

Fury has tasted the power. And as much as his Undertaker-like rising from the canvas has been lauded, he would prefer to never have to deal with that again. Was that truly the hardest punch he had ever been hit with? If you ask him, he’ll deny that Wilder is the biggest puncher that he’s ever faced. But why tempt fate?

Wilder said that a leopard can’t change his spots when asked if Fury can transform into a knockout artist under the tutelage of SugaHill Steward. However, there were several instances in Wilder-Fury where "The Bronze Bomber" was buzzed by Fury’s underrated power. Nevertheless, Wilder doesn’t seem too concerned with what his opponent will bring to the table when they start the 13th round in Las Vegas.

“I don’t believe anything that he says,” Wilder said of Fury’s claim to finish him inside of two rounds. “I’m not concerned about what he says as much I am about what he does. I’m a man of action.”

Action. That's the most important thing. Fans should be treated to it in spades when the two resume their rivalry on Saturday night.