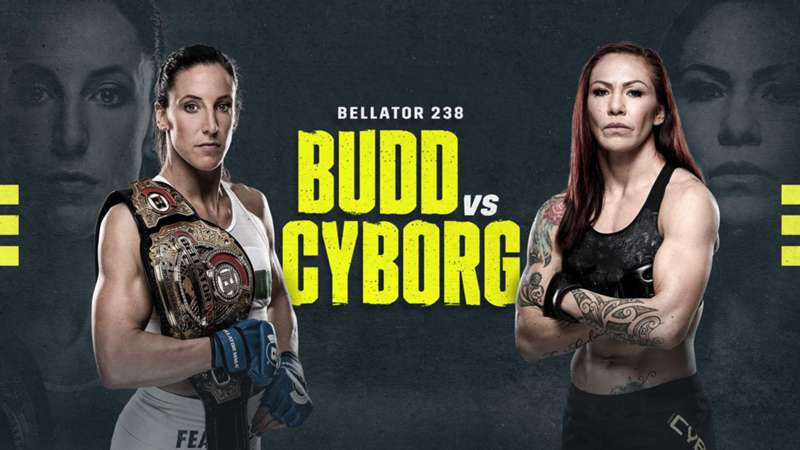 Cris Cyborg made her Bellator debut a successful one as she claimed the women's featherweight title with a fourth round TKO against Julia Budd.

Cris Cyborg is champion once again.

The former Strikeforce, Invicta and UFC champion added the Bellator women's featherweight title to her collection with an emphatic fourth-round TKO against Julia Budd in the main event of Bellator 238 at The Forum in Inglewood, Calif.

The superior striking of Cyborg was simply too much for Budd as she blitzed her opponent in the fourth round and finished her off with a wicked body punch that ended the night.

.@CrisCyborg caps off her brilliant Bellator debut with a round 4 TKO! 🏆#Bellator238 pic.twitter.com/byDfekcas7

Budd certainly didn't make it easy as her size, toughness and strength kept Cyborg honest. However, the striking technique from arguably the greatest women's MMA fighter in the history of the sport would turn out to be overwhelming, and a new sheriff reigns over the featherweight division.

Here's how it all went down.

12:40 a.m.: Cyborg def. Budd by TKO at 1:14 of the fourth round. After nearly finishing Budd in the third, Cyborg closed the show. She came right out, threw a leg and uncorked a vicious right to the body that hurt Budd. Then Cyborg unloaded a barrage of shots to the head and body until one final body blow sent Budd crumbling to the mat and a new champion was crowned.

Round 3: Much of the same from the second until the last two minutes when Cyborg sent Budd to the mat with another right hand but went with her this time around. Cyborg landed a bunch of shots and was looking to finish. Then in the last 10 seconds, Cyborg got into full mount and unloaded but the horn sounded. The end is near for Budd. (Cyborg 10-9, 30-27)

Round 2: Pretty dominant round for Cyborg. Her striking is on point and landing at will, especially with the knees to the head. Budd has to stop telegraphing when she's about to throw. Needs to change it up and in a hurry. (Cyborg 10-9, 20-18)

Round 1: Early on, Budd and Cyborg battled in the clinch, Cyborg threw a knee and took Budd down. The round looked to change when Cyborg landed a hard right hand and then slipped while throwing a head kick. Budd took advantage and was in side control. With about 40 seconds left, Cyborg dropped Budd with a right hand but couldn’t finish her off. The final right hand sealed the deal for Cyborg. How can Budd overcome the onslaught as Cyborg is now in control? (Cyborg 10-9)

12:14 a.m.: It is time for the co-main event of Bellator 238, as Julia Budd defends the women's featherweight title against Cris Cyborg. Budd (13-2) looks to make the fourth defense of her belt and run her winning streak to 12. Cyborg (21-2, one no-contest) is making her promotional debut after a turbulent three-year run in the UFC that included winning the 145-pound belt.

Can Budd spring the upset or does Cyborg win her fourth world title in four major MMA organizations?

11:57 p.m.: Caldwell def. Borics by submission (rear-naked choke) at 2:20 of the first round to advance to the grand prix semifinals.

Well, that wasn't what anyone expected. Instead of fighting on the defensive, Caldwell went on the offensive from the jump. He didn't let Borics get going whatsoever. Caldwell missed a head kick, threw a push kick and then took Borics down to the mat. From there, it was all Caldwell. He methodically advanced to take Borics' back and then quickly snuck the left arm under his open neck and secured the rear-naked choke for the submission victory. Caldwell advances to the semifinals against A.J. McKee later this year.

You could feel the animosity between Caldwell and McKee when they went face-to-face. Really looking forward to the matchup in what will be McKee's hardest test to date.

An Impressive Night for @TheWolfMMA 🙌

11:45 p.m.: It is time for the co-main event of Bellator 238, as Darrion Caldwell battles Adam Borics in the Featherweight World Grand Prix quarterfinal. Caldwell (14-3), the former bantamweight champion, advanced to this round by beating Henry Corrales by unanimous decision at Bellator 228 in September. Borics (14-0) made it to the round of eight by stopping Pat Curran in the second round at Bellator 226 in August.

For Caldwell to win, he needs to get it to the mat, as Borics is fantastic on the feet.

A fun fight but a puzzling decision as Corrales did more than enough to win. He controlled the action in the cage, was the aggressor and made Archuleta react to him. But a good win for Archuleta after losing his last bout against current featherweight champion Patricio "Pitbull" Freire.

Pettis and Khashakyan were having an exciting striking exchange when it appeared the latter stunned the former. Then Pettis dropped Khashakyan with a blistering right hook. When going to the mat, Khashakyan looked to be unconscious. Pettis landed a couple ground and punches and then quickly locked in the guillotine choke. Khashakyan wasn't willing to tap out and went to sleep.

Pettis made a definitive statement in his Bellator debut and put the bantamweight division, which currently doesn't have a world champion, on notice.

. @SergioPettis with the first round submission! 💥

Daniels' kickboxing was on full display. His kicks were crisp and his punches were hard and precise. Anytime he threw a shot, King went to the canvas and tried to get Daniels to the mat. But Daniels showed poise and didn't rush in. When King did get Daniels to the ground, Daniels kept his composure and was able to get on top of King. King left an opening and Daniels landed a series of heavy punches to finish it off.

10:22 p.m.: Emilee King def. Ava Knight via submission (rear-naked choke) at 2:18 of the first round. King made it look easy by scoring a quick takedown. After trying to gain position, King had Knight's back. She wrapped her right leg around Knight and immediately locked in the rear-naked choke. Knight tried as hard as she could, but she couldn't get out and the fight was stopped. Out of King's four wins, three have come by submission.

9:58 p.m.:  Cris Cyborg is in the building and sporting the jersey of basketball legend Kareem Abdul-Jabbar.

. @criscyborg just pulled up to The Forum in a Kareem Abdul-Jabbar @Lakers jersey! 🔥 @kaj33 | #Bellator238 pic.twitter.com/v5BLGVfB48

After a brief standup exchange to begin the second, Pico faked a kick and blasted Carey with a short left hook to send him packing. A much needed win for the 23-year-old. So much hype has been put on him and hasn't delivered to this point. What does it prove? It's hard to say, but this is a good spot. If he can use his Olympic-caliber wrestling with his lightning-quick hands then watch out. He's been too reliant with his hands, and it has cost Pico in the past. Being on the prelims had to be a humbling experience for him and a position he likely doesn't want to be in again.

9:21 p.m.: The featured prelim bout at Bellator 238 has Aaron Pico taking on Daniel Carey in featherweight action. A big spot here for Pico (4-3), having been stopped in his last two. How will he fair now that he's had a full training camp with famed trainer Greg Jackson? A defeat would be devastating.

9:20 p.m.: Welcome to DAZN News' live coverage of Bellator 238, highlighted by the women's featherweight title fight between Julia Budd and Cris Cyborg. Grab the refreshments, sit back and follow along in what should be an exciting night of action.