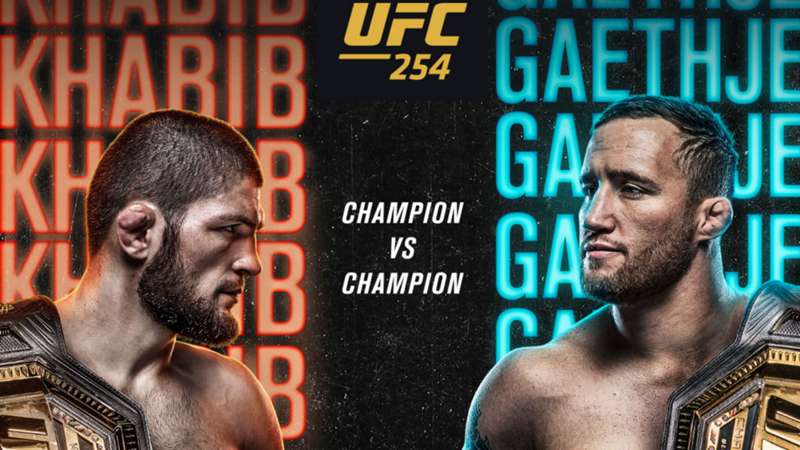 Everything you need to know about the highly anticipated lightweight title unification bout with Khabib Nurmagomedov and Justin Gaethje.

While many fans wanted to see Khabib Nurmagomedov meet Conor McGregor, they are getting the next best thing when the undefeated lightweight champion faces interim titlist Justin Gaethje in the main event of UFC 254 at "Fight Island" from the Flash Forum in Yas Island, Abu Dhabi.

The biggest fight of the year is finally here 🏆

Nurmagomedov (28-0) returns from a 13-month layoff after he pummeled Dustin Poirier at UFC 242 in September and won by third-round submission to successfully defend the title for the second time. The Dagestan native had been set to finally square off with Tony Ferguson at UFC 249 on April 18. But in the middle of March, Nurmagomedov left his training camp at the American Kickboxing Academy in San Jose, Calif., after reportedly being told by the UFC that UFC 249 would likely be taking place in the United Arab Emirates due to COVID-19 forcing the event to be postponed and not taking place at its original location in Brooklyn.

After getting into the UAE, Nurmagomedov was told to leave because the country would be closing its borders, and no one would be able to enter or fly out. The 31-year-old flew back to Russia to be with his family and continued to train. Ultimately, though, Nurmagomedov decided health and safety were more important than figuring out a way to square off with Ferguson.

Gaethje immediately stepped up to the plate and took on Ferguson for the interim belt when UFC 249 was shifted to May 9. The former World Series of Fighting (now Professional Fight League) lightweight titleholder battered Ferguson from start-to-finish to win by fifth-round TKO to capture his first UFC belt and snapped the former interim 155-pound champion's 12-fight winning streak in the process.

On paper, Khabib-Gaethje is the biggest fight of the year in mixed martial arts. You have an unbeaten and dominant world champion coming back to take on a guy who will be his toughest test to date because of his complete skillset, which is the type of fighter Nurmagomedov hasn't faced up to this point.

Can "The Eagle" continue his reign of terror? Or does Gaethje show the world why he is "The Highlight" and provide one more spectacular performance and pull off what many pundits feel is unthinkable?

Here is everything you need to know about UFC 254: Khabib vs. Gaethje.

When is UFC 254: Khabib Nurmagomedov vs. Justin Gaethje?

UFC 254: Khabib vs. Gaethje takes place on Saturday with the early prelims kicking the event off at 11 a.m. ET, before the pay-per-view main card begins at 2 p.m. ET.

Lock in those alarms ⏱ Saturday's PPV is at a special time!

UFC 254: Khabib vs. Gaethje takes place at the Flash Forum on the company's Fight Island in Abu Dhabi. Khabib has already fought in the United Arab Emirates, defeating Poirier at UFC 242 in September 2019. Gaethje has never competed in the country.

According to BetMGM, Khabib is listed as the sizable favorite, coming in at -334, meaning you'd need to bet $334 to win $100. Gaethje is the underdog at +260. That means a $100 bet can net you $260 if Gaethje can become the first person to defeat Nurmagomedov and is crowned the undisputed UFC lightweight champion.