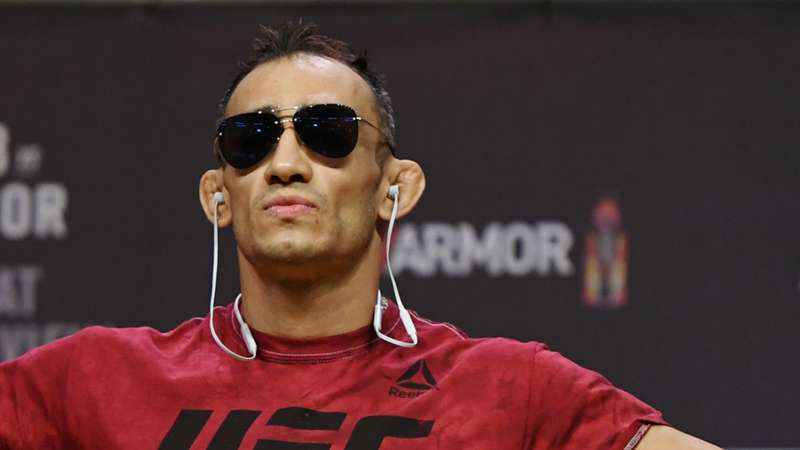 Ferguson didn't hold back, saying, "(Khabib) fell off the face of the Earth to me. ... The only dudes who sign on the dotted line are real f—ing men.”

Khabib Nurmagomedov is UFC's undisputed lightweight champion. Tony Ferguson will fight Justin Gaethje on Saturday in UFC 249 for the division's interim title, with the winner then being given a chance to unify against Nurmagomedov.

As far as Ferguson is concerned, however, there's nothing "interim" about the title he intends to win on Saturday. In a Tuesday conference call, Ferguson (25-3 MMA, 12 KOs) said his fight is "for the real belt" while taking repeated shots at Nurmagomedov.

Ferguson won the interim belt in UFC against Kevin Lee in October 2017, but was later stripped of the title due to injury, forcing him out of an April 2018 fight against Nurmagomedov. He has won against Anthony Pettis and Donald Cerrone in UFC 229 and 238, respectively, since then. Nurmagomedov (28-0, eight KOs) was originally slated to fight in UFC 249 before being forced to withdraw due to travel restrictions brought on by COVID-19.

Neither of those facts stopped Ferguson from calling out "The Eagle" — the two have had five fights scheduled in the past and then not happened.

“I’m going to be real, Khabib doesn’t even f—ing exist to me right now,” Ferguson said. “That dude fell off the face of the Earth to me. ... "The only dudes who sign on the dotted line are real f—ing men.”

Gaethje (21-2, 18 KOs) sees it a little differently than his Saturday opponent:

“The interim belt means for me that you’ll be recognized as the No. 2 man in the world,” Gaethje said. “Khabib can’t fight right now, so these are the two baddest men in the weight class fighting this weekend for the right to call themselves the best then ultimately challenge Khabib. I think we’re fighting for the opportunity to represent America against Khabib. That’s what I’m fighting for.”