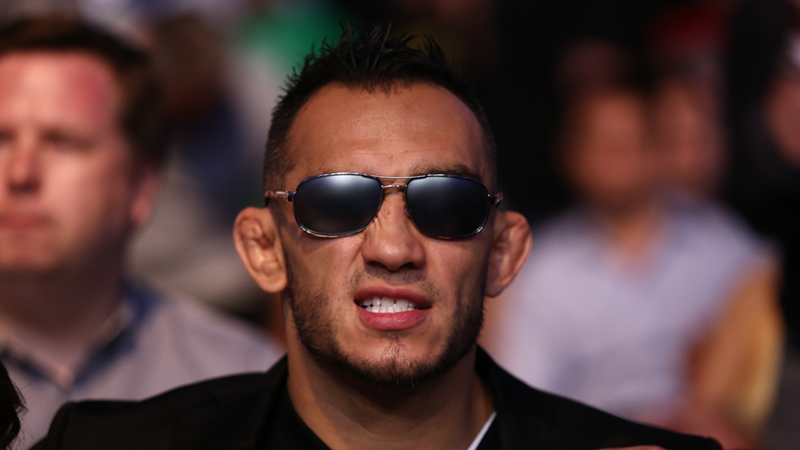 Everything you need to know about the return of UFC 249, which features Ferguson vs. Gaethje as the main event.

After being postponed because of the coronavirus pandemic on the event's original date of April 18, the UFC managed to relocate the event to the VyStar Veterans Memorial Arena in Jacksonville, Fla., for May 9. The previous main event is still intact as Tony Ferguson and Justin Gaethje will battle for the interim lightweight championship and an opportunity to face Khabib Nurmagomedov later this year for the right to be the undisputed UFC lightweight champion.

Ferguson hasn't loss since May 2012, having rattled off 12 straight victories and defeating the likes of Kevin Lee, Anthony Pettis and Donald Cerrone to name a few.

Gaethje counts a winning streak of his own, having won three consecutive bouts after back-to-back losses.

Both Ferguson and Gaethje stopped Cerrone in their last time out, in June and September 2019, respectively.

Much of the original card will carry over from UFC 249, including a heavyweight showdown between Francis Ngannou and Jairzinho Rozenstruik, Greg Hardy's return to the Octagon against Yorgan de Castro and a ferocious featherweight tilt between the hard-hitting Jeremy Stephens and Calvin Kattar.

Several new fights have also been added to the card. Among them is a UFC bantamweight title showdown between champion Henry Cejudo and former titlist Dominick Cruz. Fan-favorite Cerrone will also return for the first time since losing to Conor McGregor when he squares off with former UFC lightweight champion Anthony Pettis.

The night before the event, the Ronaldo Souza vs. Uriah Hall fight was called off after Souza tested posted for coronavirus. But the rest of the card will go forward as scheduled.

It's a fully loaded card that will take place without fans due to COVID-19 and has been touted by UFC president Dana White as one of the most stacked events the mixed martial arts promotion has ever put together.

Here is everything you need to know about UFC 249, including the time, odds, full fight card info and how to watch the event.

UFC 249 takes place Saturday, May 9, with the pay-per-view portion beginning at 10 p.m. ET. Ferguson and Gaethje are expected to hit the Octagon around 12:15 a.m. ET.

UFC 249 will take place at the VyStar Veterans Memorial Arena in Jacksonville, Fla. There will not be fans in attendance because of the coronavirus.

UFC 249 was originally schedule to take place April 18 in Brooklyn, then was moved to the Tachi Palace Resort Casino on Lemoore, Calif., before White was finally able to secure a new date and venue in Jacksonville.

Two other UFC events will take place in Jacksonville within a week of UFC 249, on May 13 and May 16.

In the United States, the UFC Fight Pass prelims, beginning at 6:30 p.m. ET, will be simulcast on UFC Fight Pass, ESPN, ESPN Deportes and ESPN+ in English and Spanish. The prelims will continue exclusively on ESPN and ESPN+ at 8 p.m. ET. The ESPN+ pay-per-view main card will kick off at 10 p.m. ET.

In Germany, Spain and Italy, the early prelims and prelims are on UFC Fight Pass, and the main card is available at 4 a.m. CET (Sunday) on DAZN, the global sports streaming service, and UFC PPV on UFC Fight Pass.

How much does UFC 249 cost? PPV price for Ferguson vs. Gaethje

Ferguson vs. Gaethje odds for UFC 249