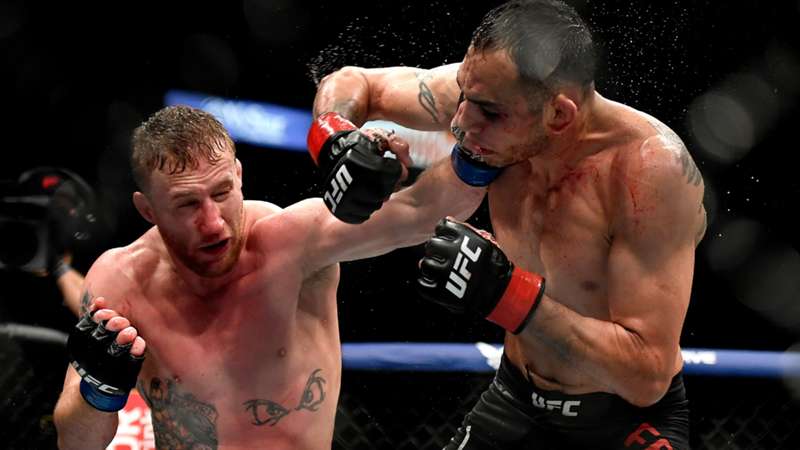 With the first major UFC event in the United States since the coronavirus pandemic in the books, there has been much speculation as to what the fighters earned at UFC 249.

The UFC 249 salaries were revealed by the Florida State Boxing Commission, which was in charge of overseeing the pay-per-view fight card that took place at the VyStar Veterans Memorial Arena in Jacksonville, Fla.

Tony Ferguson topped all fighters' pay despite being brutally stopped by Justin Gaethje in the fifth round of their interim lightweight title showdown. Ferguson earned $500,000 while Gaethje took home $350,000 and the interim UFC lightweight championship.

In the co-main event, Henry Cejudo retained his bantamweight title with a second-round stoppage of Dominick Cruz and then shocked the world by announcing his retirement from MMA. He earned $350,000 for what may be his final UFC event while Cruz raked in $300,000 for his first fight in three and a half years.

The next highest payout came courtesy of Anthony Pettis. Although he wasn't featured on the PPV main card, Pettis walked away with $310,000 while Donald Cerrone took home $200,000 in defeat.

Perhaps a little surprising is Yorgan De Castro's payout. He was featured on the PPV main card in the opening bout against former NFL defensive end Greg Hardy. While Hardy got the decision victory and a $180,000 check, De Castro had the lowest payout of any fighter on the card with $12,000.

Here are the full UFC 249 fighter payouts. The figures do not include deductions such as insurances, licenses or taxes, nor do they include any PPV cuts, discretionary bonuses, sponsorship payouts or UFC 249 Promotional Guidelines pay. These are simply base salaries.