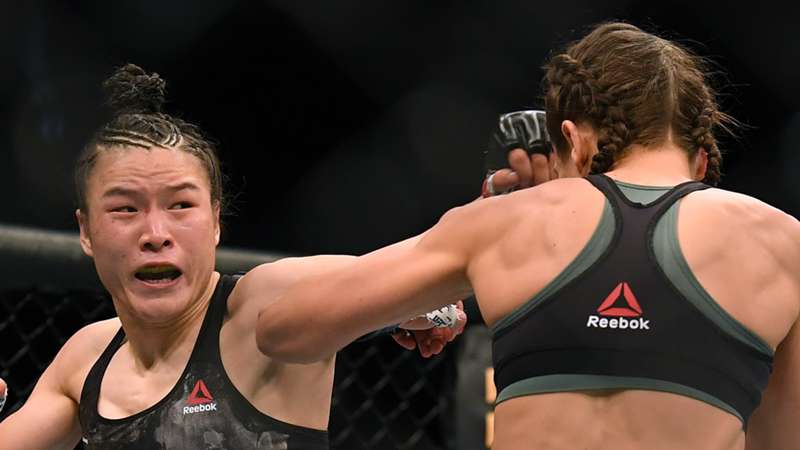 The numbers don't lie, further putting the instant classic between Zhang and Jedrzejczyk into perspective.

Many fight fans and pundits alike who watched UFC 248 at the T-Mobile Arena in Las Vegas felt like Zhang Weili's strawweight title defense against Joanna Jedrzejczyk was the greatest women's fight in mixed martial arts history.

When the dust settled on Zhang's split-decision victory over Jedrzejczyk on Saturday, the numbers attached to the firefight backed that claim.

When dissecting those numbers round-by-round, we're able to fully understand the devastation Zhang and Jedrzejczyk produced in their five-frame war. Interestingly, Jedrzejczyk — who tallied a significant strike advantage — increased her output nearly every round, but Zhang was able to win on the cards by landing the heavier, higher-impact shots.

Both Jedrzejczyk and Zhang landed 30 significant strikes apiece to set the tone for their instant classic; the Polish fighter landed her shots at a 46 percent clip compared to Zhang's 39 percent.

After eating some hard punches to lose the round, Jedrzejczyk upped her volume in the second and outlanded the champion 32-20. Within the frame, she landed strikes at a riveting 51 percent in comparison to Zhang's 30 percent. This is the round where Jedrzejczyk started to form a hematoma on her forehead.

The midpoint of this war had both fighters landing 50 percent or greater of their significant strikes at 38 shots apiece. Everyone in attendance at T-Mobile Arena and watching from home knew this bout would go down in history as arguably the greatest women's fight in MMA history — and one of the best fights in MMA, period.

The significant strikes between the strawweight champion and challenger remained even in the fourth, with Zhang and Jedrzejczyk each landing 40 shots. Still, Jedrzejczyk was slightly more accurate, landing 40 of 79 strikes (50 percent) compared to Zhang's 40 of 91 shots landed (43 percent).

Jedrzejczyk landed 46 significant strikes in the decisive frame — compared to Zhang's 37 of 103 shots landed (35 percent) — but by then the Chinese champion had done enough damage in judges' eyes to get the nod on the cards.