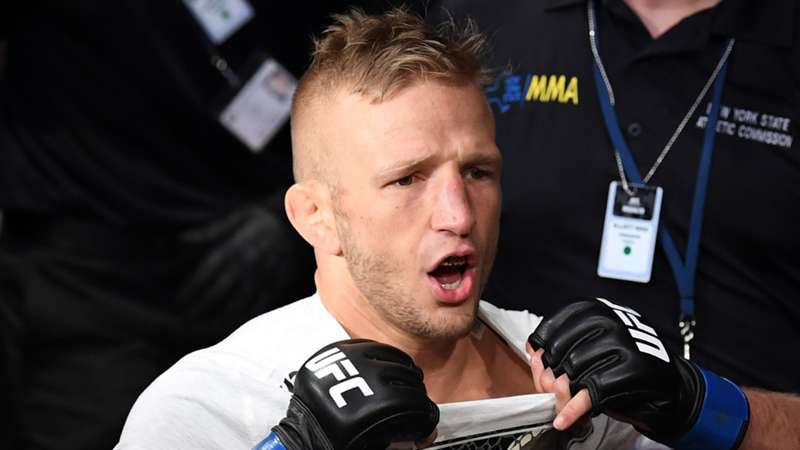 Dillashaw makes his highly-anticipated return and immediately faces a staunch test in Sandhagen to headline UFC Fight Night on Saturday.

A convincing victory over Cory Sandhagen would mark just the comeback splash that TJ Dillashaw is looking for.

Dillashaw will look for just that, as he returns from a two-year suspension for PED use to face second-ranked bantamweight Sandhagen in the headliner of UFC Fight Night. It all takes place from the UFC Apex in Las Vegas on Saturday night.

A hungry Dillashaw knows that a win over Sandhagen would inch him once step closer to becoming a three-time bantamweight champion.

"100 percent a title shot is next. I go out and beat Cory Sandhagen, and I'm fighting for the belt," Dillashaw told DAZN News.

After feeling like the Petr Yan-Aljamain Sterling fight in March was lackluster, Sandhagen, too, believes that a victory Saturday night will punch his bantamweight title shot into existence.

"This one is this one that stamps the passport," Sandhagen said to DAZN News. "I get to fight for the title after this one. This is that fight. Going into the Frankie (Edgar) fight obviously went the way that it went, so I was a little bit more confident in that too. But this to me, is the stamp in the passport. This is beating one of the guys that's considered one of the greatest bantamweights of all time. What this fight is to me is definitely the biggest fight of my career."

Dillashaw last fought and lost to Henry Cejudo in January 2019 before his suspension kicked in.

Sandhagen is coming off a 28-second KO of Edgar this past February.

Will Dillashaw get back on the bantamweight map in a huge way or will Sandhagen emerge as the victor and await to clash with the winner of Sterling-Yan 2?

Here's everything you need to know about how to watch UFC Fight Night: Sandhagen vs. Dillashaw.

The UFC Fight Night card gets underway at 7 p.m. ET/12 a.m. BST, before the headliners enter the Octagon for the main event at approximately 9:30 p.m. ET/2:30 a.m. BST. Though that time depends on the length of the earlier fights.

What channel/stream is UFC Fight Night: Sandhagen vs. Dillashaw?

The Sandhagen vs. Dillashaw main card can be watched live on television on ESPN in the United States. You can also live stream the card via ESPN+. Over in the UK, the event will be on BT Sport 2.

Where is Sandhagen vs. Dillashaw?