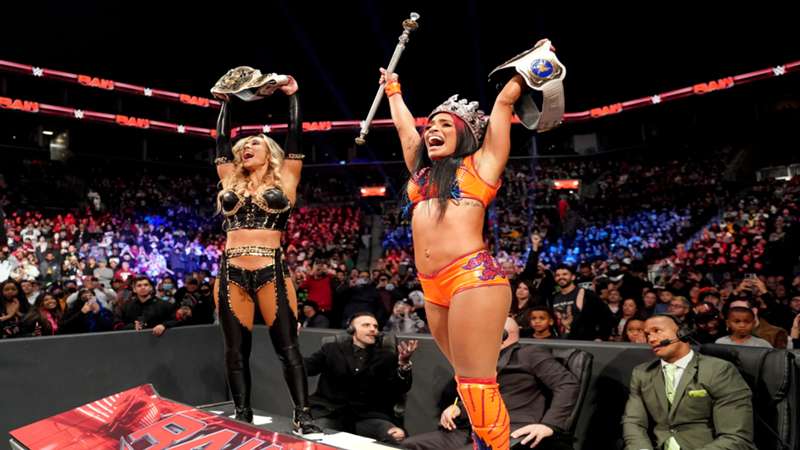 The WWE couple discuss their reality show and everything about their relationship.

Couples are becoming more commonplace in WWE. You have Raw Women's Champion Becky Lynch and Seth Rollins, Hall of Famers Edge and Beth Phoenix, and The Miz and Maryse.

On Monday, Graves and Carmella debuted their reality show on WWE's YouTube page, "Corey and Carmella", which was two years of filming their relationship and everyday life at their home in Pittsburgh.

Ahead of the show's premiere, Graves and Carmella talked with DAZN News about the show, when they realized the relationship could work, when they are getting married.

DAZN: You're starting to see more couples in WWE come out and say they are together. When did it click for both of you guys where you are like, ‘Ok, this could really work’?

Carmella: You always say it's whenever we actually have a conversation, and I hang with you on the conversation. We were sometimes chatting, and it'll be like three o'clock in the morning, and we're like ‘Holy Moly, I need to go to bed. We just have such a deep connection and that I think has just attributed to the success of our podcast, the show, and just our relationship in general.

Corey Graves: I think I've known for a long time. The genesis of our relationship was not put in a glowing light, and it was covered on Total Divas back then. Once the dust settled and everything had gotten back to peachy keen, then I realized, ‘Wow, she's still here’. That to me, just counted for a lot that she went through all the turmoil with me and was my partner through all of it. That was when I was like, ‘Oh ok, this is real. This isn't just some fun thing. This is the genuine article.

DAZN: How difficult was it for you guys that your relationship got put out there for the world to see and what made you guys realize we're better together than being apart?

CG: I don't think anyone wants the relationship to start out the way ours did. It was a fallacy. The facts have come out since then. It was an angry reaction and heat of the moment. Social media doing what it does. Luckily, that's all been debunked by this point. But to start any relationship at literally the worst possible scenario. Talk about fighting from the ground up. That to me, like I said from the early goings, the fact that she didn't run screaming into the hills, which she would have had every right to do going I don't need this headache. I don't need this drama. I'm the most beautiful woman in all of WWE. I can have any guy I want. But for some reason, she stuck with me, and from that point forward, I realized it's a cliche that she's a ride or die, but I was like this is this is my person, and I've gone over and above since then to protect and continue to grow this relationship from for that very reason.

CG: We get to walk a fine line because I am quote, unquote, a bad guy commentator, and she is a bad guy character. It's fun for me. There are a few superstars, and throughout my commentary career, I just get to be ridiculous. I go over the top on purpose, and I hope that I'm making some people mad, and I hope I'm making other people laugh. So when she comes out and I get to gush and talk about how amazing and astounding and even when she's not in the ring, I'm talking about her, and you got Jimmy and Byron shutting me down. That's just a lot of fun for me. Three hours is a long time to broadcast anything.

I look forward to those sort of segments to take a breath. I get to have so much fun when she's out there.

Carmella: People hate me because they hate you. Regardless, even if I was a good guy, people would not be able to stand me because they can't stand him. So I'm guilty, I guess by association.

CG: As far as most of the WWE Universe is concerned, we're bad, bad guys. So this show is a window into our life when the WWE cameras aren't rolling, and we don't have an arena full of people.

Carmella: Corey, as you know, anyone that knows him on Monday Night Raw, he's obnoxious, over the top, this bad guy. Then you see him in real life, and he's very sensitive, sweet, and endearing, which is I'm excited for the fans to see who he really is in real life because this is the man that I fell in love with.

CG: We needed to get the people talking. We're about to launch the hottest new reality show on YouTube. But the sexy aspect of it is just a small portion of what the show is about. We put that out there in hopes of people going, ‘What the hell is this’? So far, it's worked. We’re getting a lot of feedback on social media. Even friends of ours are going, ‘What is this? What are you doing? What are you putting out there’? It's safe to say it's not going to be some raunchy, nasty NC-17. (Maybe) PG-13, TV-14. We lean into the sex aspect of it because it's a big part of our relationship and on our podcast, Bear With Us. We discussed that a lot. It's 2022. It's beyond the time of having to be ashamed of this.

DAZN: A couple of questions about the household. Who is the better cook?

CG: Definitely her without question. I can barely make macaroni and cheese.

DAZN: Who keeps it clean in the house?

CG: She definitely takes the cake there. I'm not a messy guy.

CG: I clean up after myself. I'm not quite as neurotic.

Carmella: He puts the (toilet) seat down.

CG: I clean up after myself. I even occasionally do my own laundry, which is a real it's a new frontier for me, but I'm very excited about it. Because if I like to have clean underwear, I need to make sure that I wash them because otherwise, I'm just going commando for a couple of days at a time.

DAZN: Who's the better dresser?

Carmella: Here's the thing, the answer to all of these questions that could go for both of us, but I would say I'm just a little bit more turned up.

CG: She the fashionista of the house. I'm relatively lazy.

CG: Never in a million years envisioned a situation where I would have to wear a suit to work. That was why I wanted to become a wrestler. So now I find myself as a commentator, and I'm like, ‘Wow, Ok suit, suit. Now, I've been wearing suits for years. Now you've got guys showing up where loud suits are in right now. So I'm thinking now I got to go in a different direction. I've got to do something else. I like to keep it a little more simple, but I put forth a little bit of an effort.

DAZN: So you're not calling Seth (Rollins’) people?

CG: Here's a little DAZN exclusive. The person who's making all of Seth Rollins suits, I've been wearing that stuff for years. The very first time Rollins wore it, I think it was like a bright pink suit. I looked at it, and I said, ‘I think that looks like the suit that I had’. I said to him, ‘What brand is that’? He showed me, and I said, ‘I have it in blue. I wore it at SummerSlam last year’. Like three or four times, there's been things that he showed up on Raw wearing, and I'm going, ‘God, they just sent that to me. So Seth Rollins is why I've leaned into the leather jacket, t-shirt sort of fashion, and a lot of turtlenecks these days because it's no use trying to compete. I just changed lanes.

DAZN: What day is the wedding?

CG: No rest for the weary.

Carmella: For me, I just feel like things sort of slow down a little bit after WrestleMania. We don't have an offseason. It's just picking and choosing where it makes the most sense. For me, I wanted to have a short engagement because I eventually want to have kids and start a family.

CG: She didn’t want to give enough time to chase me off. That's all.

Carmella: Before he changes his mind. Get him locked up. It was the perfect time. We can finally decompress after WrestleMania. We have a few weeks off after that. We're going to go to Hawaii and just enjoy our honeymoon.