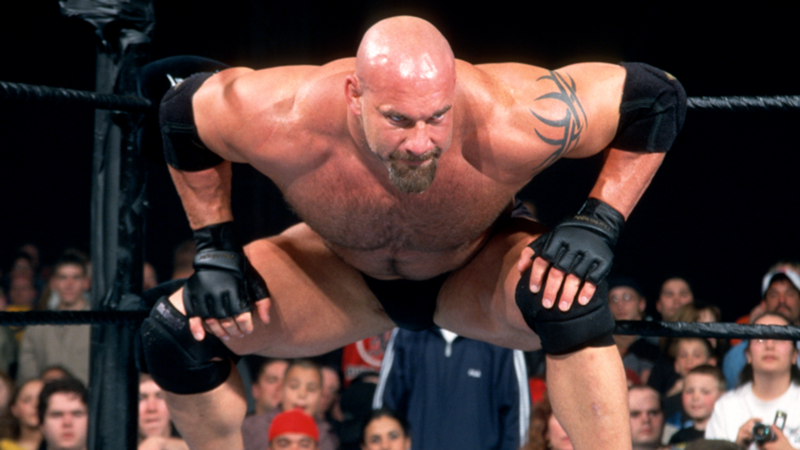 The wrestling icon is days away from a chance to become WWE champion.

Bill Goldberg has just about it done it all in professional wrestling.

At the age of 53, Goldberg is still delivering spears and jackhammers to anyone who steps in his way. He gets a chance to make history against a new opponent when he looks to win the WWE championship on Saturday at WWE SummerSlam against Bobby Lashley from Allegiant Stadium in Las Vegas.

Before the monumental matchup, Goldberg talked with DAZN about still stepping through the squared circle, possible retirement in his future, and who's next as future opponents?

DAZN: You made that great return in 2016 in doing the program with Brock Lesnar leading into WrestleMania 33. Did you feel you would ever want to continue doing this at 53, and are you even surprised that you're still doing this at this stage?

Bill Goldberg: Yeah. I'm forgetting how many times I've retired and come back. It's getting a little redundant. Now, people are like, ‘Yeah, right, you're gonna retire.’ But yes, I think it's winding down. You try to provide everybody with a glimpse of what you used to be, and it gets tougher and tougher each year, there's no question. But mentally, I’m still at the same place. With a little bit of prep time, I think physically, I can be somewhat similar to what I used to be. I owe the business a lot. I really do. For me to walk away and not get back to it, that's unacceptable. So I'm trying to be the best Goldberg they remember, and I'm trying to fulfill my obligation and my duty to the business. There are still people that I have yet to beat up. So as long as all of that is still the case, then I still keep chugging.

DAZN: Who's number one on the list of who you want to beat up?

BG: Right now, it's Bobby Lashley, and it has been actually for a while, and I've wanted to be in the squared circle with him for years. I think it's a formidable matchup for both of us. I think it's a logical matchup. I liken it to when I used to wrestle with Scott Steiner. That always provided fireworks. I don't think this is going to be any different.

DAZN: I was at the Aug. 2 Raw in Chicago, and you got this massive reaction when you came to the ring. Why do you feel like you still get that gigantic reaction every time you make the walk?

BG: I think because people believe that since I'm here, I have the ability to shock the world at any moment. I have the ability to bring violence to a level that they have never seen in the ring and that they are not used to seeing. And so with that chance, with the option of that always happening, I beat Brock in 90 seconds. Nobody saw that happening. Nobody saw that coming. My character has always been based upon surprise. I've been able to do things that people have bet against me and been able to come into and out of situations that logically, I wouldn't really have a chance. But I'm freaking Goldberg, so I'm different than 90 percent of the people. I still believe that people have that in the back of their minds like, ‘Oh shit, what's gonna happen? Who's gonna get sacrificed tonight?’ I think I still, at this age, I'm able to bring something to the table that very few people can still do, whether they're in their prime or not.

DAZN: There's a lot of guys I think you could still face after the match at Summerslam. Three names come to my mind, and I want to get your thoughts. First, John Cena is one people still clamor for. Second, the matchup with you and Roman Reigns that we didn’t get to see at WrestleMania 36 and a name people have been bringing up here and there, and he had good things to say about very recently, Matt Riddle. Is there any interest in any three of those guys?

BG: Yeah. The cocky kid (Riddle) spouting off his mouth in the beginning, and I didn't appreciate it very much by any stretch of the imagination. But the guy has put in a lot of frickin hard work and a lot of hard work, and he's dedicated his life to this business. Whether I like him as a human being or not, I have to understand and appreciate his passion for the business and his work ethic. Because he works hard and that I appreciate as an athlete and as a human. Is he a prick sometimes? Absolutely. But that's him. That's his character, and so am I.

Cena, that's always been a dream. Never been in the ring with him. We're two completely different characters. Hey, you never know. You never know.

Obviously, I want Roman bad. I want a piece of somebody from Georgia Tech. Like, I can taste it. The comparisons, the football background, I truly believe that’s a match that needs to happen. Am I clamoring for it? Am I begging for it? Am I holding my breath for it? No, I do what my job asks me to do. I do what my boss asks me to do to the best of my ability, and then I ask for them to point me in the next direction. I'm not a booking agent. I'm not on the booking committee. They don't pay me to be in creative. Now, if they ask my opinion on something, I'm sure as hell going to give it to them, or an idea, a direction, or a list of who I'd like to face. No one's ever asked me. But if they did, I would not hesitate for two seconds to list at least two of the three that you mentioned. Big E has to be on that list. I've watched him for years develop, and I'm very proud of him. I do remember when he was in my autograph line 150 years ago, as a little kid having aspirations of doing things that he's doing now. The road that he's taken and the hard work that he's put towards it, he's reaping the benefits, and I'm extremely proud of him. I'm very happy for him. There are still people that I need to smash up. And you brought up a very good list for sure.

DAZN: What is that going to mean to you to walk out one more time at SummerSlam in front of over 40,000 people in another big-time match?

BG: Personally and professionally, I'm pretty proud of myself that I'm still relevant, that I'm still a source that my employer and the fans believe that I'm still able to be somebody that matters. I will back that up, and I will reinforce that thought process with the night of the 21st at Allegiant Stadium against Bobby Lashley.

All I can say to Bobby is, ‘You better be ready kid because this is a culmination of a lot of years and a lot of things that have run through my head and that are running through my body, and I just hope he’s ready.'