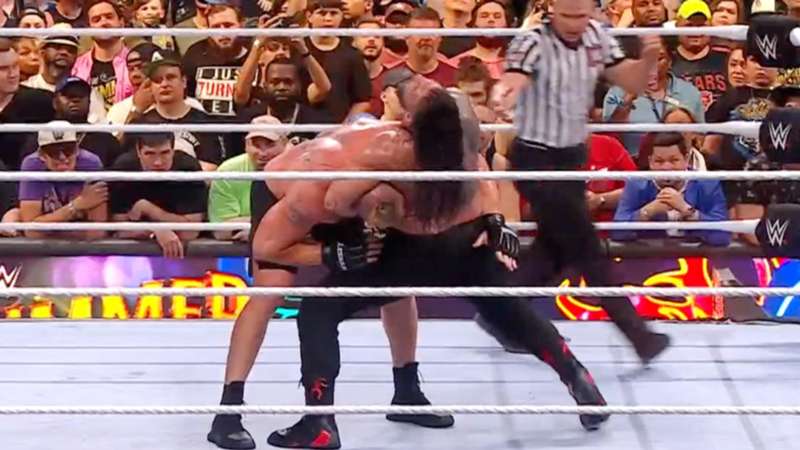 What a Last Man Standing match. We saw tractors, the tractor lifting the ring and it being on a tilt with Reigns rolling out of the ring, tables, briefcases, and more.

Lesnar and Reigns delivered the brutality and then some. Lesnar almost had Reigns finished on more than one occasion, and Reigns did the same. The fans were on their feet wondering who would stay down.

Reigns connected on one more belt shot to down Lesnar. To ensure he didn't get up, Reigns and The Usos dumped everything ringside to keep Lesnar down to the count of ten to remain the king of WWE.

By far, the best Last Man Standing match I've ever seen. A fantastic story told by both guys.

Brock Lesnar coming out in style

facebook twitter whatsapp
It's time for the main event of WWE Summerslam as Roman Reigns puts his Undisputed WWE Universal Championship on the line against Brock Lesnar.

It's been promoted as the final match between the two. Who gets it done?

Rousey controlled the entire match, working for the armbar and Morgan finding a way to escape.

The former UFC women's bantamweight champion locked in a triangle armbar. The referee looking at the shoulders of Rousey, counted to three. What he didn't see was Morgan tapped out before the three count.

Very interesting way to go about that. But well done.

Morgan shocked the wrestling world when she cashed her Money in the Bank briefcase to win the belt at the beginning of the month.

I am intrigued to see what the move will be here.

Solid match but not as good as the one at the beginning of the month. Montez Ford looked to have the match won for The Street Profits when he hit his sensational five-star frog splash.

But he bounced off of Jey Uso and only got a two-count. Ford blamed special referee Jeff Jarrett for a slow count. The Usos dumped Ford over the guardrail and into the fans. The Usos took care of Angelo Dawkins when they hit the 1D to remain the champions.

I don't get what the point of the match was if The Usos were going to retain. New champions need to happen sooner rather than later.

facebook twitter whatsapp
Now at WWE Summerslam 2022, The Usos put their Unified Tag Team belts on the line against The Street Profits. This should be the show stealer like it was at Money in the Bank.

Like Logan Paul, McAfee has the wrestling gene inside of him. Despite Corbin being the bigger foe, McAfee showed great athleticism and his knack for selling moves.

The match came down McAfee flipping out of The End of Days and pushed Corbin into the referee. McAfee punted Corbin in the groin, went to the top rope, and hit a Canadian Destroyer for the win.

I want to see McAfee inside the ring more because he's a natural.

McAfee shined in his match at WrestleMania 38 against Theory.

Can he do it again?

A fun match that had the heels looking like they were on their way to victory until the music of their former leader, Edge, hit. The former WWE champion took out his former partners in crime. That led to the Mysterios hitting the 619 and Rey connecting on a splash for the victory.

Not much reaction to Edge returning which is disappointing.

This match stems from Judgment Day's attack on The Mysterios on this past Monday's Raw.

Theory tried everything to get out of the match. He attacked Lashley with his briefcase before the bell rang and attempted to leave the ring.

But Lashley caught up to him and had things in control from there.

He beat Theory from pillar to post, punctuating with The Hurt Lock, which left Theory with no choice but to tap out.

Do we see Theory later tonight?

Could be a monster night for Theory

Theory has been teasing beating Lashley to regain the belt and cashing in his briefcase against the winner of the main event between Roman Reigns and Brock Lesnar.

Just like at WrestleMania, Paul shined yet again. He showed great athleticism in doing moves off the top rope, sold The Miz's moves really well, and the crowd was behind him throughout the contest.

With Miz lying on the announcers table, Paul went back to the top turnbuckle and nailed a picture-perfect frog splash through the table.

Miz's wife, Maryse, jumped up on the apron and tried to distract Paul. Miz grabbed Paul's necklace but missed him and hit his wife. Paul hit Miz's own finishing move, The Skull Crushing Finale, for the pin and victory in his singles debut.

Paul's athletic ability is remarkable and has caught on fairly quickly. Hopefully, we see more of him inside the ring.

It is Paul's WWE singles debut. He did well at WrestleMania but that was in a tag team situation.

Then former WWE Women's Champion Bayley made her grand return after being away for over a year. Then Io Shirai joined her along with former NXT star Dakota Kai. The trio hit the ring, ready to pounce on Belair. Then Lynch came from nowhere to have Belair's back. The heels left much to the dismay of the fans.

Once again, a fantastic back-and-forth affair between Belair and Lynch.

Lynch appeared to be on the verge of winning the belt one more time as she connected with the Manhandle Slam. But Belair kicked out. Lynch took Belair to the top and went for another attempt at her finisher. Belair reversed and performed an excellent Spanish Fly. She quickly grabbed her, hit the KOD to retain the belt.

Excellent way to kick off the show.

facebook twitter whatsapp
We are kicking off the main card of WWE Summerslam as Bianca Belair defends the Raw Women's title against Becky Lynch.

Lynch made her return from a 16-month layoff to beat Belair at last year's Summerslam. However, Belair got her win back at WrestleMania to regain the gold.

The rubber match is here. Who gets it done?

Logan Paul is ready for his WWE singles debut