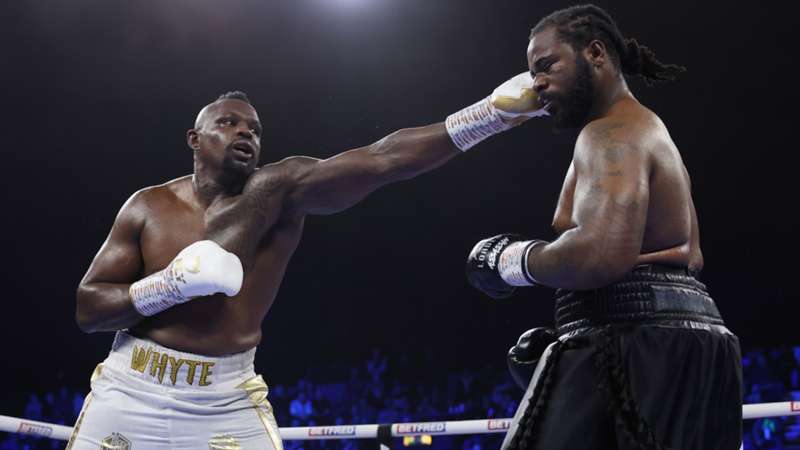 Dillian Whyte overcame Jermaine Franklin in a gruelling 12 round contest.

This was a chance for Whyte to make a statement to the rest of the heavyweight division, however, Franklin proved he was a worthy dance partner in what was his first 12-round fight.

From the opening bell Whyte was on the front foot, but Franklin was willing to go toe-to-toe with 'The Bodysnatcher' and targeted the body in order to find openings.

As ever with a Whyte fight, it takes time for the Brixton man to ease himself into the contest and this seemed to be case once more as he began to utlise his jab in the second round and throw some hard-hitting body shots of his own, but whatever Whyte threw, Franklin absorbed.

With this being Franklin's first 12-round fight, tiredness seemed to already be settling in with his punches beginning to lack power in round four compared to the opening exchanges.

Franklin then found a second wind in the sixth and threw some combinations of his own, while Whyte became too comfortable with the pace of the fight.

The American heavyweight's work was starting to pay off when he started to find his way past Whyte's guard in round eight with a right uppercut, a punch which has often sent 'The Bodysnatcher' to the ring canvas.

Franklin continued to dominate and rocked Whyte with a right hand in the ninth as both showed signs of exhaustion.

The final two rounds saw the fight get messy as a result and it looked like the fight was going to have an underwhelming finish.

Luckily the final round saw Whyte go on the hunt for a stoppage despite instructions from his coach Buddy McGirt to not go for the knockout. Both men left it all in the ring in the closing stages and with less than a minute to go a left hook from Whyte sent Franklin stumbling into the ropes, but there wasn't enough time for Whyte to capitalise and the fight went to the scorecards.

The judges' scores reflected the close nature of this contest with one scoring it a 115-115 draw, while two cards read 116-112 in Whyte's favour.

But is Whyte ready to face Anthony Joshua for a second time after this win?

Judging by that performance, not yet, it was his first fight under new trainer Buddy McGirt and maybe another in early 2023 against a lesser opponent would be best for Whyte before stepping in the ring with AJ next summer in what could be a huge stadium fight.

Re-live the best moments from Saturday's card at the OVO Arena Wembley below which included a thrilling British heavyweight title fight between Fabio Wardley and Nathan Gorman.

Dillian Whyte has been declared the winner by majority decision.

If Whyte is to face Anthony Joshua next, there is a lot of work that needs to be done after this victory over Jermaine Franklin.

Round 12: Whyte leaves it all in the ring

Dillian Whyte went all out in the search for a stoppage, but Jermaine Franklin managed to hold on.

An opening presented itself to Whyte in the final minute with a left hook sending the American back onto the ropes, but 'The Bodysnatcher' was unable to finish the job with his opponent saved by the bell.

We await the verdict from the judges on what was a close fight.

Round 11: We're going the distance

The fight has become a bit scrappy with both men becoming tired.

Will we get an explosive finished? Or will the fight go to the judges' scorecards?

The final round awaits.

Round 10: Whyte ends round with clubbing right hand

Dillian Whyte has reverted back to using his jab, but it's something that Jermaine Franklin avoided with ease.

Whyte finished the round with a clubbing right hand which will have caught the attention of the ringside judges.

If Dillian Whyte is to make a statement, he needs to step it up when it comes to his output.

Jermaine Franklin meanwhile finished the round strong with a right hand which rocked Whyte.

Round 8: Franklin dominates another round

Jermaine Franklin has enjoyed his best round so far in this fight.

He is finding success and getting past Whyte's guard with a successful right uppercut.

Round 7: Strong finish from Whyte

Jermaine Franklin looked in control until the final minute of the round when Dillian Whyte unleashed a barrage on Franklin.

The American however isn't showing any signs of damage.

Round 6: Franklin finds his second wind

Jermaine Franklin has found a new lease of life.

He managed to keep Dillian Whyte quiet for the majority of the round and managed to land a few combinations of his own.

Whyte needs to increase the intensity if he is to regain control.

With Jermaine Franklin showing signs of exhaustion, Dillian Whyte is able to toy with his opponent.

There were some good combinations from Whyte, but Franklin is still able to reply, whether he can keep it going is another question.

Round 4: Is Franklin tiring?

Tiredness seems to be settling in for Jermaine Franklin.

The American's punches are lacking the zip that he had in the opening stages, will Dillian Whyte be able to capitalise?

The thud of Dillian Whyte's body shots can be felt throughout the arena, but Jermaine Franklin is absoring them well.

It will be interesting to see if Franklin can maintain this resilience as the fight progresses.

Round 2: Whyte finding success with the jab

A much better round from Dillian Whyte who is easing his way into the fight.

The double jab is proving to work for Whyte who continues to remain on the front foot in an attempt to push Franklin towards the ropes.

While Jermaine Franklin has been put on the back foot by Dillian Whyte, the American looks composed and is targeting Whyte's body in order to create openings.

Whyte vs. Franklin is underway

facebook twitter whatsapp
Our main event of the evening between Dillian Whyte and Jermaine Franklin is underway.

Darren Barker on tonight's fight and what next for Dillian Whyte

While we wait for the main event between Dillian Whyte and Jermaine Franklin, check out Darren Barker's DAZN column.

The former world middleweight champion looks ahead to the fight and discusses whether Whyte can finally become a world champion despite the recent setbacks.

He will have a keen interest in tonight's main event with the winner likely to face Joshua in early 2023.

Fabio Wardley is the new British heavyweight champion after Nathan Gorman's corner threw in the towel in round three.

After a close opening round, Wardley increased his output thereafter with two right hands flooring Gorman in the second.

Gorman seemed to have recovered well in the third, but was knocked down again by another Wardley right hand and after meeting the referee's count, Gorman's corner didn't like what they were seeing and threw in the towel.

This was another hard-hitting performance from Wardley who now moves to 15-0.

As expected, this fight has exploded.

Nathan Gorman seemed to be in control during round two, but a Wardley right hand floored his opponent at the halfway stage.

Wardley then continued the assault and dropped Gorman with another right hand in the closing moments.

We've got a cracker of a fight on our hands!

Wardley vs. Gorman for the British heavyweight title is underway

McCormack moves to 4-0 with Andino win

Pat McCormack moves to 4-0 after a six round shutout win over Christian Nicols Andino.

While McCormack failed to make it four consecutive stoppage wins, this fight has provided some useful experiences including going the distance for the first time in his professional career.

Referee Reece Carter scored the fight 60-54 in McCormack's favour after the final bell.