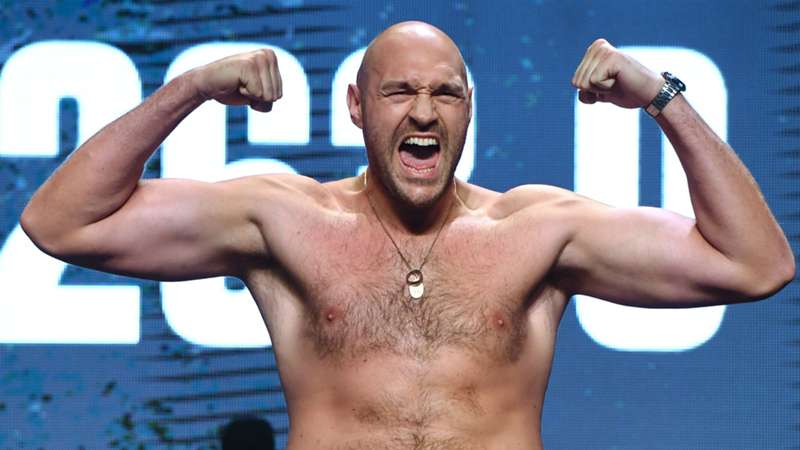 Tyson Fury responded to Anthony Joshua's claim he will knock his head off his shoulders about as well as one would expect.

Tyson Fury branded Anthony Joshua's recent words as "sticks and stones" as momentum builds towards their expected showdown later in 2021.

Current WBC champion Fury agreed in principle to meet WBA, WBO and IBF titleholder Joshua last year, and now the two appear to have dealt with obligations to Deontay Wilder and Kubrat Pulev (in two very different ways), they are widely expected to be one another's very next opponent when the COVID-19 pandemic allows.

Joshua didn't make a very convincing case in his calling out of Fury following a strong showing in finishing Pulev after nine rounds on Dec. 12, but soon amended his focus on "less talk, more action" and made a more assertive statement intent, threatening to "knock Fury's head off his shoulders".

In an interview with Fox Miami, transcribed by Sky Sports, Fury laughed the statement off.

"It's a nice quote," Fury said. "It doesn't mean anything. It's sticks and stones.

"People say a lot of stuff and they don't back it up, so we'll see. I've never seen him take anybody's head off anybody's shoulders in all of his 22 fights. Probably a lie. Another lie."

"We'll see if he's got the guts to try and do it when I'm stood in the ring in front of him. I don't believe he has."

The fight, which could provide the first undisputed heavyweight champion since Lennox Lewis achieved the feat over 20 years ago if politics do not get in the way, is set to be the biggest fight of 2021 — especially if it is able to find a venue that will be permitted to welcome a five-figure crowd.

"This fight has been brewing for a long time," continued Fury. "They have been avoiding me for a long time and now it's finally got to happen. They either run away from the fight and announce it publicly, or take the fight. Either way it's a lose-lose situation for him.

"I don't think he's as good as people crack him up to be, or he doesn't believe he is, in his own self. He's got a confidence issue. He's coming off two shaky performances.

"Boxing is all about who is in form and who isn't. On his last two fights he's not in form, on mine I am. Momentum is with me and I just believe I take him out early, very early. Maybe even one round, two rounds."

Fury's last fight was back in February when he stopped Wilder in the seventh round to claim the WBC belt. They were contractually obligated to face off for a third time — their first fight ended in a draw — but promoter Bob Arum claimed Wilder's rematch clause expired in October. "The Bronze Bomber" is currently exploring his options as far as taking the matter further.