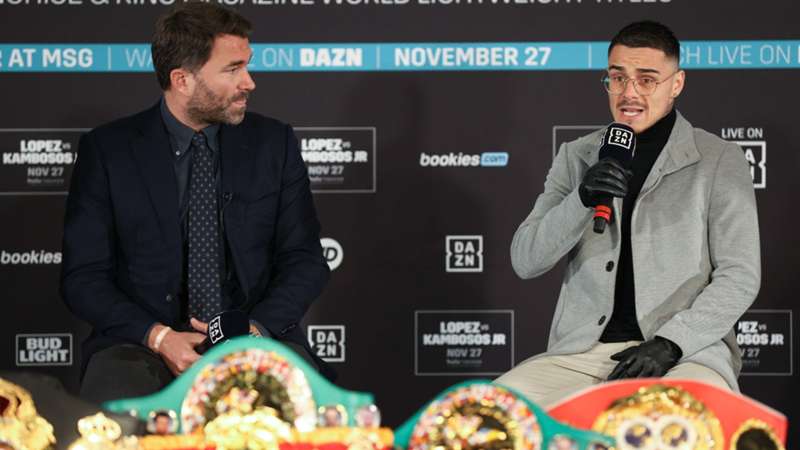 Watch Lopez vs. Kambosos on DAZN (Except China)

The IBF challenger wants all the belts.

George Kambosos hopes to turn this weekend’s fight with Teofimo Lopez into an undisputed clash with Devin Haney in the near future.

Lopez and Kambosos fight on Saturday night in New York on DAZN , with Lopez’s IBF, WBA and WBO belts on the line.

The Australian is Lopez’s IBF mandatory and after months of delays due to coronavirus and logistical problems, the fight is set to finally take place.

Speaking to The Sun , Kambosos said he hopes that Haney defeats JoJo Diaz to allow them to fight some time down the line.

"Me and Haney have been talking as well. We’ve been chatting, we have that mutual respect for each other and I’m in his corner to win his fight, I’m hoping he wins his fight," Kambosos said.

“And he’s in my corner to win my fight, and you know what? We’re going to handle business and get it on. Whatever agreement the world thinks him and Lopez has, it’s not true. What makes more sense? And I know Eddie [Hearn, Haney’s promoter] loves them big stadium fights, so it makes perfect sense."

Kambosos suggested that an undisputed fight with Haney would be a bigger draw than an event wit the the two current champions.

“I’m just focused, I’m not worried about any of that. I know that when I win all the belts, I’ll stand on top. I’ll be the emperor, they say the ‘four kings’ - the emperor outweighs everything, he’s the guy that’s gone to different nations and that’s what I’ve been doing.

“I’ve been in the US, I beat their guys, I went to the UK and beat their top guy, I’ve gone all overseas and now I’m here to beat the top guy in the US. For me, this is just business. I know there’s obviously been a lot of bad blood, he’s angry, which is great. I’m just super focused, cool, calm and collected. Whatever anger he wants to bring to the fight, beautiful, bring it."