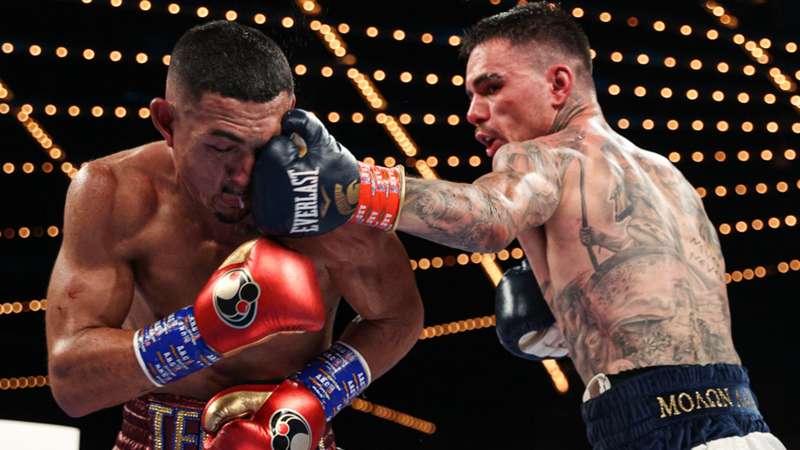 This should have been a routine title defence for Lopez against his IBF mandatory, but what transpired under the bright lights of New York not only stunned the pro-Teo crowd inside the building, but also shook the boxing world.

After 12 brutal rounds, a split decision went in the Australian’s favour and saw him produce a victory which many thought wasn’t possible besides those inside his camp.

In the build-up to the fight, both men promised a ‘war’ and from the first bell to the last, that is exactly what transpired.

Lopez came out flying with a right hook within the first five seconds, but Kambosos Jr. wasn’t fazed. The 28-year-old looked to gain the American’s respect by establishing the jab early on and it played into his hands by following these shots up with an overhand right which knocked Lopez down with 15 seconds remaining in the first.

This first round knockdown sent Lopez’s corner into a state of confusion with his father turned trainer telling his son to ‘Finish him [Kambosos Jr.] already’ one second, and then instructing one of the world’s best pound-for-pound fighters to stay calm.

An auditorium which was chanting ‘Teo, Teo, Teo’ relentlessly throughout the opening round now sat in silence as they realised Kambosos Jr. had not come to pick up his loser’s cheque.

As the fight progressed it was clear Lopez was neglecting one element of his game plan which played an instrumental part in his win against Vasiliy Lomachenko, working the body. The American got too engulfed in his predictions that he would knock Kambosos Jr. out and as a result failed to weaken the Australian in an attempt to open up avenues for a finishing blow.

Kambosos Jr. also made sure throughout the fight that he wouldn’t give Lopez anytime to put together any meaningful combinations by landing scoring punches in between his opponent’s shots, therefore disrupting Lopez’s rhythm and never allowing him to settle.

Before and after the fight the Lopez's camp spoke about how the 135lb weight limit was proving a problem and against Kambosos Jr. it showed. While the Australian was full of energy when jumping onto his stool or taunting Lopez at the end of each round, the 24-year-old American looked a shadow of the enigmatic personality he portrayed during fight week.

Kambosos Jr. was knocked down by a Lopez right hand in the tenth, but Lopez’s offensive approach in the closing stages had come too little, too late. The Australian had done enough throughout the middle rounds to ensure he would be leaving New York with three lightweight world title belts.

Despite the claims from the former world champion that he won the fight 10-2, there was a universal agreement that Kambosos Jr. deserved the two 115-112 scorecards from the judges.

Kambosos Jr. made it clear from the opening bell that he would be willing to mix it up with Lopez and his knockdown in the first round set the tone for a hard-hitting contest which saw both men covered in blood by the end, and despite flashes of the Lopez which fans became accustomed to in his 16 fights prior, he never managed to match his Australian foe in energy who disrupted his rhythm and, in the end, produced arguably the biggest win in his nation's boxing history.