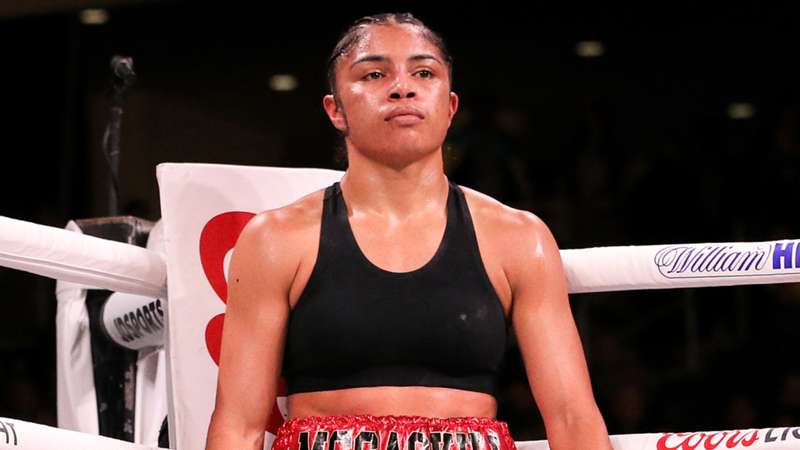 When Eddie Hearn announced a mini-tournament to decide who the best women's fighter in the world was, many overlooked the inclusion of Jessica McCaskill. And that's totally fine with McCaskill.

When Eddie Hearn originally put together mini-tournament that he said would determine the best pound-for-pound women’s boxer in the world, many zoomed in on the names Cecilia Brækhus, Katie Taylor and Amanda Serrano (who would later be swapped out with Delfine Persoon). But one name had been seemingly overlooked in the conversation, Brækhus’ Aug. 15 opponent, unified super lightweight champion Jessica McCaskill (8-2, 3 KOs).

The 35-year-old will move up in weight to challenge the undisputed welterweight champion in the main event of Matchroom Boxing’s return to the United States live and exclusively on DAZN. But being overlooked and an underdog is a part of what makes the part-time investment banker who she is.

“I’ve always been overlooked,” McCaskill tells DAZN ahead of her clash with Brækhus (36-0, 9 KOs) in Tulsa, Okla. “Ever since back when I was a kid and surrounded by a bunch of boys, I wanted to play the sports they were playing. I had to prove myself by on the basketball court by stealing the ball and making shots.

“Being overlooked has never been a source of motivation because I motivate myself. I don’t need anybody to gas me up to succeed.”

Boxing 𝙃𝙄𝙎𝙏𝙊𝙍𝙔 is on the line this Saturday in the streets of Tulsa. 🥊 pic.twitter.com/mhGYdytpQC

Although McCaskill only has 10 pro fights on her resume, she’s already a world champion. Her two losses came by way of a controversial split decision in her second pro fight and a unanimous decision loss to Katie Taylor back in December 2017. Since then, McCaskill has reeled off three consecutive victories and looks to hand Braekhus her first loss as a professional.

She’d be a fool to not recognize the monumental task at hand as Brækhus has never seen a scorecard not in her favor over the course of her boxing career. But she’s also not going to get herself worked up over her opponent. As a matter of fact, McCaskill has made it a point not to watch tape of her opponent.

And that’s for good reason.

“I don’t watch tape,” she says while stating that being trained to make adjustments midway through the fight is the most important aspect of boxing. “If I pick up on something on tape, then whatever they did on that tape is now stuck in my head. Now I’m waiting for her to do something that she may or may not do.”

If Braekhus is studying tape of her loss to Taylor, McCaskill says that she will be in for a rude awakening come Saturday night.

“There’s always something to learn, and you have to see yourself grow when competing at a high level,” she says of what she learned in her loss to Taylor. “If I’m not changing then I’m not learning or putting in the right kind of work. But I’m not the same fighter I was.”

McCaskill will be playing spoiler in Tulsa and aims to prove that she’s deserving of being recognized as one of the best of the world.

“If I win I’m setting myself up for some really big plans coming after this,” she says. “Winning this won’t satisfy me. I will want bigger and better coming after this. This is just one challenge, and if I get past this, I’m going to need something that’s really going to challenge me.

“I’m setting myself up for a little more work in the future.”