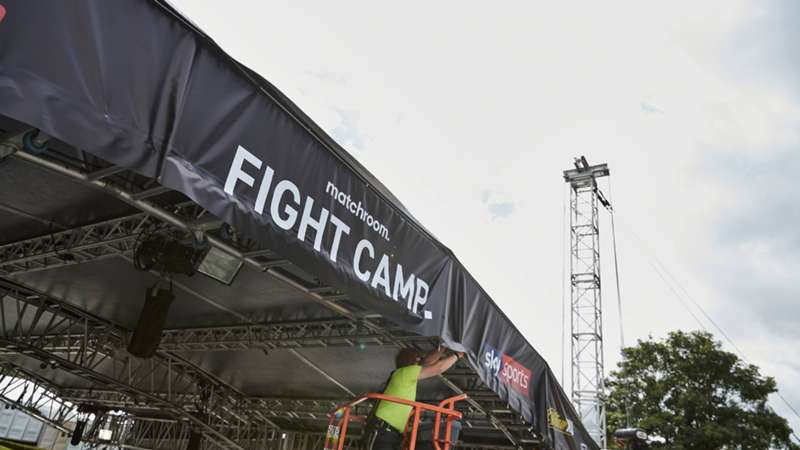 Matchroom Boxing's unique back garden festival of boxing begins on Saturday with a card headlined by Sam Eggington vs Ted Cheeseman. And Eddie Hearn has had to change a lot more than location to make it happen.

Splashed across one of the walls inside the makeshift studio at Matchroom Boxing's HQ is the phrase "First Rule Of Fight Camp: No Easy Fights."

And indeed, Eddie Hearn and his team have expedited their usual plans for their prospects' career paths. Their four-weekend Fight Camp return to live action throughout August will host a lot of domestic dust-ups most promoters would ideally hold off for another several fights, or until a major championship is up for grabs.

Introducing the inaugural pre-fight night press conference from inside the Fight Camp bubble, Hearn himself admitted they have had to change and evolve in order to return to the position of providing live action.

The scenario we all find ourselves in due to the COVID-19 pandemic certainly brings a fair few obstacles, particularly in the realm of spectactor sports.

Nonetheless, there are also a fair few benefits to come when things resume for Matchroom on Saturday in their literal back garden.

Providing analysis between the press conferences on Thursday was Darren Barker, former world middleweight champion and one of Matchroom's all-time favourite clients.

No stranger to doing battle with his compatriots, Barker noted: "Some of these domestic pairings between promising Brits will probably happen sooner than they would have before lockdown. I think that will become more normal."

When sports trivia quizzes 10 to 15 years from now pose the question, "Which two boxers contested the first ever post-pandemic back garden contest?", the answer will be Reece Bellotti and Jordan Gill.

All fighters are residing inside the fully tested and constantly cleaned bubble this week, in a Big Brother-meets-The Contender scenario.

"I brought Mario Kart to kill some time," said Bellotti, in a comment which had the presenters wondering aloud why they also didn't bring a Nintendo Switch with them. "It’s all a bit mad, but we’re having a laugh."

This will be Bellotti's and Gill's first fight of the calendar year, something which would no doubt have not been the case if not for COVID-19.

"A lot of people expect me to bring the power," continued Bellotti, "but I know Gill can hit hard.

"Just because his record doesn’t show a lot of power doesn’t mean he can’t hit hard."

Gill was equally respectful of his next foe, adding: "Everything’s on the line for us both, and it’s what it makes it so important and so interesting for everyone involved.

The retired Barker, meanwhile, couldn't think of a better way for this unique pugilistic experiment to begin.

"Both fighters are desperately eager to get back up the rankings and build some momentum," he explained after the combatants posed for socially-distant "face-to-face" photos.

"Styles make fights, and this one has all the ingredients to make a fantastic contest. This fight to kick start it all will be spectacular."