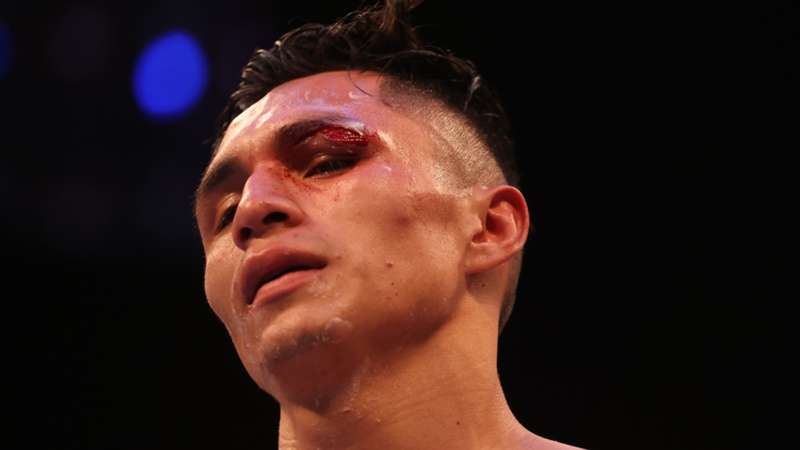 LEEDS, ENGLAND - Josh Warrington’s dreams of revenge against Mauricio Lara were ended at the end of round two after an accidental clash of heads meant the Mexican couldn’t continue. As four rounds were not completed, the bout was scored a technical draw from Emerald Headingley Stadium.

"The cut was absolutely horrendous," Warrington promoter Eddie Hearn said to DAZN on the post-fight show. "You could tell Lara was looking for a way to keep fighting, but the doctor determined that the cut was from the beginning of the eyelid to the end. I wanted to see more rounds, but unfortunately, something like that had never happened to me before. It was shaping up to be a great fight."

Warrington had made an impressive start and enjoyed a solid opening session as he displayed a solid work rate to take the first round. In round two, Lara’s power was evident as he landed a number of heavy shots, but a clash of heads halfway through the round was the fight’s key moment.

#LaraWarrington2 was fun while it lasted 🥊

Lara was inspected by the ringside doctor before the third round, and it was decided he couldn’t continue. Both fighters looked devastated at the unsatisfactory ending, but it ensures the rivalry stays alive as a new date will likely be sought for a third fight to take place.

"Warrington looked very comfortable, fresh in body, fresh in mind, and I really think he could have won the fight today, but now we don't know," Hearn said. "What we do know is that he has a great future in front of him. Now we'll see how long it takes Mauricio Lara to heal. I want Josh Warrington back in the ring as soon as possible. He's fresh. It was two rounds, I don't know when that will be, but that cut will take months to heal. Lara will take six months, but I want to see Josh in the ring if possible and make that third fight early next year."

Here is a full recap of Mauricio Lara vs. Josh Warrington 2.

Lara vs. Warrington ends before round three due to clash of heads

facebook twitter whatsapp
Lara has suffered eye damage following an accidental butt from Warrington. The fight is called off by the ringside doctor and we have a technical draw as four rounds were not completed.

Lara vs. Warrington; Round Two

A better round for Lara. The Mexican was aggressive for the full three minutes, and a few landed shots brought gasps from the anxious Leeds crowd. Warrington has been warned about the use of his head. 10-9 Lara.

Lara vs. Warrington; Round One

A Josh Warrington round on workrate as he makes a busy start. Lara has hurtful intentions with every punch, and Warrington is quick to hold whenever the Mexican gets close. The Leeds man will be satisfied with his start. 10-9 Warrington.

Katie Taylor went the distance once more as she sensibly boxed her way to a points decision win over Jennifer Han. The Irish star was in control throughout as she went through her vast repertoire of skills that included scoring a knockdown in round number eight. Final scorecards read 100-89 from all three judges.

The recently delayed clash between Conor Benn and Adrian Granados finally went ahead, and there was a slight absence of the fireworks that were promised from both men. Benn did try his hardest to force the action, but Granados continually spoiled his work. Finally, both fighters decided to showboat in the final seconds before Benn was given the nod with scores of 100-90, 99-91, and 97-93.

Maxi Hughes' incredible story goes on. In the form of his life, Hughes upset the odds to outclass Jovanni Straffon over 12 rounds. Many thought the Mexican's power would be a key factor, but Hughes looked the more powerful out of the pair as he came so close to forcing a stoppage in round five. Straffon toughed it out, but he was well beaten at the final bell by scores of 120-107 x 2, and 119-109.

WHAT A WIN FOR @BOXERMAXIHUGHES!!!#AndTheNew IBO World Lightweight Champion 👏

Ebanie Bridges was too busy and aggressive for Mailys Gangloff as she registered a well-deserved points win after eight tough rounds. Bridges walked forward at all times, and she wasn't afraid to let her hands go as she landed with a number of eye-catching shots. Referee Steve Gray rewarded Bridges' industry with a 77-76 scorecard.

Ebanie Bridges gets the win 🥊 pic.twitter.com/T7aOyeLR6I

Hopey Price was in electric form as he blitzed Zahid Hussain in two rounds. Hussain was down at the end of round one and was saved by the bell, but there was nothing he could do to stop the onslaught from Price in round two. After being dropped again, a barrage of punches from Price ended the fight as the third man sensibly intervened.