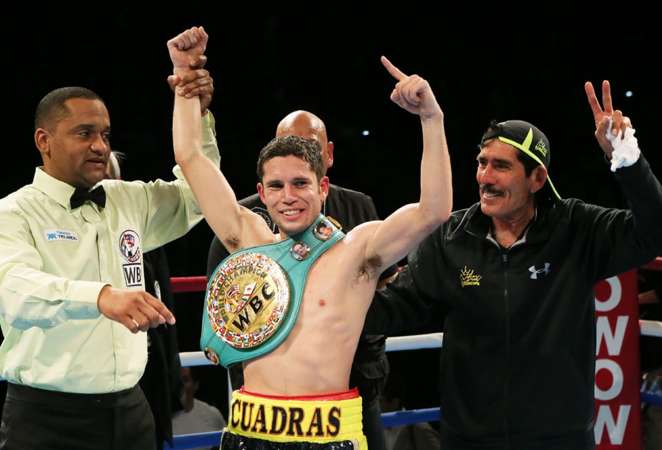 The Mexican will face Jesse Rodriguez for the vacant title this Saturday after Srinsaket Sor Rungvisai pulled out of the fight due to illness.

After spending four months preparing to face Thailand's Srinsaket Sor Rungvisai, Carlos Cuadras has had to change his entire strategy at the drop of a hat.

Rungvisai announced on Sunday that he would not be able to fight after picking up a non-COVID 19 related illness and as a result there was a frantic search for an opponent to face Cuadras for the vacant WBC super flyweight title.

"At first the news came as a surprise, many times the fight was rescheduled and we were afraid that they would cancel it again, but when they told me that the opponent would be Jesse Rodriguez I came back. I want the belt and I don't care who the opponent is," said Cuadras during the WBC's weekly press conference.

Cuadras and his team had trained for months at the Otomi Ceremonial Centre, in Estado de Mexico, and now they have to prepare for Jesse Rodriguez, who has a record of 14-0 (10 KOs) and will move up a division for Saturday night's fight.

"Here is where we will have to take out all our fangs, the experience we have and above all manage the pace of the fight, Carlos is a fighter who has a lot of canvas and has a lot of maturity. We don't like to think that we have an advantage going into this fight, on the contrary we don't underestimate our opponent. We know it will be a war because he won't sell his undefeated record cheap," added Cuadras' trainer Manuel Lopez during an interview with DAZN News.

Cuadras will come into the fight with a 39-4-1 (27 KOs) record and the Mexican only has one thing on his mind, and that's to become a two-time world champion.

"With the hunger I have to be champion again I could go to a buffet. I feel that these are tests that life gives me, but the truth is that I am firm. I am well prepared. I have to be smart, make him fall into my nets and then slaughter him. I'm going to give him the whole morning to send him to the canvas."