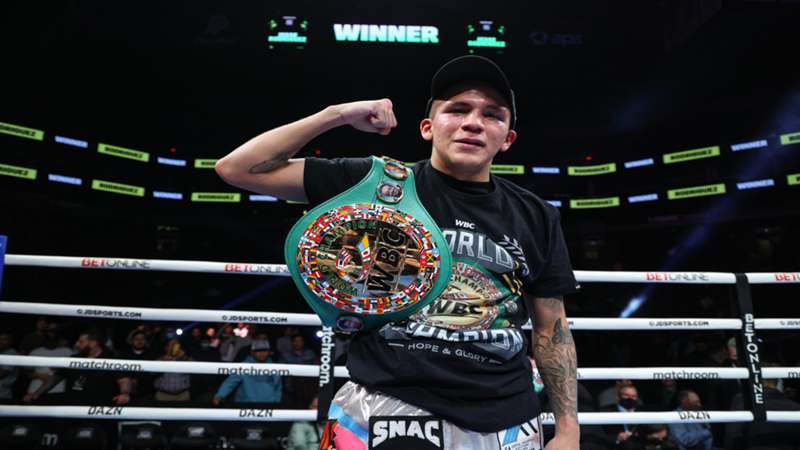 Seven days ago, Jesse Rodriguez was preparing to take on Fernando Diaz in a flyweight bout.

A non-COVID illness to Sriskat Sor Rungvisai and a quick acceptance to face Carlos Cuadras at the beginning of this week was what the doctor ordered for Jesse Rodriguez even though he'd have to jump up two weight classes. The weight discrepancy made no difference to "Bam" as he knocked down Cuadras and used his speed and footwork to beat Cuadras by unanimous decision (117-110, 117-110, 115-112) to win the vacant WBC super flyweight title at the Footprint Center in Phoenix. DAZN News scored it 116-111 for Rodriguez.

There is a new star in boxing ✨

The opening two rounds belonged to Cuadras (39-5-1, 27 KOs). He was throwing in bunches, going to the body in an effort to impose his will on the smaller Rodriguez. However, Rodriguez had different plans in mind in the third round. Rodriguez flicked a jab, slid, and planted a picture-perfect right uppercut to send Cuadras to the canvas.

From there, it was all Rodriguez (15-0, 10 KOs). His speed was too much. His footwork was superb, allowing him to throw from unique angles. Those factors permitted Rodriguez to continuously walk Cuadras down and control the action to become the youngest world champion right now in boxing at the age of 22.

Here is what happened at Jesse Rodriguez vs. Carlos Cuadras.

There is a new star in boxing ✨

facebook twitter whatsapp
Left-hand scores for Rodriguez. Cuadras continues to pound the body. A four-punch combo from Cuadras as he has to feel some desperation with time winding down in the fight. More good body work by Cuadras but Rodriguez with a body shot of his own. We enter the final round, and Cuadras needs a stoppage to win. (10-9 Rodriguez, 106-102 Rodriguez)

facebook twitter whatsapp
Stinging left from Rodriguez as he follows it up with a beautiful uppercut. Another four-punch combination by Rodriguez. Hard shot to the body by Cuadras. Sneaky left uppercut lifts Rodriguez up. Three-punch combo from Rodriguez. Intelligent game plan as Rodriguez keeps using angles, superb footwork to keep himself away from Cuadras' power. Two right hands score for Cuadras but too little, too late. (10-9 Rodriguez, 96-93 Rodriguez)

Cuadras starts the eighth like he did the seventh by dictating the pace. He's throwing combinations, landing the harder shots. A right hand from Cuadras. A combination from Rodriguez. Needs a few more of those. Hard lefts exchanged—strong shots to the body by Cuadras. Overhand right from Cuadras and an overhand left from Rodriguez to close the round. Cuadras is back in the fight. (10-9 Cuadras, 76-75 Rodriguez)

facebook twitter whatsapp
Cuadras is clicking this round. Right hands are finding a home. Rodriguez isn't showing much as Cuadras is throwing in volume, punctuated with a right uppercut to snap Rodriguez's head back. Cuadras continues to throw, throw and throw in an attempt to wear the smaller man down. (10-9 Cuadras, 67-65 Rodriguez)

facebook twitter whatsapp
A left-right to the sternum from Rodriguez, which I felt from my home. Straight left snaps Cuadras' head back. Sharp counter right from Cuadras. Right, left snaps Rodriguez's head back in return. (10-9 Rodriguez, 58-55 Rodriguez)

facebook twitter whatsapp
Uppercut and then a left hook snaps Cuadras' head back. Left uppercut lands for Rodriguez. Digging left to the body that bends Cuadras for a quick moment. Uppercut splitting the guard for Cuadras. (10-9 Rodriguez, 48-46 Rodriguez)

facebook twitter whatsapp
Good body shot that hurt Cuadras. Rodriguez is making the body a point of emphasis. Rodriguez is being the aggressor and is the boss in the ring. He's walking Cuadras down and firing jabs at will. One-two from Rodriguez. He's in a rhythm. A flush overhand left connects for Rodriguez. (10-9 Rodriguez, 38-37 Rodriguez)

facebook twitter whatsapp
After an exchange, Rodriguez lands a hard right to the body. Rodriguez sees an opening. He slides over and uncorks a beautiful right uppercut sends Cuadras to the canvas. Three-punch combination from Rodriguez. Hard left to the body which makes Cuadras wince. Looping left lands for Cuadras. Blood coming from the nose of Rodriguez. (10-8 Rodriguez, 28-28)

facebook twitter whatsapp
Cuadras coming out fast with jabs to the body. Multiple body shots by Cuadras. I can see what the game plan is going to be. Stiff jab and right hand down the middle for Rodriguez. Four-punch combination from Cuadras, but Rodriguez comes back with a body shot. One-two from Cuadras, but Rodriguez fires a left. Solid action to kick things off. (10-9 Cuadras)

facebook twitter whatsapp
It's time for the main event as Carlos Cuadras (39-4-1 27 KOs) and Jesse Rodriguez (14-0, 10 KOs) meet for the vacant WBC super flyweight title. At the beginning of the week, Rodriguez got the call to replace former champion Srisaket Sor Rungvisai. The 22-year-old brings a six-fight knockout streak heading into the most important fight of his career.

Mitchell def. Skelly via knockout at 1:32 of the fourth round to retain the WBA women's bantamweight title.

After two knockdowns in the opening two rounds, Mitchell sent Skelly packing in the fourth. Everything started when Mitchell connected on a left hook that stunned Skelly. Mitchell saw the opening and closed the show. A left hook, two right hands kicked things off, which sent Skelly staggering to the ropes. Mitchell uncorked a series of power shots, and thankfully the referee jumped in to stop the beating.

Mitchell showed she's levels above Skelly. What a sensational performance from Mitchell. I want to see more of her in the near future.

Like the first round, Mitchell nearly closed the show at the end of the second as a left hook, and another right hook sent Skelly to the mat. Skelly looked out on her feet as she dropped to the canvas. But then, she made it up and looked out of it. Somehow the referee is letting her continue.

Her corner told Skelly that they would stop it if she didn't show something in the third.

Down goes Skelly at the bell

facebook twitter whatsapp
The end of the first round was about to come to a close. Mitchell unloaded a combination, and a right hook sent Skelly to the canvas as the bell sounded. Skelly made it back to her feet and looked to be ok.

Massive round for Mitchell. Can she put Skelly away?

What were the two judges scoring for Ford looking at? They must have been sleeping, nodding off, or looking at their cell phones.

Yes, Ford came on in the last three rounds, but the previous seven were all Vasquez. He was the aggressor, inside Ford's space, landing the harder shots. You could see the relief on Ford's face as he knows he received a gift from the gods.

Ford surging heading into final round

facebook twitter whatsapp
Vasquez had a big lead entering the eighth round. Finally, Ford started showing urgency, going with the jab, right hooks, uppercuts, and not letting Vasquez get inside. Comes down to the final round.