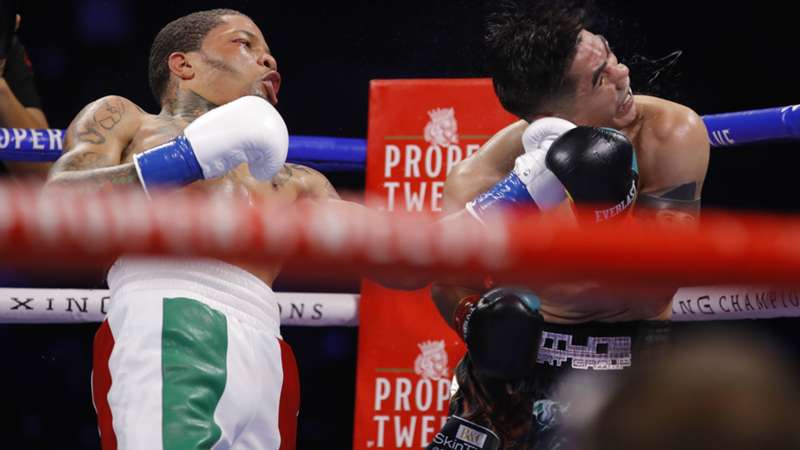 With the victory, Davis takes home the WBA junior lightweight championship and becomes a bona fide pay-per-view force. And he did it with an instant Knockout of the Year frontrunner.

In his pay-per-view debut Saturday night, Davis winded up and unleashed a scintillating left uppercut that knocked Leo Santa Cruz out cold for a sensational sixth-round KO and instant Knockout of the Year frontrunner. The punctuated victory before just north of 9,000 fans spread out at the Alamodome in San Antonio gave "Tank" the WBA super featherweight title to add to his existing WBA lightweight title.

Just like that, Davis earned his biggest victory yet and more than delivered in his first pay-per-view, as he laid the groundwork to become a superstar cash king of the sweet science for many years to come. After the bout, the 25-year-old Davis (24-0, 23 KOs) didn't mince words when critiquing the uppercut he launched to end the show early.

“He was right there for it," Davis said on Showtime about the dynamite uppercut that blasted Santa Cruz on the chin and knocked him out instantly. "He punches, but he doesn’t try to get out of the way. There was nowhere for him to go on that knockout because I got him into the corner."

Davis added: “I’m a pay-per-view star. Everybody knows I’m number one and I showed it tonight. I’m going to continue to show people all over the world that I’m the best. I don’t have to call anybody else out. I’m the top dog. Just line them up and I’ll knock them out.”

While Davis being the definitive "top dog" is still arguable, he certainly made his case as the best in his division and possibly beyond Saturday night. From the opening bell, Davis grinded and launched that left uppercut, with the shot landing on some attempts and just missing on others. When he wasn't launching that punch, he was working Santa Cruz's body with power shots. The first round had Santa Cruz pushing Davis to the ground in a gesture that Davis returned in the second, throwing all their mutual respect out of the window.

As the bout continued, the two champions took turns trading fire in electric sequences. However, every time Santa Cruz engaged in the phone booth, he left himself vulnerable. The strategy blew up in Santa Cruz's face in the sixth when Davis cornered him against the ropes, downloaded information in real-time and detonated that wicked left uppercut, which crumpled the Mexican fighter in a heap. Santa Cruz laid motionless, flat on his back for several tense seconds, before he slowly got up off the mat.

Already a star, Davis might have just launched himself into superstardom on the pay-per-view front.

Scary scene as Santa Cruz is motionless in the ring

Unbelievable knockout from Davis. Santa Cruz is flat on his back. He appears to be talking back and is alert now.

He's slowly getting up off the mat.

Davis knocks Santa Cruz out cold in sixth with a scintillating uppercut!!

But WHOA!!!! Davis winds up and detonates a left uppercut that knocks Santa Cruz out cold!! Can you say KO of the year? Davis just sent Santa Cruz into orbit!

facebook twitter whatsapp
Davis with a left hook that lands flush. He just misses with a counter left uppercut. Santa Cruz pushes forward. Now, Davis pushes Santa Cruz to the ground! All the mutual respect they had has been thrown out the window. Now, Santa Cruz unloading on Davis, although "Tank" rolled with some of those punches. Still, Davis comes right back with the uppercut and takes this round, too. (10-9 Davis, 20-18 Davis)

facebook twitter whatsapp
Counter left uppercut from Davis grabs Santa Cruz' attention. Santa Cruz trying to stay disciplined with his jab, sticking the punch out there. Santa Cruz now with a flurry. Davis winding up with an uppercut and has already drawn blood. Santa Cruz returns fire with a right. But right now, this is Davis' style. Davis digs into the body  and Santa Cruz counters with a quick flurry. He pushes Davis to the ground to the roar of the crowd. It's ruled a push and the round ends seconds later. Action-packed first round. (10-9 Davis)

"Tank" also rocking a robe with the colors of the Mexican flag.

Davis with shades of his promoter, Mayweather, who rocked a sombrero and Mexican flag robe for his ring walk against Oscar De La Hoya back on May 5, 2007.

Santa Cruz is making his ring walk to the roar of the Alamodome crowd of just north of 9,000 fans. His father/trainer, who has had to overcome near-death experiences due to cancer and COVID-19, is by his side.

Main event time. @leosantacruz2 makes his way to the ring.

Remember, this is Davis' and Santa Cruz's pay-per-view debut

facebook twitter whatsapp
The winner will not only bank two titles, but open the floodgates to headline more lucrative PPVs in the near future. A little over 9,000 fans are spread out through the Alamodome to witness what should be a memorable bout.

The Gervonta Davis-Leo Santa Cruz main event is next!

facebook twitter whatsapp
It has been three fights, three knockouts so far in this pay-per-view. What will Davis vs. Santa Cruz have in store? Two titles on the line, with the winner taking all.

Barrios tells his corner that Karl's punches are getting weaker. That's definitely due to the body attack that Barrios has put on the challenger. Barrios unloading early here and now drops Karl with a big right hand. Karl is up and beats the count, but Barrios goes right back on the attack and is throwing a barrage of punches. But Karl comes right back with a big right hand. Barrios comes back and buckles Karl with a left hook. Karl, even on shaky legs, lands another big right. But a clash of heads has opened up an ugly gash over Karl's right eye. The ringside doctor checks on it and they continue. Barrios is mashing the pedal and throwing heavy punches and Karl is trying to fight back.

But Barrios drops Karl, who falls face first, before rolling flat on his back. He's knocked out! Barrios defends his title to the delight of the San Antonio fans in attendance.

Despite Barrios dominating behind his bodywork, one can't help but feel bad for Karl, as the inadvertent headbutt caused the gash during the same round that he was somehow finding a way to fight back. Still, a dominating performance from Barrios.

facebook twitter whatsapp
Barrios has slowed Karl's pressure significantly and he could thank his bodywork for that. Still, Karl is trying to be scrappy and piece punches together. Barrios keeps pounding the body, before landing a lead left hook as well. A sweeping left hook lands as well and then an overhand right, too. (10-9 Barrios, 48-47 Barrios)

.@floydmayweather with his champ @gervontaa before the biggest fight of his career.

facebook twitter whatsapp
Sweeping left hook lands for Barrios, who adds in a right hand as well. Now, Barrios is walking down Karl and unloading with left hooks. The champ is turning things up a notch here and Karl is thinking about pressing forward a bit because of it. Barrios lands a right and it looks like he briefly buckles Karl's knees with a body shot, too. Moments later, Barrios adds a nice uppercut for good measure. A stiff jab from Barrios stuns Karl and then the champ goes right back to the body. Barrios connects on two right hands to end the round. A great fourth frame from the champ. (10-9 Barrios, 38-38)

facebook twitter whatsapp
Karl lands a straight right flush, but Barrios returns fire with a lead left. Karl lands a right and left, before Barrios again attacks the body. Those body shots are going to take effect. Karl chasing Barrios and connects on a right. Karl's work rate and hunger gives him the third as well. (10-9 Karl, 29-28 Karl)

facebook twitter whatsapp
Barrios working the body with that left hook. But Karl lands two right hands and is moving forward, gaining steam. Karl is getting inside and throwing punches in bunches. However, Barrios clips him with a chopping right hand. Still, Karl moves forward and keeps his work rate high. Barrios working the body well and countering even better. Left hook lands for Karl with under 10 seconds. Karl takes the round, but was slowed by the body work from Barrios. (10-9 Karl, 19-19)

facebook twitter whatsapp
Ryan Karl comes out the busier of the fighters, throwing more punches. But Barrios gives him something to think about with a stiff right hand to the body. Karl felt that, but keeps moving forward. A counter left lands for Barrios and Karl responds with a right. Big left hook clips Karl. Moments later, he sticks the jab, which connects as well. That left hook might have given Barrios the round. (10-9 Barrios)
facebook twitter whatsapp
The co-main event with Mario Barrios defending his WBA (regular) junior welterweight title against Ryan Karl is next
Two fights, two stoppages thus far. Let's see how Barrios-Karl pans out next.

Floyd Mayweather Jr. in the locker room of Gervonta Davis