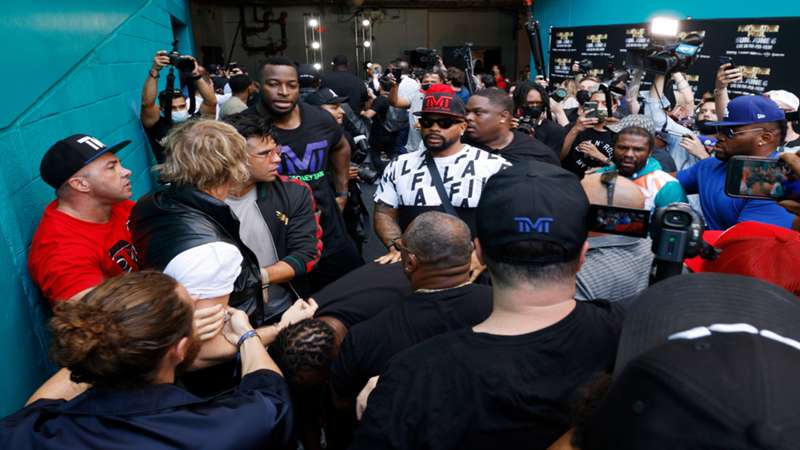 Getty Images
Watch Canelo vs Saunders on DAZN (except Mexico)

The antics continue ahead of Mayweather's exhibition bout with Jake's brother Logan.

This Saturday features what could be the biggest boxing event of the year when Canelo Alvarez and Billy Joe Saunders battle in a three-belt, super-middleweight title unification bout in front of a record-breaking crowd of around 70,000 people at AT&T Stadium in Arlington, Texas.

Whenever there's a massive fight week that doesn't directly involve him, Floyd Mayweather Jr., more often than not, inserts himself into the headlines to attempt to take the shine away. He's at it once again.

After a press conference on Thursday to promote his June 6 exhibition against social media influencer Logan Paul, Mayweather got into a face-to-face confrontation with Paul's younger brother, also a social media star turned boxer, Jake, because the pound-for-pound great boasted he could beat both siblings in the same night. Jake told Mayweather that he would take him up on his offer.

“You want to fight? Let me call Al Haymon and make it happen,” Paul said as he went to nose-to-nose with Mayweather.

“Absolutely. I don’t need Al Haymon,” Mayweather shot back. “I’m my own boss.”

Venom was being spewed both ways when Paul snatched Mayweather's hat off his head and ran off. Instantly, Mayweather ran after Paul. With tensions mounting by the second, security intervened with Paul mocking Mayweather, who was upset at Paul ruining his moment.

“You don’t play with me,” Mayweather screamed as he walked toward Paul before security once again intervened. “Don’t disrespect me. Don’t you ever disrespect me, m—f—.”

Mayweather (50-0, 27 KOs) retired after knocking out Conor McGregor in the 10th round in August 2017. The former five-division champion returned in December 2018, in an exhibition, when he traveled to Japan and stopped kickboxing star Tenshin Nakasuwa in a non-sanctioned contest.

Logan (0-1) had his only professional boxing match in November, losing a narrow split decision to KSI.

Jake (3-0, 3 KOs) last fought on April 17, when he knocked out former UFC fighter Ben Askren in the first round. The 24-year-old has been making waves as of late, challenging former UFC heavyweight and light heavyweight champion Daniel Cormier and current UFC welterweight champion Kamaru Usman.