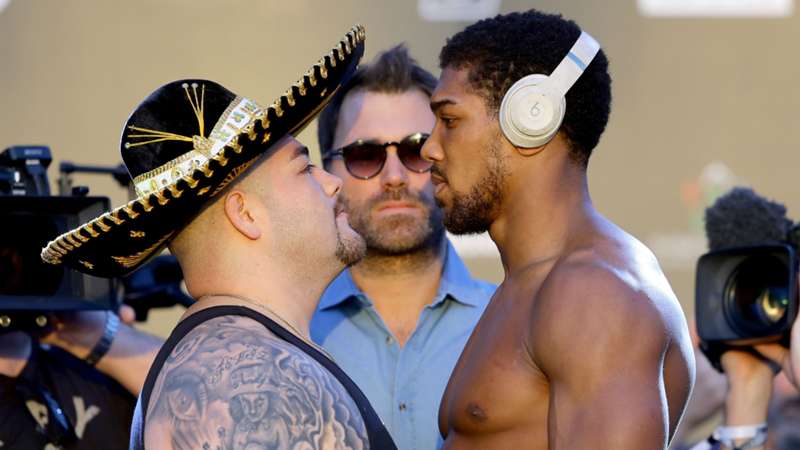 Everything you need to know about how the two heavyweights stack up heading into their Dec. 7 rematch.

Leading up to the rematch between Andy Ruiz Jr. and Anthony Joshua, there has been a lot of talk about how Ruiz has looked slimmer in preparation for his first title defense.

However, Ruiz actually weighs 15 pounds more than he did for the first fight against Joshua back in June.

Ruiz was 283 pounds on the scale at Friday's weigh-in.

Joshua, meanwhile, has looked trimmer, and he came in at 237 pounds for the weigh-in, about 10 pounds lighter than the first fight.

How their respective weights affects the fight remains to be seen, as Ruiz puts his unified world heavyweight titles on the line against Joshua in Diriyah, Saudia Arabia, and live on DAZN, on Saturday, Dec. 7.

Ruiz will be looking to prove that his shocking June 1 seventh-round TKO wasn't a fluke and that he has the British boxer's number in a mismatch of styles. He enters the ring with one blemish on his record — a questionable Dec. 2016 majority decision loss to Joseph Parker.

Meanwhile, Joshua is seeking redemption in the form of exacting revenge and snatching back the WBA, IBF, WBO and IBO titles to become a two-time unified world heavyweight champion. Twenty-one of his 23 pro fights have ended via knockout, and he looks to add Ruiz to that count in what would be his most savory KO.

The winner of this bout still has big things ahead. A potential showdown of the winner between WBC titleholder Deontay Wilder and Tyson Fury for the rights to the undisputed heavyweight crown could be next — although Joshua on Tuesday indicated a possible trilogy fight with Ruiz in the future.

Here's the tale of the tape between Ruiz and Joshua in what could be the fight of the year: