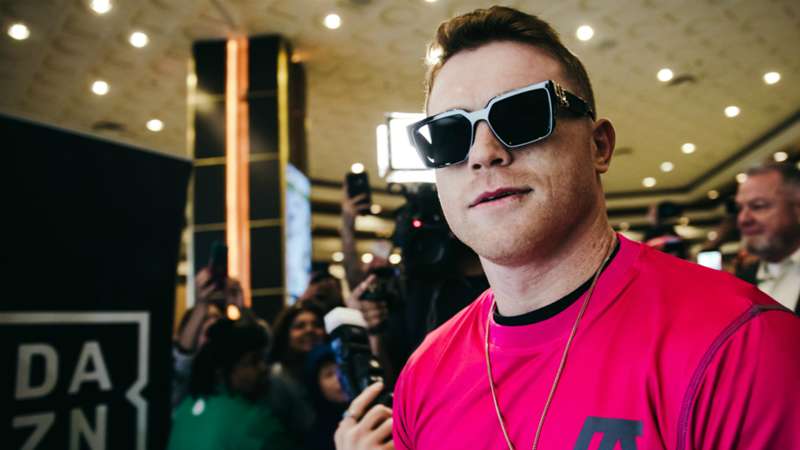 While it seems far-fetched for Alvarez to add another 25 pounds, it isn't out of the realm of possibility.

He has moved up to 175 pounds to battle Sergey Kovalev for the WBO light heavyweight title . The two will square off at the MGM Grand Garden in Las Vegas, streaming live on DAZN .

Alvarez (51-1-2, 35 KOs) started his career in October 2005 as a welterweight. He moved up to junior middleweight in July 2010 and fought exclusively at 154 pounds until November 2015, when he moved up to 160 pounds and defeated Miguel Cotto for the WBC crown.

If Alvarez can beat Kovalev, then he will join "Sugar" Ray Leonard and Thomas Hearns as the only fighters to start their careers at welterweight and win a world title at light heavyweight. Alvarez, however, has higher goals. At Tuesday's grand arrivals for the bout, he told the assembled media that he'd like to one day win a world title as a cruiserweight, which would make him the first fighter to go from 147 pounds to a world championship at 200 pounds.

"It sounds very crazy, but you never know," Alvarez said.

Oleksandr Usyk was the undisputed cruiserweight champion until he vacated his titles to move up to heavyweight. The WBA titlist is Arsen Goulamirian, the IBF belt belongs to Yunier Dorticos, and Mairis Briedis is the WBO titleholder. The WBC belt is vacant, with Ilunga Makabu installed as the No. 1 contender.

While it seems far-fetched for Alvarez, 29, to add another 25 pounds, it isn't out of the realm of possibility: For his preparations against Kovalev, Alvarez brought cruiserweight Ben Alvarez (no relation) to help prepare him for Kovalev's power.

Then again, Canelo needs to get through Kovalev first before people can start dreaming about him possibly making more history.