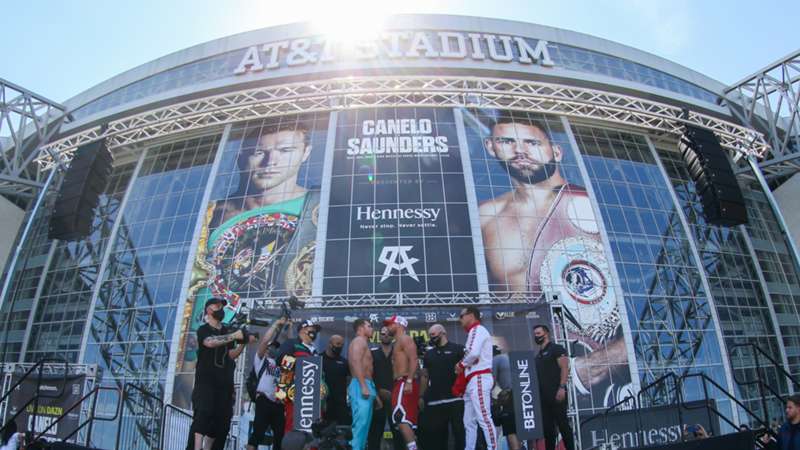 Quotes, videos, features, statistics, trivia and details on how to watch the super-middleweight unification clash live on DAZN.

Only one super-middleweight champion will emerge from the AT&T Stadium in Arlington, Texas after Saturday when Saul 'Canelo' Alvarez puts his WBA, WBC and The Ring titles up against the WBO belt of the undefeated Billy Joe Saunders.

It is time for the sport's global pound-for-pound superstar to 'Face The Fearless'. Can he continue his quest to become undisputed 168lbs champion, or is that instead the destiny of his British adversary?

The fight airs live worldwide on DAZN everywhere except for Mexico, where fight fans can check their local providers for details on how to tune in. In addition, DAZN has been publishing a host of Canelo vs. Saunders content all week to help get you in the mood for the biggest bout of 2021 so far.

Here's a full rundown of the big fight preview.

The DAZN News staff have given their picks for the bout, which you can read here .

Also, a number of big names in the world have boxing have offered their thoughts via interviews and social media, and you can check those out here .

The May 8 clash weaves together a number of great narratives, and DAZN have had a look at the backstory of many of them.

Here you can find:

The final press conference before the fight took place on Thursday . Here's what both men had to say, as well as the full video to re-watch:

Saunders : "I've been boxing all my life, I'm here for a reason, and that's to win!"

At the Friday weigh-in, Saunders stepped on the scale first to loud boos and came in at 167.8 pounds. Alvarez came up next to a thunderous ovation and tipped the scale at 167.4. We have a full report of the procedures here , and you can rewatch the tense weigh-in below.

BetMGM have provided some intriguing markets for punters in the United States, as well as a great deal to earn a DAZN subscription in the process.

Fight fans outside the U.S. who are considering a bet on the big fight, meanwhile, should check out the odds on offer here .

Where can I watch and stream Canelo vs. Saunders?

Canelo vs. Saunders can be seen on DAZN worldwide (except in Mexico) in over 200 countries and territories. That means you can watch the fight on DAZN in the United States, the United Kingdom and pretty much everywhere else. Mexico is the only country where this fight is NOT on DAZN.

If you aren't subscribed to DAZN, you can sign up here .

DAZN is available on web browsers at DAZN.com  and also has apps available for all of the following TV and streaming devices. If you are in Argentina, Chile and Colombia you must download from the Apple App Store or Android Google Play store as opposed to via a web browser.

What time is Canelo vs. Saunders where I live?

The main televised card headlined by Canelo and Saunders begins at the above times in the listed locations. You can also find more local start times on the below infographic. Please note that while the fight date is Saturday May 8 local time in Texas, it will of course be Sunday May 9 in many countries including those in Europe, Asia, Africa and Oceania.

Canelo vs. Saunders entrances by country

Canelo and Saunders are expected to make their ringwalks for the main event approximately three hours after the main card begins. However, as ever with live boxing, the exact start of the headline attraction will depend on how long the undercard runs. You can also find more local start times on the below infographic.

Canelo vs. Saunders records, tale of the tape

A full rundown of each fighter's statistics can be found in this extensive tale of the tape.