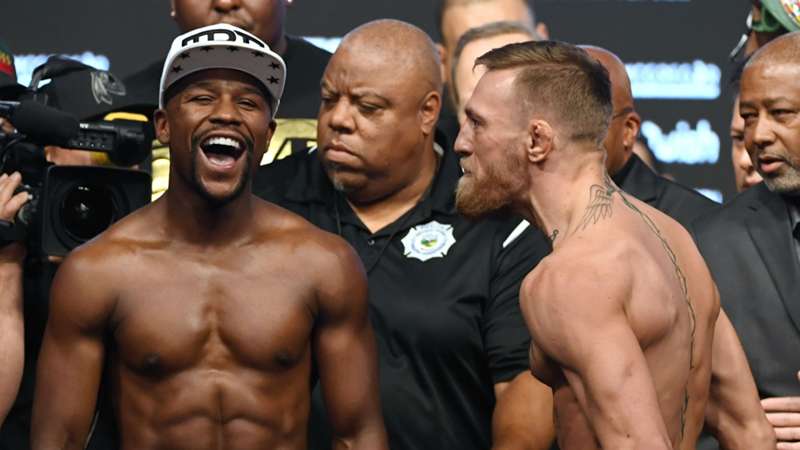 "Notorious" seems confident that he and "Money" will run their mega bout back, but he has other boxing plans just in case it falls through.

Would you be up for seeing a Floyd Mayweather Jr. vs. Conor McGregor rematch in 2020?

McGregor, who returns to the Octagon to face Donald Cerrone on Saturday night in Las Vegas, seems confident that the mega bout will happen.

"I'd like to rematch Floyd," McGregor told ESPN's Ariel Helwani in an interview posted Monday. "I think we should rematch Floyd. He can go and pick someone else. It's not going to be the same.

"I know I'd beat Floyd if we rematched and when we rematch," he continued moments later.

"I look forward to doing it again. It will happen again. It's happening again."

McGregor saying this comes after UFC president Dana White recently struck a handshake deal with Mayweather courtside at an NBA game for the boxing legend's return to the sweet science this year.

"Some things have to play out and then I'm going to start talking to [Al] Haymon maybe this summer and I'll have something for Floyd in the fall," White told ESPN in a separate interview.

Whether those "some things" mean McGregor defeating Cerrone and another fighter during the spring or early summer, so that a rematch would make a bit more sense, remains to be seen.

The original Mayweather-McGregor clash in August 2017 had the Irish fighter doing surprisingly well during the early rounds, before "Money" asserted himself and scored a 10th-round TKO.

Still, McGregor called his performance "phenomenal" when speaking with ESPN and pinpointed the root of his loss.

"The only reason I lost that bout is because I prepared for a back-footed, Philly shell style of opponent, and when the fight was like that I was picking him apart," McGregor offered. "Then, he came forward and started pressing and I wasn't sinking into my shots like I am now with my boxing coaches that are drilling specific boxing things into me again."

While McGregor seems supremely confident that he'll get the Mayweather rematch, he also said he's "very much so" interested in facing Manny Pacquiao in the ring.

"Notorious" also added: "I'd like to box Paulie (Malignaggi). Why not?"

Whoever McGregor winds up getting in the ring, the outspoken fighter made sure to predict that he'll "get a boxing world title" before his fighting career is over and done with.

First, though, he'll have to shake off any possible MMA rust when fighting Cerrone on Saturday night. McGregor (21-4) suffered a fourth-round submission loss to rival Khabib Nurmagomedov his last time out in October 2018 and hasn't won since his second-round TKO of Eddie Alvarez in November 2016.