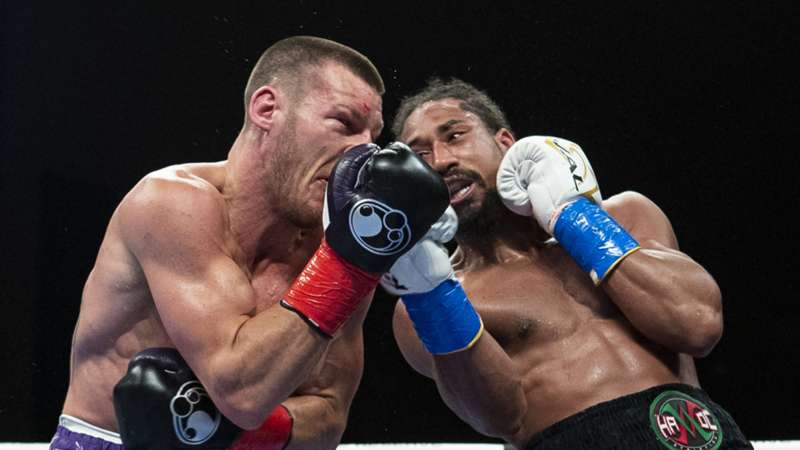 facebook twitter whatsapp
After 12 rounds, judges have it 118-109, 118-109 and 116-111 all in favor of the winner and still undefeated WBO middleweight champion, Demetrius Andrade.

facebook twitter whatsapp
Andrade pops Williams with that left jab and moves out of harms way. He's snapping that jab some more now and elusively moving. The fighters clinch for the third time this round, as the ref breaks them up. Big left hook from Andrade definitely hurt Williams. He clinches and the two fall to the ground. Quick combo from Andrade with about 30 seconds left. Williams trying to pressure, but doesn't have anything left in the tank at this point. The bell rings, as the two embrace. Williams was absolutely relentless, but Andrade was clearly a level above his mandatory challenger. (10-9 Andrade, 117-110 Andrade)

facebook twitter whatsapp
The two touch gloves after some warnings from the ref. Williams closing the gap and making this fight as ugly as he can. Andrade opens up with a flurry and then goes back to moving elusively and swiftly. Excellent ring generalship this fight from the champ. Andrade launches that right uppercut for good measure. He's tired after hitting Williams with everything he has over the course of this fight, but steals this round. (10-9 Andrade, 107-101 Andrade)

facebook twitter whatsapp
Williams has taken plenty of punishment but keeps moving forward. The challenger lands a right to the temple, but the champ retorts with that right uppercut moments later. Andrade's volume has gone down last couple of rounds. That's a credit to Williams leaning on the champ and continuously crowding his space. (10-9 Williams, 97-92 Andrade)

facebook twitter whatsapp
Andrade slowed things down in that last round, but is coming out with a spring in his step this round. Williams has been moving forward for a majority of this fight, but his shots haven't taken Andrade off his program at all. The champ is composed and remains in complete control. Just as that's said, Williams lands a lunging straight right and seems to have hurt Andrade — or at least let the champ know that there's more of this fight to go. Good inside work from Williams. (10-9 Williams, 88-82 Andrade)

facebook twitter whatsapp
Andrade picking and choosing his shots, whether crunching blows to the body or head hunting upstairs. A masterful, savvy boxing clinic being put on by the champ in this fight. (10-9 Andrade, 79-72 Andrade)

facebook twitter whatsapp
Andrade is landing 50 percent of his power punches thus far. He opens this round with some body work. Williams feverishly cutting off the ring, but not doing much inside. Instead, he's being set up by the champion. Now, Williams does land a solid right hand inside. Moments later, that slicing right uppercut lands again for Andrade. Another uppercut — this time followed by a right hand from the champ, who once again has Williams on questionable legs. (10-9 Andrade, 69-63 Andrade)

facebook twitter whatsapp
Andrade is making Williams miss a lot of shots here in the sixth. He catches Williams with a straight left and then detonates a huge right uppercut. Seconds later that right uppercut is unloaded once again. Williams is somehow eating these shots and still standing, but it's a lot of punishment that is taking its toll. (10-9 Andrade, 59-54 Andrade)

Williams showing pressure once again. Andrade makes him think twice by launching a few uppercuts that do damage. Another uppercut follows moments later. Williams doesn't have an answer for the champ's uppercut. Both fighters go down and almost through the ropes after being locked in the clinch. Williams is doing a good job slowing this fight down and making it ugly. But these uppercuts from the champ are razor sharp. (10-9 Andrade, 49-45 Andrade)

facebook twitter whatsapp
Williams is trying to turn this fight into an ugly bout, as he tries to close the gap and crowd Andrade's space. He's doing a great job of that so far, as he digs away and smothers the champion. A left splits Williams' guard, but the mandatory challenger counters with a right. Moments later, he adds another right. Andrade does not look comfortable right now. Williams looks to have his legs back and plenty of fight to go. (10-9 Williams, 39-36 Andrade)

facebook twitter whatsapp
Will Andrade turn up the volume even further or prolong the punishment? He's in complete, utter control through two, totally showing that he's on another level of boxing. Williams trying to dig and get inside of the champ's long reach, but his effort is mostly futile right now. After dancing on the balls of his feet, Andrade blasts Williams with a left uppercut followed by a right hook. He can drop Williams again with another power shot. Williams is doing better getting inside now — something that Andrade has to be cautious about. (10-9 Andrade, 30-26 Andrade)

What an opening round from the champ. Let's see how he follows that and how Williams responds. Andrade floating, moving exceptionally well, while popping that jab. Straight left lands and a right uppercut follows from Andrade. Williams' legs were briefly wobbly again. Williams finally gets on the inside and lands an overhand right to the head. But Andrade responds seconds later with a right-left right down the middle for a knockdown! Oh my! Williams looks to his corner and gets up at nine.

facebook twitter whatsapp
Andrade with a quick flurry and fancy footwork to go with it. A big left hand has Williams wobbly! Williams' eye is injured already. Wow. Early fireworks from Andrade, who usually starts off hot. Williams still doesn't have his legs back yet. Straight left splits Williams' guards and lands with plenty of sting. Uppercut from the champ follows moments later. (10-9 Andrade)

facebook twitter whatsapp
Williams has made his ring walk and here comes the WBO middleweight champion of the world, Andrade, who is making his ring walk to the late, great DMX's "Get at Me Dog."

Will Andrade deliver a statement win?

Andrade has been yearning for a fight with Saul 'Canelo' Alvarez or Gennadiy Golovkin for some time now. Will he get closer to either with a statement victory or does a game Liam Williams pull off the upset? We're about to find out.

"They call him 'The Machine,'" Andrade says of Williams during a DAZN promo. "He's going to be the rust bucket when I get done."

The Andrade vs. Williams main event is minutes away

Gongora gets the KO!

Gongora ends it 2:17 into the eighth round with a slashing left hand that makes Pearson backpedal and fall to the canvas. Pearson popped right up off the canvas, but took a knee back down to the mat at the count of seven, as he was counted out.

Carlos Gongora ends it with an 8th round KO 💥 pic.twitter.com/u22vnfsdnB

Gongora really shut that right eye of Pearson and the injury was giving him too much trouble there to continue. Gongora did an excellent job of pounding the body, before going upstairs and doing enough damage to get the knockout. Gongora landed 50 percent of his power punches in this dominating performance.

facebook twitter whatsapp
Gongora blasts Pearson's right eye with a slashing left cross to end the seventh round. Pearson is taking a lot of punishment.

Meanwhile, Andrade is getting ready

All Gongora through six

facebook twitter whatsapp
The sixth round offers a strange moment when the referee warns Pearson about pushing Gongora's head down in the clinch and Pearson swats the ref's hands away, drawing a more severe warning. The round ends with Gongora really turning up the volume and popping up Pearson's head with a vicious left uppercut against the ropes. 60-54 Gongora