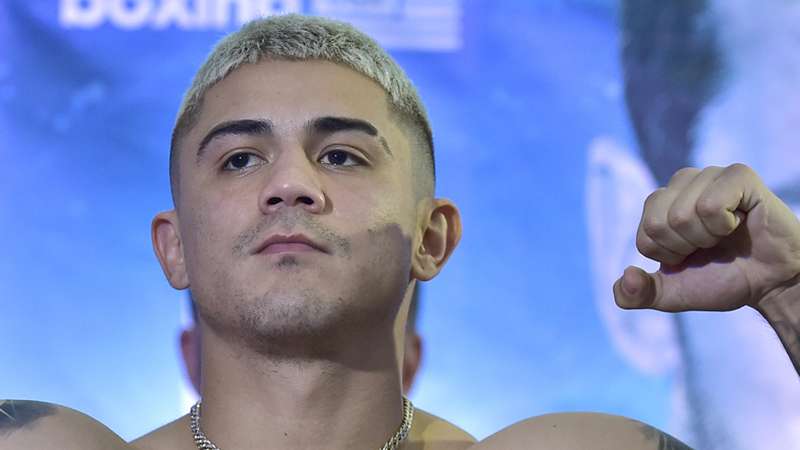 The win was the first major title for the 2012 United States Olympian. Now, the sky is the limit for Diaz as he heads into his first title defense on Saturday night against Shavkatdzhon Rakhimov from the Fantasy Springs Resort Casino in Indio, Calif. The card can be seen exclusively in over 200 countries on DAZN.

Ahead of the fight, Diaz spoke with DAZN News about becoming a dad for the first time, if being a father changed his view on boxing, if he's worried about Rakhimov will be on PEDs come fight night and whether a victory makes him the top dog at 130 pounds.

DAZN News: 2020 started so great for you. An outstanding performance against Tevin Farmer in Miami a couple of days before the Super Bowl to become a world champion for the first time. Then COVID-19 strikes, and the world takes a turn for the worst. Do you still view 2020 a big success because you became a world champion, or do you feel like there was a lot left to be desired?

Joseph Diaz Jr.: As far as my professional boxing career, I feel like 2020 was a great year because I won the world title. That was a dream come true. Ever since I was a little kid, I always wanted to win a world title. I thought after that I was going to fight at least two more times in 2020. But like you said, COVID hit, and everything started getting shut down. I still had a great 2020 because, during that time, I was able to get my girlfriend pregnant and take care of her and make sure that my baby boy, Zenith, was extremely healthy. It was good taking some time for boxing because I was able to live a normal life.

I was able to enjoy my food. I made sure that my baby was OK and made sure that my girlfriend was OK. During all this time, I didn't have to stress about going to the gym, working out and having a training camp and not seeing my girl, and not taking her to her appointments and all that stuff. It was very beneficial for me. I feel like 2020 was the best year of my life because my son was born, and just seeing my son being born and seeing my girlfriend giving birth was just such an amazing feeling, man. It was a feeling that I never felt before. I always wanted a baby born. I always wanted a family, and for me to meet my dream girl and to have a kid, it was just a blessing in disguise. I feel like everything just fell right into place where I was able to take some time off in my boxing career. After my baby was born, I ended up getting the fight date, and it started locking in again.

DN: How did becoming a dad change your perspective on your boxing career?

DN: Where do you think your career would be right now if you didn't lose that fight to Gary Russell Jr.?

JD: Boxing's a f—ing tough sport man. I already had three opportunities to become a world champion where I could fight Gary Russell Jr. Unfortunately, I didn't win that fight. And it was already not going my way and building up my way in the rankings, where I had to be again to fight for another world title. I fight Jesus Ross, and I didn't make the weight because I wasn't cut for 126 pounds anymore. I had to move up in weight. I feel like if I wouldn't have won the Tevin Farmer fight, I don't know where I would be right now, to be honest.

I don't know if I would have people taking advantage of me, putting me on lowball cards, and not giving me the exposure that I still need knowing that I have two losses. I'm a talented fighter. Just because I lost those two, they're going put me in the back of the sidelines again. Boxing is a tough sport. That's why I take my job very seriously. For that way, I always make sure that I'm getting opportunities to get out there and to make money financially for myself and my family.

DN: Based on what you just said, do you feel like going into the Farmer fight you were fighting for your future?

JD: Absolutely. Every single time I'm fighting, that's what I'm thinking about. I'm thinking about my future. I'm thinking about if I lose this fight or if I don't look good, I'm not going to get opportunities. I got to always impress. That's why every fighter should be thinking, especially the ones coming up in the rankings. Every fighter should be thinking that way because in boxing, if you know don't have any other backup or if you're just brought up in boxing and the amateurs, and didn't go to school and not focusing on having something to fall back on, then you really got to take this s—t seriously. Boxing is a f—ing cruel sport. It will eat you alive. The people in the foxhole will eat you alive and don't take advantage of you. So you got to make sure that you're taking all responsibility inside that training in the gym. That way, when you do fight, you can look at Impressive, you can entertain, you could gain fans, and you could gain a promotional deal. You could also gain bigger fights and bigger cards to generate money for yourself and your future.

DN: You look at Rakhimov, and he's good. You can't take nothing away from 15-0 with 12 wins by knockout. But something you had said in an interview I was listening to about him and alleged PED use going into his last fight. I know testing is getting done in the lead-up. Are you concerned at all though that he's going to be on something might come?

JD: I honestly hope not. I honestly hope that he doesn't do some s—t like that. Because either way, no matter what he brings to the table, even if he could be on steroids, cocaine, or anything that night, he's still not going to take that belt for me. I'm well prepared. I'm ready to go out there and dethrone him. No matter what he's bringing to the table, even if he does try to come in and cheat, I'm going to go out there and perform at my best, and I'm going to be victorious. I've tried too hard day in and day out this whole camp, in my whole life, to be where I need to be and be where I need to be today in order to be successful. I'm not going to let some guy that's 15-0 and not that experienced as a professional fighter come and dethrone me. I'm going to go out there and showcase my talents and showcase to everybody that I'm the best out at 130 pounds.

DN: What does a victory mean for you, and does a win solidify yourself as the top guy at 130?

JD: I think a victory Saturday night makes me the top guy at 130 pounds, no doubt. After I beat the best fighter in Tevin Farmer, I feel I should already be named the best at 130 pounds. But I got to fight this man. He's a dangerous opponent. He's going to be coming forward. He's ranked highly in the rankings. He's ranked in the top ten. He's ranked number one by the IBF. This guy ain't no joke. It's not like I'm fighting the guy that is not ranked at all and just defending my title like that. Nah, man. I'm fighting a really tough opponent that is going to be live and hungry that night. I think victory on Saturday night that I should be ranked one at 130 pounds. No doubt.